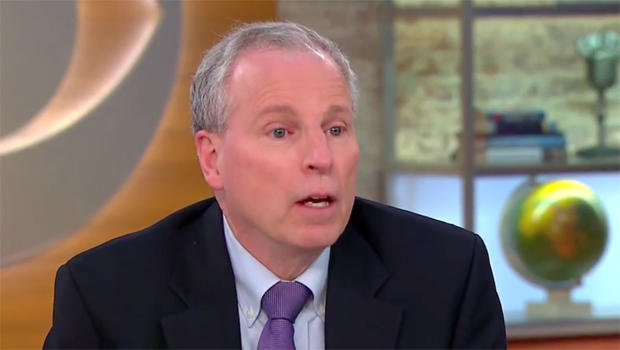 Robert Ford, the last American to serve as Ambassador to Syria, said Monday that despite Thursday’s missile strikes ordered by President Trump against a Syrian airbase following a chemical weapons attack, Syrian President Bashar Al-Assad will continue to test the U.S. with another chemical attack.

Ford served as Ambassador from 2011 to 2014. He left Syria in 2012, one year into the bloody civil war, because of security concerns. He is now a Kissinger Fellow at Yale University, and a Senior Fellow at the Middle East Institute in Washington.

Despite calls for regime change in Syria, Ford said he does not believe America has the capacity to change the regime, because of the support Assad continues to receive from Russia and Iran. “What we would like to see is a negotiation between all the different sides to come up with a new government,” he said.

“With having leverage on the ground?” asked co-anchor Charlie Rose.

“Well, no negotiation works if you don’t have some leverage.”

Ford said he resigned as ambassador to Syria because he was frustrated at the Obama administration’s inability to get a negotiation with leverage. “The use of force?” asked co-anchor Norah O’Donnell.

“Some kind of military pressure. I didn’t want U.S. direct force involvement. I always wanted us to help Syrian fighters on the ground who themselves wanted to negotiate.”

Rose asked, “People say unless you can threaten [Assad’s] survival, nothing else will change his behavior?”

“I think unless you put really great pressure on him so that he’s actually not winning but losing, he will have no incentive to negotiate,” said Ford.

Ford pointed out that Assad was feeling pressure at one point.

“The Russians and the Iranians have said they will meet force if there is another attack,” Rose said. “What does that mean? Where are we going? Is this a slippery slope into some kind of limited war with Russia and Iran?”

“The Iranians do have the capability to get back at us,” Ford replied. “For example, they could get back at us with our troops that are now in Iraq. So that’s going to be a tricky diplomatic challenge, Charlie, to both maintain deterrence against Assad using chemical weapons, but also deterring the Iranians from hitting back at us in a place like Iraq where our soldiers are very close to Iranian soldiers and Iranian militias.

“I think the most important thing right now is to re-establish deterrence against chemical weapons. That’s a distinct limited goal. It’s not a big goal like fixing the civil war -- just deterring the use of chemical weapons because that applies not just to Syria, but that also applies to Asia, applies to Africa.”

“Does that include chlorine gas?” asked Rose.

“But they have used chlorine gas after the talks.”

“I know that. And we could not get the Obama administration to react to that. Even after the 2013 deal with the Russians, Assad began using chlorine gas. That’s why I said, they test, they test and they test. “

“President Obama made the case, ‘Look, I didn’t act after the last big chemical attack in 2013 because instead I got something better; I got Russia to help remove a lot of these chemical weapons out of Syria,’” O’Donnell said. “But it’s clear they still remain.”

“The deal was flawed that way in that we could not get the Russians to enforce it,” Ford said. “There was an agreement in 2013 that if Assad even used chlorine gas, that the Russians and the Americans would take measures. The Russians didn’t keep their end of the bargain.”

“The Islamic State draws recruits from the frustrations of people in Syria, the Sunnis in Syria, who are angry at Assad largely,” Ford replied, “and therefore the idea that we can just bomb ISIS and then leave Syria isn’t going to work, because we’ll kill extremists, ISIS will recruit more; we’ll kill more, they’ll recruit more. It ends up being what writer Dexter Filkins called a ‘forever war.’”

Education was a lifeline for this Syrian immigrant. Now he's helping others.
More
David Morgan