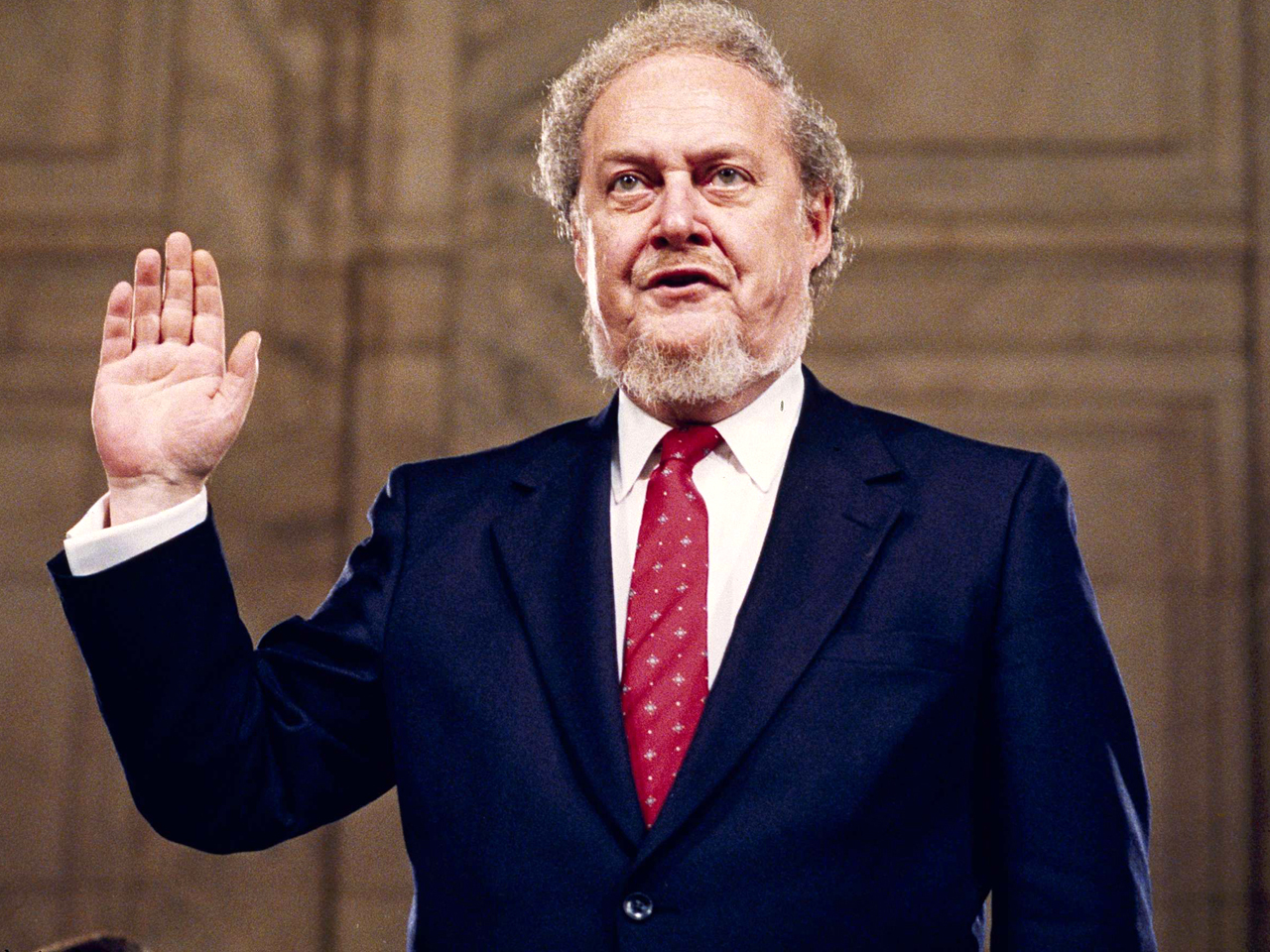 MCLEAN, Va. Robert H. Bork, who stepped in to fire the Watergate prosecutor at Richard Nixon's behest and whose failed 1980s nomination to the Supreme Court helped draw the modern boundaries of cultural fights over abortion, civil rights and other issues, has died. He was 85.

A spokesman for the Washington think-tank Hudson Institute where Bork was a distinguished fellow confirmed his death to CBS News.

Brilliant, blunt, and piercingly witty, Robert Heron Bork had a long career in politics and the law that took him from respected academic to a totem of conservative grievance.

Along the way, Bork was accused of being a partisan hatchet man for Nixon when, as the third-ranking official at the Justice Department he fired Watergate special prosecutor Archibald Cox in the Saturday Night Massacre of 1973. Attorney General Elliot Richardson resigned rather than fire Cox. The next in line, William Ruckelshaus, refused to fire Cox and was himself fired.

Bork's drubbing during the 1987 Senate nomination hearings made him a hero to the right and a rallying cry for younger conservatives.

The Senate experience embittered Bork and hardened many of his conservative positions, even as it gave him prominence as an author and long popularity on the conservative speaking circuit.

"Robert Bork was a giant, a brilliant and fearless legal scholar, and a gentleman whose incredible wit and erudition made him a wonderful Hudson colleague," said Hudson Institute head Kenneth Weinstein.

Known before his Supreme Court nomination as one of the foremost national experts on antitrust law, Bork became much more widely known as a conservative cultural critic in the years that followed.

His 1996 book, "Slouching Towards Gomorrah: Modern Liberalism and American Decline," was an acid indictment of what Bork viewed as the crumbling ethics of modern society and the morally bankrupt politics of the left.

"Opportunities for teen-agers to engage in sex are ... more frequent than previously; much of it takes place in homes that are now empty because the mothers are working," Bork wrote then. "The modern liberal devotion to sex education is an ideological commitment rather than a policy of prudence."

Bork, known until his death as "Judge Bork," served a relatively short tenure on the bench. He was a federal judge on the nation's most prestigious appellate panel, the U.S. Court of Appeals for the D.C. Circuit, from 1982 until 1988, when he resigned in the wake of the bitter Supreme Court nomination fight.

Earlier, Bork had been a private attorney, Yale Law School professor and a Republican political appointee.

At Yale, two of his constitutional law students were Bill Clinton and Hillary Rodham.

Nixon named Bork as solicitor general, the administration's advocate before the Supreme Court, in January 1973.

Bork served as acting attorney general after Richardson's resignation, then returned to the solicitor general's job until 1977, far outlasting the Nixon administration.

Long mentioned as a possible Supreme Court nominee, Bork got his chance toward the end of Ronald Reagan's second term. He was nominated July 1, 1987, to fill the seat vacated by Justice Lewis F. Powell.

Nearly four months later the Senate voted 58-42 to defeat him, after the first national political and lobbying offensive mounted against a judicial nominee.

It was the largest negative vote ever recorded for a Supreme Court nominee.

Reagan and Bork's Senate backers called him eminently qualified — a brilliant judge who had managed to write nearly a quarter of his court's majority rulings in just five years on the bench, without once being overturned by the Supreme Court.

Sen. Edward Kennedy, D-Mass., summed up the opposition by saying, "In Robert Bork's America there is no room at the inn for blacks and no place in the Constitution for women."

Critics also called Bork a free-speech censor and a danger to the principle of separation of church and state.

Bork's opponents used his prolific writings against him, and some called him a hypocrite when he seemed to waffle on previous strongly worded positions.

Despite a reputation for personal charm, Bork did not play well on television. He answered questions in a seemingly bloodless, academic style and he cut a severe figure, with hooded eyes and heavy, rustic beard.

Stoic and stubborn throughout, Bork refused to withdraw when his defeat seemed assured.

The fight has defined every high-profile judicial nomination since, and largely established the opposing roles of vocal and well-funded interest groups in Senate nomination fights. Bork would say later that the ferocity of the fight took him and the Reagan White House by surprise, and he rebuked the administration for not doing more to salvage his nomination.

The process begat a verb, "to bork," meaning vilification of a nominee on ideological grounds. In later years, some accused Bork of borking Clinton nominees with nearly the zeal that some liberal commentators had pursued him.

Bork denied any animus, and said he was happy commenting, writing and making money outside government. Even friends did not entirely believe that.

"He was very embittered by the experience," said lawyer Andrew Frey, a longtime friend who worked for Bork in the solicitor general's office. "He was not well treated, and partly as a result of that he did become more conservative."