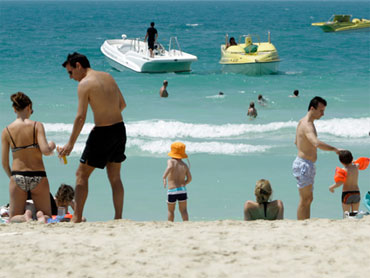 Rip currents are invisible underwater hazards that get many beachgoers in trouble. Sometimes, big trouble.

But there are things you could do to improve your chances of making it out of one, says Beach Supervisor John Skudin of Long Beach, N.Y., on Long Island.

"First (and foremost)," he told "Early Show" co-anchor Harry Smith Monday, "don't panic. It's not a current that takes you down. It might take you out. So the idea is to not panic. Float it out. Swim where it's not - basically, parallel to shore. And then come in where there is no rip current, because the rip current is not going to last the entire width of the beach."

Panicking is the worst thing you can do, Skudin says. It makes you tired, and that's "when trouble sets in. So, it's easier said than done to stay calm, especially if you're not a swimmer, but that's really the key is to stay calm, move to the side parallel to the beach and then come in where it's not. (Yet) try to draw attention to yourself so the lifeguards can see you.

And positioning yourself parallel to the beach is the next key. At some point, the rip current "won't be pulling you out anymore. Basically, the water comes in from a rip current, the way it forms, the water will come in typically with a set of waves. Now, the water wants to rush out and sometimes it rushes out in only one area of the beach. So when that one area of the beach runs out, the water is running out in one area. And a lot of times, that rip current won't last forever either. It will dissipate. Especially the further away you get from the shore, it dissipates, it's not as strong. Then you're not fighting as much. Then, when you move parallel, you'll feel it not pulling you at all anymore, and then you'll be able to, hopefully, move in on your own" or get a lifeguard to help you.

Separately, Skudin stressed that, at any time, "alcohol and swimming don't mix. So, if you're going to be drinking, you shouldn't be swimming.

Also, "Be careful of the sun. We have a lot of cases where people are dehydrated from partying the night before or drinking during the day, so make sure to drink lots of water and be very aware of your body."