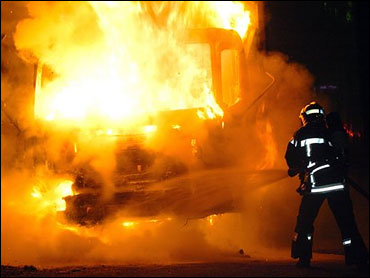 Youths fired at police and hurled flaming Molotov cocktails at churches, schools, cars and a daycare center in an 11th night of violence in France, sending a "shock wave across the country," according to national police chief Michel Gaudin.

Police say vandals burned 1,408 vehicles across France, setting a new high for overnight arson attacks since the unrest started Oct. 27. The figure was an increase from the 1,295 vehicles torched the night before.

"We are witnessing a sort of shock wave that is spreading across the country," Gaudin said, noting that the violence appeared to be sliding away from Paris and worsening elsewhere in France.

The rioting erupted Oct. 27 after two teenagers of north African descent were accidentally electrocuted as they hid in a power substation, apparently believing police were chasing them. Anger was then fanned anew days ago when a tear gas bomb exploded in a mosque in Clichy-sous-Bois — the northern suburb where the youths died.

The violence has prompted soul-searching about how to ease anger and frustration among troubled youths in France's grim public housing estates, where many residents are minorities. Educators met the French prime minister to think of ways to help.

"These are young people who are generally resigned, they face discrimination everywhere, for housing and work, and their malaise gets expressed in violence," said Ahmed Touabi, principal of an elementary school in the Paris suburb of Argenteuil. The troublemakers "feel rejected by France, and they want to spit on France."

Police said Monday that 395 people have been arrested nationwide.

Ten riot police were injured by youths firing fine-grain birdshot in a late night clash in the southern Paris suburb of Grigny, national police spokesman Patrick Hamon said. Two were hospitalized but police say their lives are not in danger.

It is the first time police were injured by weapons fire since the unrest started nearly two weeks ago.

The violence came in open defiance to a warning by French President Jacques Chirac, who has vowed to clamp down on the troublemakers.

"The law must have the last word," Chirac said Sunday after a security meeting with top ministers, making his first public address on the riots. France is determined "to be stronger than those who want to sow violence or fear, and they will be arrested, judged and punished."

Arsonists burned two schools and a bus in the central city of Saint-Etienne and its suburbs, and two people were injured in the bus attack. Churches were reportedly set ablaze in northern Lens and southern Sete.

Police say in Colombes, a suburb of Paris, youths pelted rocks at a bus, sending a 13-month-old child to the hospital with a head injury, and a daycare center was burned in Saint-Maurice, another Paris suburb.

In Asnieres Sur Seine, a film studio and movie warehouse was torched; in Villejuif, a transformer was set on fire.

Much of the youths' anger has focused on law-and-order Interior Minister Nicolas Sarkozy, who inflamed passions by referring to troublemakers as "scum."

In Strasbourg, youths stole a car and rammed it into a housing project, setting the vehicle and the building on fire.

"We'll stop when Sarkozy steps down," said the defiant 17-year-old driver of the car, who gave his name only as Murat. Under arrest, he and several others awaited a ride to the police station as smoke poured from the windows of the housing project behind them.

Sarkozy said he planned to visit the two hospitalized police officers. It was unclear whether they were shot with hunting rifles or a less lethal weapon, the interior ministry spokesman said. One was wounded in the neck, the other in the legs.

The tough-talking interior minister said police must restore law and order to France, or gangs and extremists would fill the void.

"Order has to return to all the neighborhoods of our territory. This is not a choice, it is an obligation. We will take the time we need, but order has to come back," said Sarkozy. "When someone shoots at a police truck with real bullets he's a hooligan. When someone sets fire to a bus and throws flammable liquid at a handicapped person, he is a criminal."

Australia is the latest country to issue a travel warning, joining the United States and Russia in warning citizens to stay away from violence-hit areas.

From an outburst of anger in suburban Paris housing projects, the violence has fanned out into a nationwide show of disdain for French authority from youths, including the children of Arabs and black Africans angered by high unemployment, poor housing and discrimination.

The country's biggest Muslim fundamentalist organization, the Union for Islamic Organizations of France, issued a fatwa, or religious decree. It forbade all those "who seek divine grace from taking part in any action that blindly strikes private or public property or can harm others."