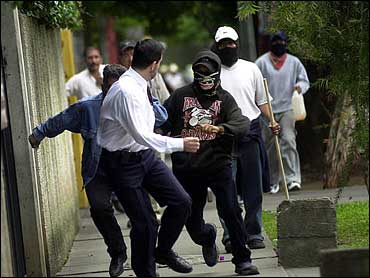 Protesters demanding that Guatemala's former dictator be allowed to run for president touched off a wave of violence that paralyzed the capital and shut down the U.S. Embassy.

Police refused to respond as club-wielding rioters smashed windows, burned parked cars and blocked traffic Thursday, apparently believing that would only provoke more violence. President Alfonso Portillo pleaded for order and vowed to "defend democracy and the rule of law in Guatemala with my own life."

A 65-year-old television reporter, Hector Ramirez, died of a heart attack while running from protesters who attacked journalists. There were no reported arrests and no reliable estimates on the number of people injured.

Demonstrators demanded former dictator Efrain Rios Montt be allowed to run in Nov. 9 elections. The country's highest tribunal, the Court of Constitutionality, has already approved his candidacy, but a ruling by the lower Supreme Court has delayed Rios Montt's registration as a candidate.

Demonstrators, many with machetes or clubs, smashed windows, burned parked cars and blocked traffic along the city of more than 1.5 million's main thoroughfares. The U.S. Embassy closed as a precaution.

Most of the protesters disbanded late Thursday. Early Friday, several hundred Rios Montt supporters remained outside the Constitutional and Supreme Courts and several buildings belonging to the Justice Department.

"We will not rest until the general is allowed to run for president," said a protester who refused to give his name.

Mediators from the Washington-based Organization of American States were meeting with opposition party leaders and human rights groups early Friday. Rios Montt and Portillo are political allies and both members of the Guatemalan Republican Front, which has a majority in Congress.

The uprisings began at dawn Thursday when 250 masked students armed with clubs gathered at a mall in southern Guatemala City. They were joined by thousands of Rios Montt supporters arriving from outside the capital.

More than 5,000 protesters flooded distinct points of the city of more than 1.5 million, surrounding the U.S. Embassy, the judicial plaza and a luxurious office building in the heart of a key financial district.

Portillo ordered soldiers to restore the peace but defense officials ignored him. Many speculated on radio stations that officials did not want Portillo to declare a state of emergency, thus suspending the electoral process and further delaying a Rios Montt presidential campaign.

A retired brigadier general and former evangelical minister, Rios Montt, now 77, took power in a military uprising in March 1982 and was overthrown 18 months later. Rios Montt's attempts to run for president in 1990 and 1995 were barred by the Constitutional Court on grounds that the constitution prohibits former coup leaders from seeking the presidency. He was chosen as head of the legislature in January 2000.

In Washington, U.S. State Department spokesman Richard Boucher called the uprisings "an affront to democracy and freedom of assembly," and said they were "a dangerous mockery of the right to protest."

"They consider us vandals, animals, troublemakers and fools," he said. But "that doesn't mean we provoked or organized these protesters that brought so much violence."

Human rights groups say Rios Montt's military government was responsible for some of the worst atrocities during Guatemala's 1960-1996 civil war, but he remains relatively popular and would be a strong presidential candidate.
By Juan Carlos Llorca