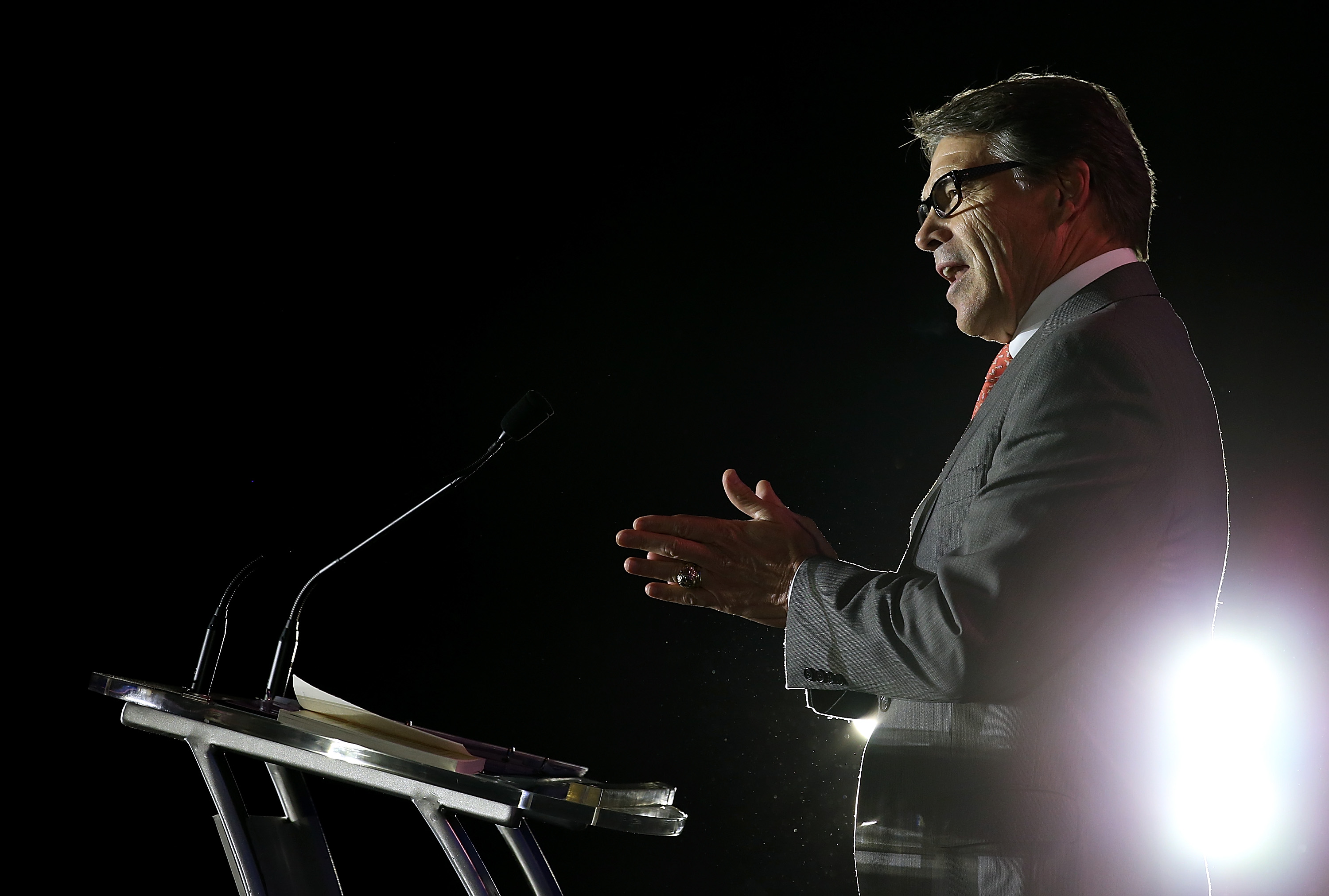 AUSTIN, Texas -- A grand jury has indicted Texas Republican Gov. Rick Perry on two felony counts of abuse of power for making good on a veto threat - a case the possible 2016 presidential hopeful is dismissing as nakedly political, but which his opponents say is just deserts.

The indictments for abuse of official capacity and coercion of a public servant came late Friday, after a special prosecutor spent months calling witnesses and presenting evidence that Perry broke the law when he carried out a promise to nix $7.5 million over two years for the public integrity unit run by the office of Travis County District Attorney Rosemary Lehmberg. The Democratic official was convicted of drunken driving, but refused Perry's repeated calls to resign.

The case means the longest-serving governor in state history also became the first Texas governor since 1917 to be indicted. Abuse of official capacity is a first-degree felony with potential punishments of five to 99 years in prison. Coercion of a public servant is a third-degree felony that carries a punishment of two to 10 years.

Though the charges are serious, politics are sure to dominate the case. Lehmberg is based in Austin, which is where the grand jury was seated and is heavily Democratic. That's in stark contrast to much of the rest of Texas, which is fiercely conservative - so much so that a Democrat hasn't captured statewide office in 20 years.

Still, while Perry says he did nothing wrong in issuing the veto, simply having the word "indictment" associated with him could tarnish his image and complicate his prospects with 2016 GOP primary voters - should he try again for the White House.

When he ran for president in 2012, Perry plummeted from brief front-runner to national punchline, his once promising campaign doomed by a series of embarrassing gaffes, including his infamous "Oops" moment during a debate. This time, he's re-made his cowboy image, donning stylish glasses, studying up on foreign and domestic affairs and promising that he'll be far more humble in the national spotlight.

The unit Lehmberg oversees investigates statewide allegations of corruption and political wrongdoing. It led the investigation against former U.S. House Majority Leader Tom DeLay, a Texas Republican who in 2010 was convicted of money laundering and conspiracy to commit money laundering for taking part in a scheme to influence elections in his home state - convictions later vacated by an appeals court.

Perry himself was never called to testify in this case,- but many of his top aides were. David L. Botsford, Perry's defense attorney, whose $450-per hour fees are being paid for by state funds, said he was "outraged and appalled" by the grand jury's decision.

"This clearly represents political abuse of the court system and there is no legal basis in this decision," Botsford said in a statement. "Today's action, which violates the separation of powers outlined in the Texas Constitution, is nothing more than an effort to weaken the constitutional authority granted to the office of Texas governor, and sets a dangerous precedent by allowing a grand jury to punish the exercise of a lawful and constitutional authority afforded to the Texas governor."

Democrats, for their part, didn't miss a change to gloat.

"Texans deserve real leadership and this is unbecoming of our governor," Texas Democratic Party Chairman Gilberto Hinojosa said in a statement. He demanded that Perry immediately resign.

No one disputes that Perry is allowed to veto measures approved by the Legislature, including parts of the state budget. But the left-leaning, Austin-based Texans for Public Justice government watchdog group filed an ethics complaint accusing the governor of coercion because he threatened to use his veto before actually doing so in an attempt to pressure Lehmberg to quit.

Michael McCrum, the San Antonio-based special prosecutor overseeing the case, said he "took into account the fact that we're talking about a governor of a state - and a governor of the state of Texas, which we all love."

"But when it gets down to it, the law is the law," McCrum said.

Perry and other high-profile Republicans said Lehmberg should resign after she was arrested and pleaded guilty to drunken driving in April 2013. A video recording made at the jail showed Lehmberg shouting at staffers to call the sheriff, kicking the door of her cell and sticking her tongue out. Her blood-alcohol level was nearly three times the legal limit for driving.

The indictment of Perry is the first of its kind since 1917, when James "Pa" Ferguson was indicted on charges stemming from his veto of state funding to the University of Texas in an effort to unseat faculty and staff members he objected to. Ferguson was eventually impeached, then resigned before being convicted.