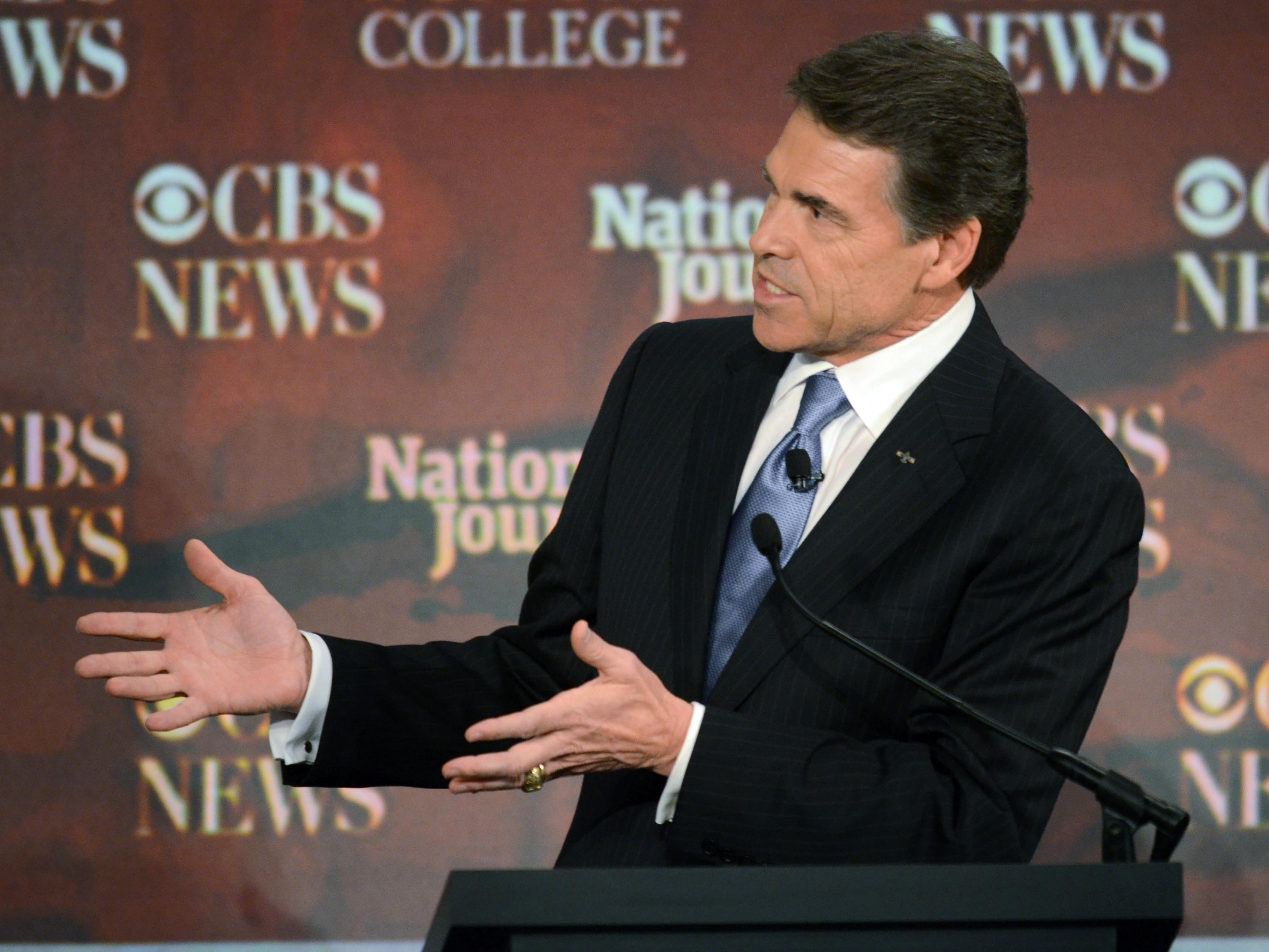 Texas governor Rick Perry's pledge Tuesday to dramatically reshape the federal government is the latest volley in the Perry campaign's aggressive push to reboot Perry's candidacy in the wake of that infamous "oops" momentthat staffers are hoping won't be remembered as the defining moment of the campaign.

Perry went on a well-orchestrated PR offensive in the wake of last week's widely-mocked debate gaffe, doing a spate of television interviews and even showing up on CBS' The Late Show With David Letterman to read a top-ten list. The damage control effort, in which Perry offered a consistent and clear message, was seen as far superior to rival Herman Cain's initial, inconsistent response to the revelation that he had been accused of sexual harassment in the past.

One top staffer told Hotsheet that Perry emerged from the interviews energized and optimistic; he went on to a better-than-expected performancein the CBS News/National Journal foreign policy debate on Saturday, avoiding gaffes and memorably vowing to have foreign aid allotments start at zero in his administration.

Now Perry is vowing a "complete overhaul" of Washington that would end lifetime appointments for federal judges; cut Congressional salaries and budgets in half to create a "part-time, citizen Congress"; back legislation to require a two-thirds majority for a tax increase; cap federal spending to 18 percent of GDP; pass a balanced budget amendment; and privatize Fannie Mae and Freddie Mac. (He would also, of course, get rid of those three federal agencies -- Commerce, Education, and, ahem, Energy.) This follows Perry's proposal for an optional flat taxthat would be an effective tax cut for the highest-income Americans.

Perry's efforts to change the conversation about his candidacy come as national polls show him in the single digits, having fallen from his onetime perch at the top of the polls amid a string of poor debate performances. In the first-in-the-nation voting state of Iowa, a new poll shows a four-way tie for first- and Perry, at 7 percent, is not among the leaders.

A finish outside the top three in Iowa would be a serious blow to Perry, particularly since Mitt Romney looks poised to take the New Hampshire primary a week later; if Perry fails to show much support in those states, he'll see negative media coverage and could see donations start to dry up. He could potentially make a push in another early state, South Carolina, where his southern roots may help. But Perry is also mired in the single digits there, and Herman Cain, whose radio show was long broadcast into the state from Atlanta, has a stronger natural advantage.

Still, it would be a mistake to write Perry off. For starters, his largely conservative record, outspoken evangelical beliefs, and status as a long-serving governor could still attract many Republican voters. And thanks to his large donor base in Texas - as well as his national connections from chairing the Republican Governor's Association - Perry has the most robust fundraising network in the field, with the possible exception of Mitt Romney. That means he can flood states with ads to boost his standing as Election Day approaches, and spend robustly on organization in Iowa to get his supporters to the polls. And with seven in 10 Republican primary voters telling CBS Newsit's too early to commit to a candidate, Perry has a legitimate opportunity to build back a base of support.

The question is whether steps like the one he is taking Tuesday will be enough to undo the self-inflicted damage that Perry has already endured. A few months ago, Perry was seen as the only GOP presidential candidate who could unite the Tea Party base and the GOP establishment; instead, he managed to alienate large swaths of both groups. Perry's reboot seems designed to present him as a crusading Washington outside promising substantial change; it's worth noting that Newt Gingrich is presenting himself in much the same way, though Perry (despite his time heading the RGA) can make it at least somewhat more plausibly.

Republican primary voters who have long been tuned into the race - and seen his comments on educating illegal immigrants, followed the dustup over the HPV vaccine, or watched him struggle in the debates - may well have given up on Perry. But there are a lot of voters who have yet to really tune in, and the Perry camp wants to introduce them to the rebooted version of Perry, stripped of the baggage that he's built up thus far. It's no easy task, but with a poll last month showing that about half of Americans were unable to name any of the GOP candidates, a recasting of the candidate isn't as impossible as political junkies might think.