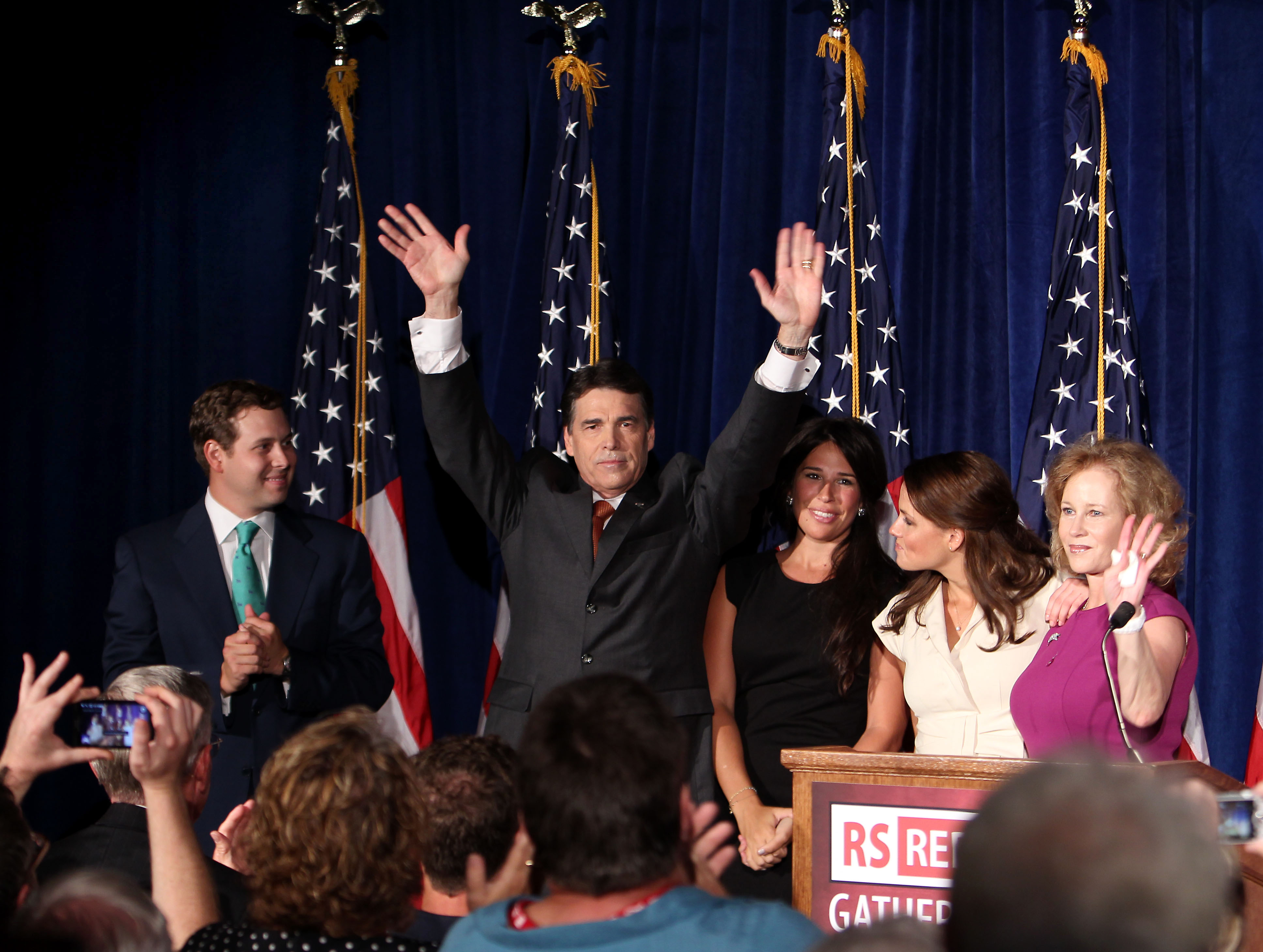 CHARLESTON, S.C. and AMES, Iowa -- Texas Governor Rick Perry announced his bid for the 2012 Republican nomination in South Carolina on Saturday with a speech grounded in attacks on President Obama for "downgrading" America.

"It's time to get America working again," Perry told 700 conservative activists packed into at Charleston hotel ballroom. "Page one of any economic plan to get American working is to give a pink slip to the current residents in the White House."

In South Carolina, host to the nation's third presidential primary, Perry vowed to apply what has worked in Texas during his ten years as governor to Washington - balancing the budget and cutting government spending.

"America is not broken, Washington, D.C., is broken," Perry said.

Perry enters the race as a serious contender for the nomination, one with the potential to combine establishment support (and the strong fundraising that comes with it) with the backing of social and fiscal conservatives.

Stylistically reminiscent of his predecessor as Texas governor who won the presidency - George W. Bush - Perry's calling card is Texas' strong record of job creation: 40 percent of the nation's new jobs since June 2009 are in Texas. The state's unemployment rate is about one-point below the national rate of 9.1-percent, and 25 states' are lower.

"One in six work-eligible Americans cannot find a full-time job -- that is not a recovery, that is an economic disaster," Perry said.

While Perry spent some of his speech discussing his own record, he spent most of his time attacking the current White House occupant. He criticized Mr. Obama's "unbridled fixation" on spending and suggested the president's "big spending, big government policies" have "prolonged our national misery, not alleviated it."

"Recovery is a meaningless word if the bank has foreclosed on your home, if you're underwater on your mortgage, or if you are up to the max on your credit card debt," he added. "Mister President, let us tell you something: You cannot win the future buy selling America off to foreign creditors. We cannot afford four more years of this rudderless leadership."

He called the $14 trillion federal government debt "generational theft" and attacked the president's handling of the debate over raising the nation's debt ceiling, during which time Standard and Poor's lowered the United States' credit rating to AA+ from AAA.

Change in America will not come from Washington, Perry said, but from the "wind-swept prairies of middle America, the farms and the factories from across this great land...patriots who will not be consigned to a fate of less freedom in exchange for more government."

Echoing a cry of the Tea Party wing of the Republican Party, Perry said it is an "injustice" that nearly half of all Americans do not pay any income taxes "and the liberals out there are saying that we need to pay more."

"As Americans, we realize, there is no taxpayer money that wasn't first earned by the sweat and toil of one of our citizens," he said.

He also labeled Mr. Obama's foreign policy an "incoherent muddle" and suggested the his polices were based on "failed Western European social values."

Perry made no mention of the wars in Afghanistan or Iraq, the military action in Libya, Arab Spring, al Qaeda, or terrorism, but displayed some rhetorical swagger.

"Look, it's pretty simple -- we're going to stand with those that stand with us, and we will vigorously defend our interests, and those who threaten our interests, harm our citizens, we will simply not be scolding you, we will defeat you," Perry said.

Obama campaign spokesman Ben LaBolt said after the speech that Perry's "economic record is no miracle - it's a tall tale," a reference to the so-called "Texas miracle." As Democrats are quick to note, many of the jobs created in Texas under Perry pay minimum wage.

"Governor Perry allowed special interests to write their own rules, hired corporate lobbyists to oversee corporations, and cut funding for programs that would create opportunity for middle class families," said LaBolt. "In a Republican field that has already pledged allegiance to the Tea Party and failed to present any plan that will benefit the middle class or create the jobs America needs to win the future, Governor Perry offers more of the same."

Perry made the announcement as many of his rivals were in Ames, Iowa, competing in the Republican party's quadrennial straw poll. The timing of his campaign launch was seen as an attempt to deflate any momentum to come out of the contest for Rep. Michele Bachmann, former Gov. Tim Pawlenty or the other contenders competing in Iowa.

Primer: What is the straw poll
Palin in Iowa: I'm not stealing the spotlight
Michele Bachmann makes last ditch appeal in Iowa

Perry traveled to New Hampshire later Saturday and goes to Iowa on Sunday for a three-day swing through the crucial first-in-the-nation voting state.

In South Carolina, Perry referred to himself as the governor "largest red state in America" and greeted the crowd of with a Texas-twanged "howdy."

His announcement speech ran little more than 20 minutes and began with tales of his childhood in rural Paint Creek, Texas, a place too small to have its own zip code.

Perry was the son of two tenant farmers who grew cotton and wheat in a home "centered on hard work and on faith and on thrift. He said, "Those values that have stayed with me my whole life."

Perry met his future wife, Anita, at a piano recital when he was eight years old, and they went on their first date when he was 16. They got married 16 years later.

"Nobody says I am not persistent," Perry quipped. The couple has two children.