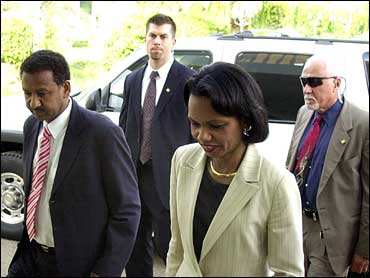 Secretary of State Condoleezza Rice held a congratulatory round of meetings with officials of the new unified Sudanese government Thursday, but expressed outrage after security forces manhandled aides and reporters accompanying her.

"It makes me very angry to be sitting there with their president and have this happen," she said. "They have no right to push and shove."

Rice made her remarks to reporters after she and her entourage boarded an airplane to fly from the Sudanese capital to a refugee camp in the western Darfur region.

The incident happened as Rice was about to meet with Sudan's President Omar el-Bashir inside his residence in Khartoum, said CBS News Reporter Charles Wolfson.

"Security officials from his office scuffled with Secretary Rice's senior staff and the press," reported Wolfson. "Some of the senior officials were not allowed into the meeting, and some of the press were kept outside as well. Jim Wilkinson, senior adviser to Rice, says 'We don't frankly appreciate being manhandled at the front door.'"

Click here to hear Wolfson's report on the incident.
After landing near the camp, State Department spokesman Sean McCormack said the Sudanese foreign minister had responded to Rice's demand for an apology by telephoning her aboard the plane to say he was sorry for what had happened in Khartoum.

"Diplomacy 101 says you don't rough your guests up," Wilkinson said as he and reporters were facing off with guards at the ultra-high-security residence.

The guards elbowed Americans and tried to rip a tape away from a U.S. reporter. At another point, Rice's interpreter and some other aides accompanying her were blocked at a gate.

Ambassador Khidair Haroun Ahmed, head of the Sudanese mission in Washington, attempted to smooth over the situation on the spot. "Please accept our apologies," he told the reporters and aides. "This is not our policy."

But there was yet another scuffle moments later when a U.S. television reporter tried to ask el-Bashir a question about his involvement with alleged atrocities.

Guards grabbed the diminutive reporter and muscled her toward the rear of the room as State Department officials shouted at the guards to leave her alone.

Describing Rice's meeting with el-Bashir, Wilkinson said, "She was very direct about the skepticism of the international community about their ability to improve Darfur."

U.S. officials said Sudanese officials repeatedly asked Rice to lift sanctions, but that she gave them no promises.

The session at el-Bashir's residence capped a morning of meetings before a visit to the western Darfur region, where the United States blames his government for recruiting and equipping militiamen to massacre rural villagers and burn their homes.

He denies government involvement, but the United States and international organizations say his military sent helicopter gunships to bomb small villages before raiders swept in with horses, guns and knives.

Rice's visit to the sprawling Abu Shouk refugee camp, the second-largest in the region, went more according to form.

After a bumpy and dusty ride from the airport, she was surrounded by children reaching for her hand and chanting: "Welcome, Welcome Condoleezza."

In the area she toured, some of the 70,000 displaced Darfur villagers had tried to add cheer to the hot, sandy expanse by planting pink and magenta flowers outside the doorways of their plywood and canvass huts.

Prior to her meeting with el-Bashir, Rice had said the United States is making a difference to relieve a refugee crisis and African peacekeeping troops are helping to stop atrocities.

"We are not where we were a year ago," Rice said Wednesday, ahead of her first trip to Sudan as secretary of state. "We are in a different circumstance and the United States has spent a great deal of money and a lot of diplomatic and other energy to try and bring this conflict to a conclusion."

War-induced hunger and disease have killed more than 180,000 people and driven more than 2 million from their homes in what Rice reaffirmed Wednesday was a case of genocide.

Sudan formed a new reconciliation government this month, following a peace agreement to end a 21-year-year civil war between the Muslim north and the mainly Christian and animist south that killed an estimated 2 million people.

The United States has held the Arab-dominated former government at arm's length, operating an embassy without a full ambassador and listing Sudan, Africa's largest country, among the nations sponsoring terrorism.

In addition to short-term humanitarian needs, the United States and others are trying to prevent the temporary camps from becoming permanent fixtures in Darfur.