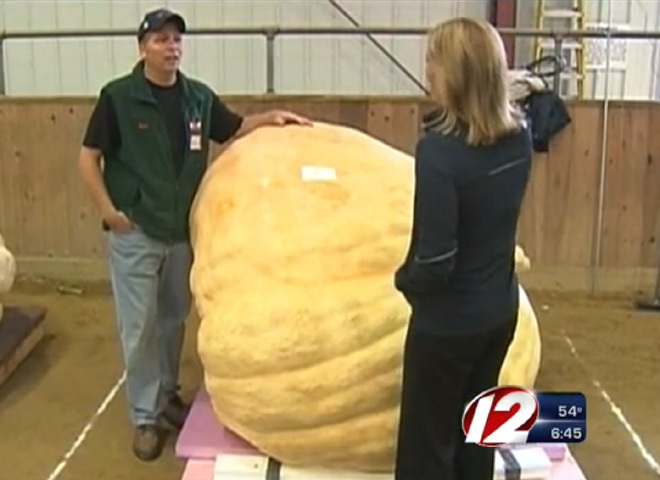 TOPSFIELD, Mass. Organizers of a fair in northeastern Massachusetts claim a Rhode Island man has set a new world record with the first pumpkin ever to weigh more than a ton.

Leaders of the Topsfield Fair say the huge gourd grown by Ron Wallace of Greene, R.I., tipped the scales at 2,009 pounds on Friday, winning him $5,500 for first place and another $10,000 as a bonus for breaking the one-ton mark.

The Guinness World Record for heaviest pumpkin is 1,810.5 pounds set by Chris Stevens of New Richmond, Wis., at the Stillwater Harvest Fest in Stillwater, Minn., in October 2010.

A New Hampshire man appeared to break the record on Thursday. Steve Geddes of Boscawen turned in a pumpkin weighing 1,843 pounds at the Deerfield Fair in Deerfield, N.H.

Wallace told CBS Affiliate WPRI that his hobby is more like an addiction that grows bigger every year.

"It's really a labor of love, from when you start the seeds in April to when you pick it," he said.

"Anybody can grow tomatoes and zucchinis and stuff like that. Put one of these in the ground and get hooked on 40-plus pounds a day for a few weeks at its peak growth, you'll never go back to growing vegetables again," said Wallace.