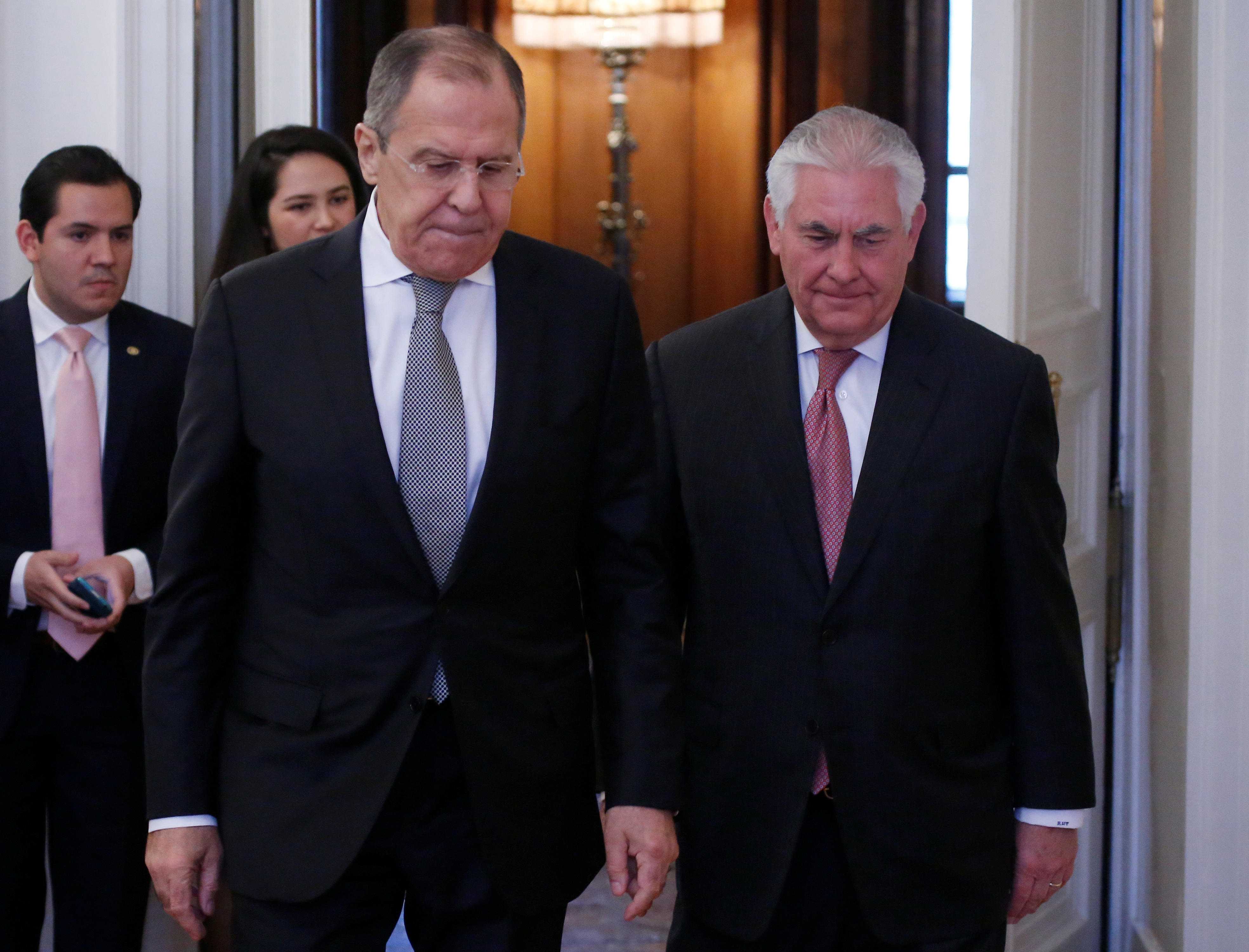 CBS News’ Kylie Atwood contributed to this report from Moscow.

U.S.-Russia relations are at a “low point,” Secretary of State Rex Tillerson said in a joint news conference Wednesday with Russian foreign minister Sergey Lavrov in which the two disagreed on so many points, it was as if they were holding separate press conferences.

“There is a low level of trust between our two countries,” Tillerson said,” following a two-hour meeting with Russian president Vladimir Putin in Moscow.

The relationship between the U.S. and Russia has become increasingly tense since President Donald Trump authorized a missile strike on a Syrian airbase last week in response to a deadly chemical weapons attack believed to have been carried out by Syrian President Bashar al-Assad’s regime. Tillerson said it is “conclusive” that Assad was behind the attack, while Russian officials — Syria’s strongest allies — have questioned whether chemical weapons were used at all. Lavrov said Russia wants a “frank investigation” by the Organization for the Prohibition of Chemical Weapons.

The two also differed on what to do with Assad, especially in light of last week’s attack. Tillerson — although he wouldn’t describe how Assad should leave power — said the Syrian president’s departure must happen in an “orderly” way. Asked whether the Syrian leader should be charged as a war criminal, Tillerson did not rule it out, saying only that it was “possible.”

In their meeting, Tillerson told Lavrov that better relations with the U.S. would require stepping away from Assad. That said, Tillerson indicated that it would be fine to bring representatives from Assad’s regime into Geneva negotiations but not Assad himself.

“A successful ouster of a dictator is very hard to remember,” Lavrov said.

The two also aired clashing remarks over alleged Russian intervention into the 2016 U.S. presidential election. Tillerson said such intervention is “well established,” and worthy of sanctions against the Kremlin, although there are no new sanctions at this time. But Lavrov said he had seen no evidence to support election meddling, despite “many” requests for proof.

“We want to hear concrete proof, and then we will respond accordingly,” Lavrov said.

The Moscow meeting was planned before last week’s apparent chemical attack in northern Syria. Mr. Trump, who has changed his tone on Russia since his inauguration, had blunt words for Putin before the press conference.

“Putin is backing a person that’s truly an evil person. And I think it’s very bad for Russia,” he said in and interview with Maria Bartiromo airing today on Fox Business Network.

Tillerson, on CBS News’ “Face The Nation” earlier this week, blamed the chemical attack in Syria on Russia’s “failure,” but said the U.S. has no information that Russia helped carry out the attack.

“Well, to our knowledge, we do not—we do not have any information that suggests that Russia was part of the military attack undertaken using the chemical weapons,” Tillerson said Sunday, amid reports that the U.S. is investigating possible Russian connection to the deadly sarin gas attack.

2:21 p.m. Lavrov said the U.S. has provided no evidence that it interfered in the 2016 election, despite “many” requests for such evidence.

“We want to hear concrete proof and then we will respond accordingly,” Lavrov said.

2:17 p.m. Tillerson said no changes are being made to sanctions on Russia at this time after its actions in Ukraine, although he called Russian interference in the election fairly well established, and a “serious issue” possibly worthy of sanctions.

2:11 p.m. Lavrov pointed out that the killing of Osama bin Laden did not remove terrorism.

“A successful ouster of a dictator is very hard to remember,” Lavrov said, inviting anyone to share a successful example with him.

2:02 p.m. Tillerson said the reign of the Assad family is “coming to an end,” and they have brought this on themselves.

1:59 p.m. As the conference opened up to questions, Tillerson said it is “conclusive” that Syrian president Bashar al-Assad’s regime is behind the chemical attack.

But Lavrov said Russia “insists” there be an investigation.

“As for the investigation into the incident, there is a fact-finding mission of the OPCW, there is also a joint mechanism for an investigation set out together by the OPCW and the United Nations,” Lavrov said.

1:50 p.m. “We frankly discussed the state of U.S.-Russia relations,” Tillerson said, saying that relation is at a “low point.”

“There is a low level of trust between our two countries,” Tillerson said.

1:46 p.m. Lavrov said Russia is trying to overcome the “pause” that has taken place in the White House with the transition to the new administration.

1:44 p.m. Lavrov said he and Tillerson also discussed Afghanistan, the Korean Peninsula and other matters.

1:40 p.m. Lavrov called the talks between Tillerson and himself “constructive.” Lavrov said they have “touched on” the chemical gas attack that took place in Syria last week, and the ensuing U.S. missile strike on a Syrian airbase.

“We have stated our position on many occasions,” Lavrov said, saying Russia wants a “frank investigation” of the chemical attack by the Organization for the Prohibition of Chemical Weapons (OPCW).