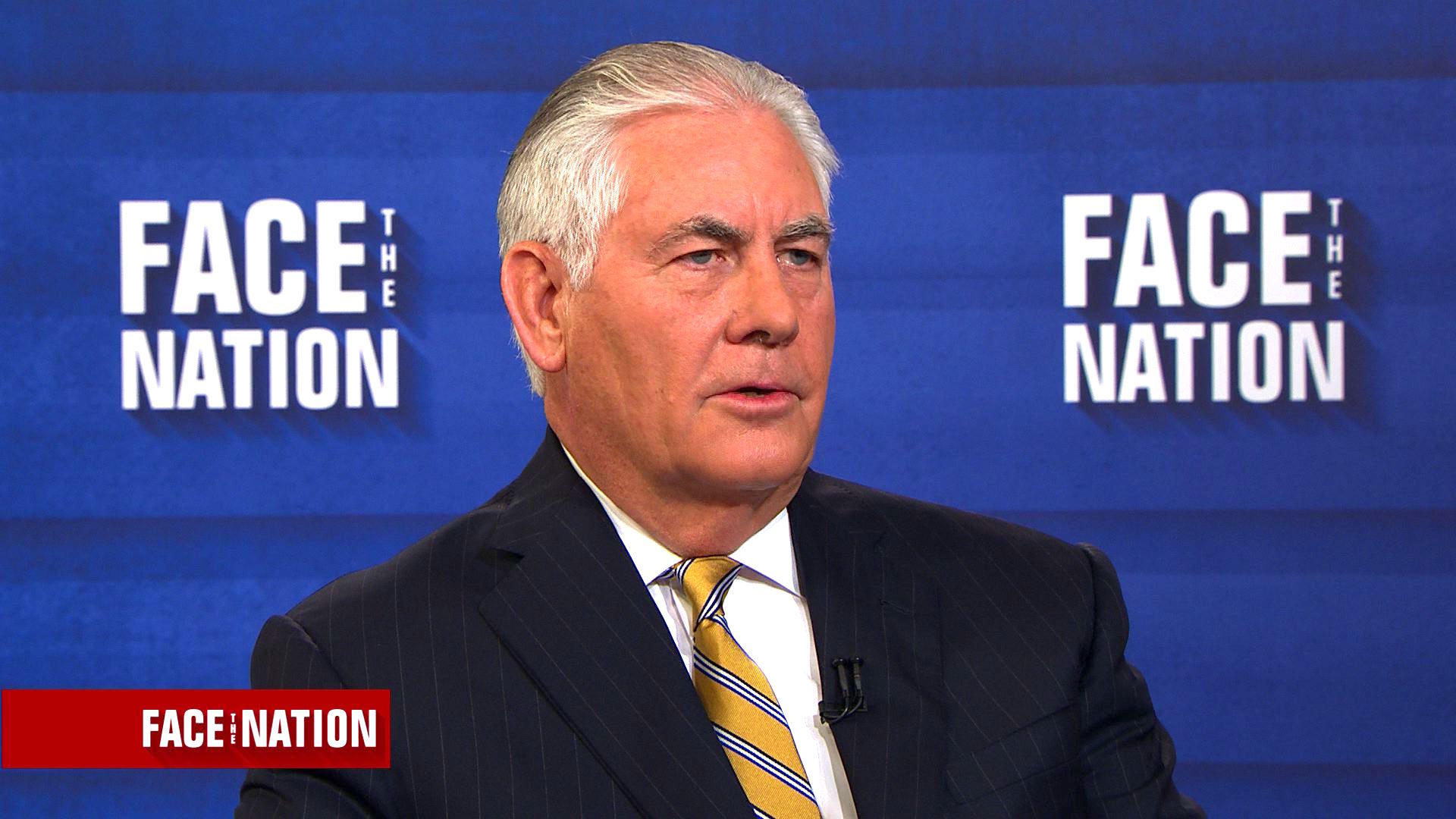 U.S. Secretary of State Rex Tillerson said Sunday that "our military option will be the only one left" if diplomatic efforts fail when it comes to North Korea.

"But to be clear, we seek a peaceful solution to this," he said.

Tillerson said U.S. policy toward North Korea "is to deny North Korea possession of a nuclear weapon and the ability to deliver that weapon." He said the United States' strategy has been "a peaceful pressure campaign" that is "enabled by the four no's."

He said the pressure campaign is built around "putting together the largest and strongest international coalition we can to send the same message to North Korea and to North Korea's neighbors, China and Russia, that this is the policy of the rest of the world."

"And you've seen that expressed now in two unanimous security council resolutions to impose the strictest sanctions ever. All of that designed to bring North Korea to the table for constructive, productive dialogue," Tillerson said.

In August, Tillerson said the North had demonstrated "some level of restraint," after the U.N. Security Council unanimously adopted sanctions against the North Korean government. He said it was worth noting that there had been "no missile launches" or new "provocative acts" by the North Koreans' since the resolution was adopted.

But just this past week, the regime fired yet another missile, this time over the Japanese city of Hokkaido -- a test that marked a big advance. It was the first time an intermediate range missile was launched from a mobile transporter.

On Sunday, Tillerson suggested that the onus now is mainly on China, as the nation is a principle supplier of oil to the North Korean regime -- something Tillerson said can be used as leverage.

"China has concerns about a regime collapse in particular and the impact it might have along their border. So this is also to assure the government of China that that is not our agenda either," said Tillerson.

"What we've said to them is, 'Look, you have the best information. You have your hand on the valve. You set the valve where you think it's going to create the message that you want to send to this regime that they must change the path they're on.' So we're put--leaving it in China's hands at this point," he said.

Asked if possible trade measures could be part of a bargaining chip with China if they chose not to act on the crisis, Tillerson said that President Trump has been "very clear that he views this threat of North Korea as ever growing."

"We've said from the beginning we don't have a lot of time left. We don't have a runway left to land this plane on. So we need China's assistance to bring them to the table," said Tillerson.

That assistance will likely be on the table and up for discussion for the two countries as the United Nations General Assembly meets for its annual gathering in New York this week. Tillerson said Mr. Trump's remarks before the international body will be a moment for him to deliver a message of unity and diplomacy to the global community.

"First he's going to promote and advocate for the strength of democratic values. And he's going to reinforce that it is those shared values that bind our alliances together and that have kept the world a stable place," Tillerson said of Mr. Trump's speech.

He added that the president will make the case that those values are currently "under attack" from threats like North Korea and terrorism.

"He is going to be very clear in terms of his view that that is what brings us together. That's what binds these nations together, makes us the most powerful, and also creates a stable world," said Tillerson.

While Mr. Trump has often been critical of the U.N., Tillerson said Mr. Trump "does believe the United Nations can be a very important instrument of addressing these threats to the world. But I think he also takes the view that the United Nations has fallen short. And he wants to motivate them in that regard."

As for the next move for the United States regarding North Korea, Tillerson said he's waiting for the North Korean regime to indicate they're ready to have "constructive, productive talks."

"We have tried a couple of times to signal to them that we're ready when they're ready," he said. "And they have responded with more missile launches and a nuclear test."

"All they need to do to let us know they're ready to talk is to just stop these tests, stop these provocative actions, and let's lower the threat level and the rhetoric," he added.