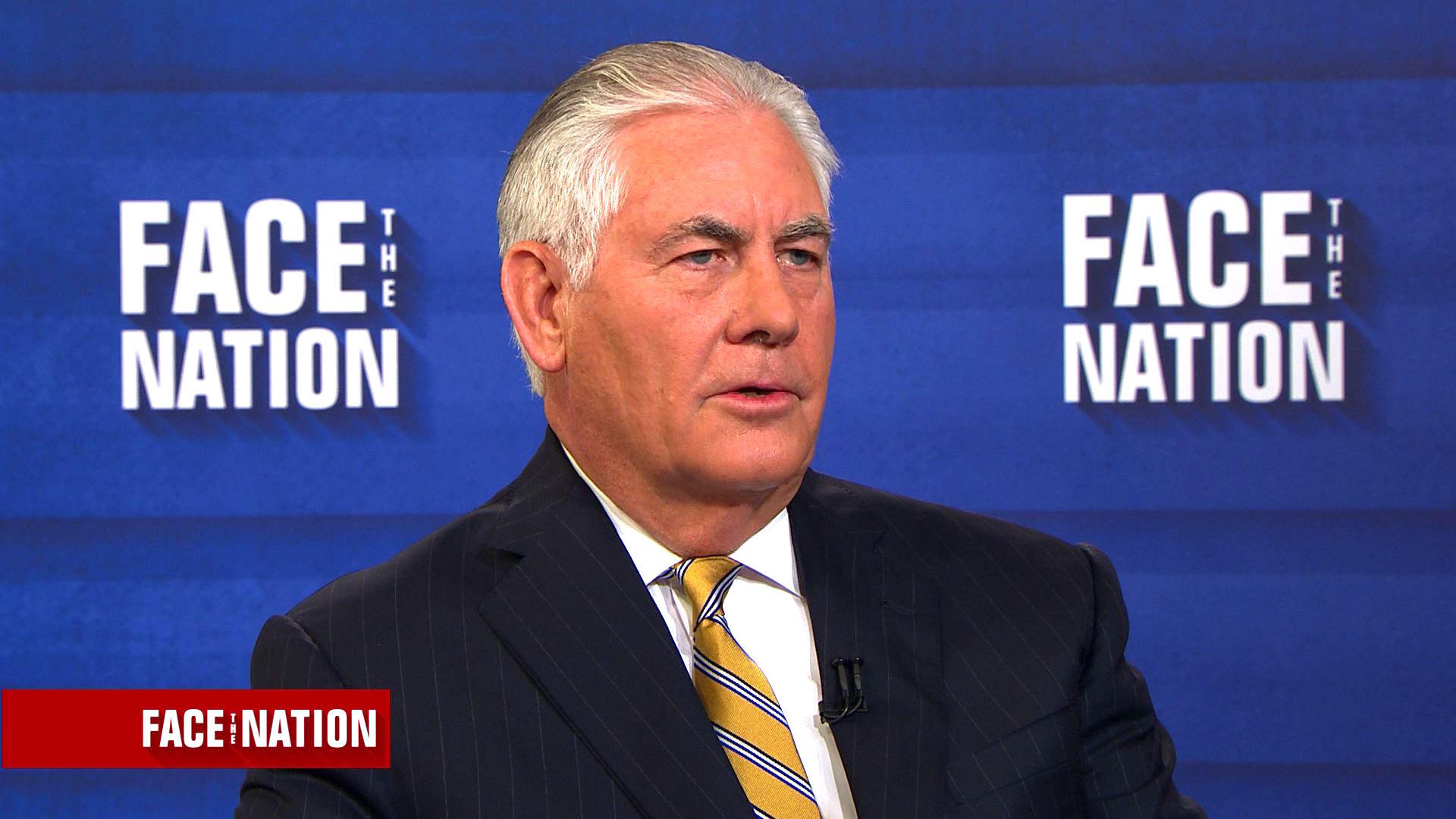 North Korea test-fired another missile over Japan last week just days after the U.N. Security Council approved new sanctions against the rogue state, which remains a top concern for the Trump administration.

U.S. Secretary of State Rex Tillerson joined "Face the Nation" Sunday. He discussed the latest developments on North Korea, as well as the Trump administration's position on the Paris climate accord -- and more.

What follows is a transcript of the interview with Tillerson, which aired Sunday, Sept. 17, 2017, on "Face the Nation."

JOHN DICKERSON: Mr. Secretary, welcome. Let me start with the Paris Climate Accord. The Wall Street Journal reported that the administration was looking for a way to stay in it. But in June President Trump said it was time to exit. So what is the administration position?

REX TILLERSON: Well, the position's being led and developed by Gary Cohn over at the National Economic Council. And I think if you recall the president also said, "Look, we are willing to work with partners in the Paris Climate Accord if we can construct a set of terms that we believe is fair and balanced for the American people and recognizes our economy, our economy--our economic interest relative to others."

REX TILLERSON: In particular, the second largest economy in the world, China. If you look at those targets in terms of the Paris Climate Accord, they were just really out of balance for the two largest economies. So I think the plan is for Director Cohn to consider other ways in which we can work with partners in the Paris Climate Accord. We want to be productive. We want to be helpful. The U.S. actually has a tremendous track record on reducing our own greenhouse gas emissions.

REX TILLERSON: I think under the right conditions. The president said he's open to finding those conditions where we can remain engaged with others on what we all agree is still a challenging issue.

JOHN DICKERSON: All right. Let's move on to North Korea. This week the UN increased sanctions against North Korea. But then North Korea fired another missile. So what's next?

REX TILLERSON: Well, first, I think it's important to understand the policy of the United States, John, towards North Korea is to deny North Korea possession of a nuclear weapon and the ability to deliver that weapon. Our strategy has been to undertake this peaceful pressure campaign we call it enabled by the four no's.The four no's being that we do not seek regime change, we do not seek a regime collapse, we do not seek an accelerated reunification of the peninsula, and we do not seek a reason to send our forces north of the demilitarized zone. So the peaceful pressure campaign is built around enabling--putting together the largest and strongest international coalition we can to send the same message to North Korea and to North Korea's neighbors, China and Russia, that this is the policy of the rest of the world.

And you've seen that expressed now in two unanimous security council resolutions to impose the strictest sanctions ever. All of that designed to bring North Korea to the table for constructive, productive dialogue. If our diplomatic efforts fail though, our military option will be the only one left. So all of this is backed up by a very strong and resolute military option. But to be clear, we seek a peaceful solution to this.

REX TILLERSON: No. It's also a message to assure China that that is also the U.S. policy as well. Because as you well know, China has concerns about a regime collapse in particular and the impact it might have along their border. So this is also to assure the government of China that that is not our agenda either. In an effort to bring them as part of our effort, and they have joined us in these most recent sanctions votes at the UN, we believe China and Russia as well can bring a lot of pressure to bear on North Korea.

REX TILLERSON: Well, there are two particular economic revenue streams to the North Koreans that are quite important to their ability to fund their weapons programs and to maintain their economic activity just within their own country. One, of course, is energy. No economy can function if it does not have access to energy.

REX TILLERSON: China is the principal supplier of oil to North Korea. They have cut off all supplies in the past when things got bad. We're asking China to use that leverage they have with North Korea to influence them. And in the case of Russia it's foreign laborers. Russia has over 30,000 foreign laborers from North Korea. Those wages all go back to the regime in North Korea.

JOHN DICKERSON: China says if they cut off the oil it will lead to that collapse that they worry about. Is there anything the U.S. can do to allay their fears?

REX TILLERSON: Well we--what we've said to them is, "Look, you have the best information. You have your hand on the valve. You set the valve where you think it's going to create the message that you want to send to this regime that they must change the path they're on." So we're put--leaving it in China's hands at this point

JOHN DICKERSON:  And, and why not just start talks now? China, Russia, France have all said the U.S. should solve this with talks at the diplomatic table?

REX TILLERSON: Well, I'm waiting for the regime of North Korea to give us some indication that they're prepared to have constructive, productive talks. We have tried a couple of times to signal to them that we're ready when they're ready. And they have responded with more missile launches and a nuclear test. All they need to do to let us know they're ready to talk is to just stop these tests, stop these provocative actions, and let's lower the threat level and the rhetoric.

JOHN DICKERSON: Do they need to stop them, you know, give them or two weeks, or something? Or do they need to say, "We are going to stop"? Does it have to be a verbal promise?

REX TILLERSON: Well, I've said in the past, John, that we'll know it when we see it in terms of their seriousness.

JOHN DICKERSON: If China doesn't, in terms of seriousness, if China doesn't do what you think is necessary either on this oil question or anything else, are trade measures in order to punish China, to put pressure on China?

REX TILLERSON: Well, the president has been very clear that he views this threat of North Korea as ever growing. And as we've watched each missile test and each nuclear test, their program is advancing. It's advancing technologically, and it's advancing in its capabilities. We've said from the beginning we don't have a lot of time left. We don't have a runway left to land this plane on. So we need China's assistance to bring them to the table.

And the message he's going to deliver in that speech is first he's going to promote and advocate for the strength of democratic values. And he's going to reinforce that it is those shared values that bind our alliances together and that have kept the world a stable place.

They're under attack by others who would undermine our democratic values. So he is going to be very clear in terms of his view that that is what brings us together. That's what binds these nations together, makes us the most powerful, and also creates a stable world.

And then he's going to address these specific threats. So North Korea, Iran, terrorism, global terrorism, and why it is important that all of us come together and confront these as a unified body. I think he does believe the United Nations can be a very important instrument of addressing these threats to the world. But I think he also takes the view that the United Nations has fallen short. And he wants to motivate them in that regard.

REX TILLERSON: Well, my view on the nuclear deal is they are in technical compliance of the nuclear arrangement. But if you go back and read the preamble to the JCPOA, the nuclear agreement, there clearly was an expectation between the parties, the negotiators from the Western parties as well as Iran, that by dealing with this nuclear threat we would lower the tension between Iran and the rest of the world and we would create conditions for Iran to rejoin the community of nations as a productive country that wants stability, and wants peace, and wants prosperity in the region.

That's why all these sanctions were lifted. But since the nuclear deal has been concluded what we have witnessed is Iran has stepped up its destabilizing activities in Yemen. It's stepped up its destabilizing activities in Syria. It exports arms to Hezbollah and other terrorist groups. And it continues to conduct a very active ballistic missile program. None of that, I would believe, is consistent with that preamble commitment that was made by everyone.

JOHN DICKERSON: Very quickly though, they're not a nuclear power. You're dealing with North Korea. Why not do one thing at a time? Why take on, potentially, take on Iran on that question? Why not leave that for another day? You've got a pretty serious thing with North Korea right in front of you.

REX TILLERSON: Well, I think it's important when you consider the Iranian relationship and how we view it, as I have said to others in Europe, consider our full breadth of our relationship. And this is what the president has said as well. Look, we have a lot of issues with Iran. They're a yard long. The nuclear issue is only one foot of that yard. We have two feet of other issues that we must deal with. And it has to do with Iran's destabilizing activities.

JOHN DICKERSON: Very quickly on Cuba. Some senators suggested closing down the embassy there. Should that happen?

REX TILLERSON: We have it under evaluation. It's a very serious issue with respect to the harm that certain individuals have suffered. We've brought some of those people home. It's under review.

JOHN DICKERSON: All right. Mr. Secretary, thank you so much for your time.

JOHN DICKERSON: And we'll be back in one minute with Arizona Senator John McCain.