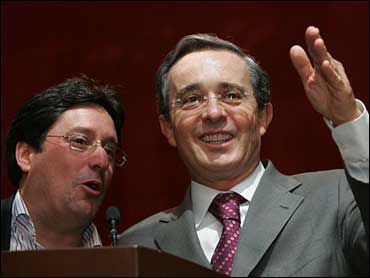 This column was written by Liliana Segura.


When George W. Bush embarked on his five-country tour of a left-leaning Latin America in early March, he no doubt looked forward to visiting his one remaining ally in the region: the man he calls "mi amigo," right-wing Colombian President Álvaro Uribe. But a recent series of explosive revelations of Colombian government collusion with paramilitary thugs ought to put a damper on the occasion.

The first came November 9, when Colombia's Supreme Court issued warrants for the arrest of three uribistas in Congress for their alleged ties to the Autodefensas Unidas de Colombia (AUC), Colombia's murderous right-wing paramilitary group. Rivals of the leftist Revolutionary Armed Forces of Colombia (FARC), the paras have grown increasingly powerful over the past decade, dominating the drug trade, even as they have become beneficiaries of the so-called Peace and Justice Law, which last year granted amnesty to some 32,000 paras in exchange for their disarmament.

Then, on February 15, five more senior senators were arrested for paramilitary ties, including Senator Álvaro Araújo, the brother of Uribe's Foreign Minister, María Consuelo, provoking her resignation February 19. A warrant for the capture of their father, Álvaro Araújo Noguera, was issued March 2; meanwhile, former security and intelligence head Jorge Noguera, a campaign chief for Uribe in 2002, was arrested for arranging the assassination of union leaders and academics by paramilitaries.

The unraveling confirms what has long been an open secret: The Colombian government is rife with paramilitary influence. "What we are discovering here is not just a series of meetings between politicians and criminals," Senator Gustavo Petro of the leftist Polo Democrático told Congress November 30. "What we are discovering, before the eyes of all citizens, is the building of a mafioso regime in Colombia."

The Bush Administration has been largely mute about the mounting parapolitica scandal. But with the advent of a Democratic-led Congress and the State Department requesting a new round of funding for Latin America, the upheaval in Colombia may become impossible to ignore. For the first time since the passage of Plan Colombia — the Clinton-era drug-eradication package that under Bush became a $4.7 billion boon for the Colombian military and American corporations outfitting the drug war — Democrats head key committees that under Republican control have funneled U.S. dollars to Bogotá.

Politically, Plan Colombia has benefited from the seamless merging of "war on drugs" rhetoric with that of the "war on terror." "When it comes to Colombia," Democratic Congressman Jim McGovern says, "the Bush Administration says two things: One, we're fighting terrorists, and two, we're protecting our kids from drugs. Facts don't matter. And anyone who disagrees is 'soft on terror.'"

The events of 2006 alone (labeled the "black year" by the Colombian press) make an overwhelming case for rethinking aid to Colombia. A low point came last fall, in a scandal that spoke volumes about what Uribe's U.S.-funded "democratic security" state has wrought. After a spate of attempted — and seemingly coordinated — terrorist attacks in the weeks surrounding Uribe's re-inauguration last summer, the daily El Tiempo broke the story: Of seven bombs discovered by the military, "at least four" were planted by hired hands of the very officers who were later credited with deactivating them. This included a July 31 attack that injured nineteen soldiers and killed a civilian.

At the root of this scandal lies the military's relentless pursuit of positivos (literally, "positives"). Central to Uribe's results-oriented doctrine of "seguridad democrática," positivos are the successful missions — often measured in guerrilla corpses — that yield money and professional advancement for those involved. Recently, positivos have led to some gross displays of military pageantry, like a staged "rescue" operation last summer in which six innocent "kidnappers" were murdered and then dressed as FARC guerrillas. In January Col. Hernán Mejía, one of the most decorated officers, was revealed to have collaborated with the notorious AUC leader "Jorge 40" in staging similar slaughters.

Thus far, Uribe seems strangely immune to the scandals that have riddled his tenure in office. "Many people believe so completely in what Uribe says that all he needs to do is make a public declaration and they'll go back to their routines," Bogotá-based activist Angela Cerón says. But as Uribe's allies become indistinguishable from the paras that dominate Colombia's conflict, his legacy will be inextricable from a military's whose actions last summer seem all too logical — and consistent — in a society governed by a war too profitable to end.
By Liliana Segura
Reprinted with permission from the The Nation