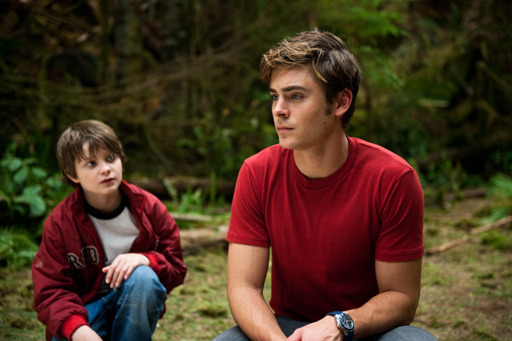 I didn't love "Charlie St. Cloud," for all its predictability and maybe even cheesiness at times.  But as a poor man's specter of "The Sixth Sense," it didn't make me hate it either

There were times during the film when I wanted to cringe at the sheer melodrama of it all.

But despite excess of theatrics, it was interesting to watch Zac Efron tackle his first dramatic leading role.

Based on the bestselling novel by Ben Sherwood, "Charlie St. Cloud," reunites Efron with director Raymond Burr ("17 Again") to play the titular character, Charlie, a star student and sailing protege, on his way to Stanford on a scholarship.

During his last summer at home, he promises his younger brother Sam (Charlie Tahan) that he will teach him how to pitch the perfect baseball game. They promise to meet at sunset everyday to work on technique.

Then tragedy strikes; the boys are hit by a drunk driver on the way to a baseball game. Sam is killed, but Charlie is resuscitated by an EMT worker (Ray Liotta) who believes in the miracles of St. Jude and God and tells Charlie he has been given a second chance at life.

A guilt-ridden Charlie isn't able to shake of his brother's death. He instead sinks into a world of fantasy, where he continues his daily baseball rendezvous and heart-to-heart talks with his dead brother.

There is no real element of mystery about his state of his mind. The audience, never for a moment, is allowed to doubt that Efron's character is out of touch with reality and not, in fact, a ghost whisperer who sees dead people.

He is pulled out of his reverie by the appearance of Tess (Amanda Crew) who is preparing to become the youngest girl to sail around the world solo. Love buds and a tug-of-war ensues. Charlie is torn between hanging on to the guilt over his brother's death and moving on, allowing himself to experience love and become the adventurer he longs to be.

In one painful scene for the audience, his character downs a shot of Jack, while trying to come to grips with his maddening dilemma. Instead of being believable, viewers are left wondering whether he is even old enough to drink.

It was a sore point in a film that otherwise highlighted his strengths as a romantic lead.

Hearts will surely swoon during his intimate scenes with his on-screen love interest and when he perches over the edge of a sailboat, white T-shirt drenched, showing us that his time at the gym was well spent.

Oscar winning Kim Basinger ("L.A. Confidential") makes a fleeting appearance as Charlie and Sam's mother, but you wonder what made her even bother to show up.  Her underutilized talent is just another reason why a moviegoer may leave the theater feeling dissatisfied.

As an actor, Efron still has some growing to do. Watching him on screen, one can't help but think that in a few years time, this former "High School Musical" star will probably succeed as a serious adult actor. He has the on-screen charisma and good looks to pull it off.  Just not now.

With a newly launched production company called Ninja's Runnin' Wild Productions, Efron is beginning to take matters into his own hands, producing and creating the kinds of films that will help shape him into the strong, adult actor he wants to be.

Upcoming projects, which include a workplace comedy, a spy thriller and an edgy drama, will hopefully serve the young 22-year-old well in his transition. "Charlie St. Cloud" serves as a small first step in that direction.