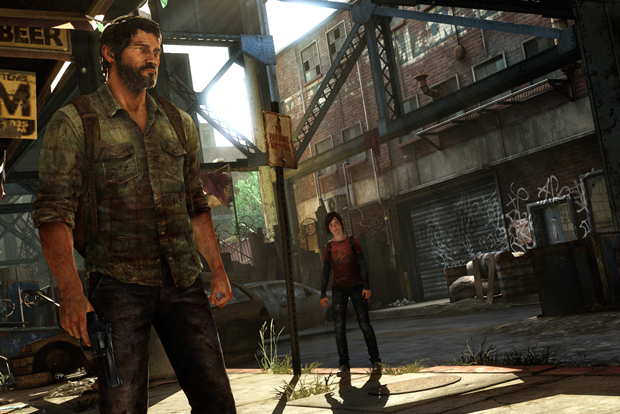 Developer Naughty Dog has generated a well-earned reputation for being one of the most critically acclaimed studios thanks to its stellar Uncharted series. But as genre-defining as that trilogy has become, the studio's latest title -- "The Last of Us" -- has superseded all of Naughty Dog's previous efforts, making this post-apocalyptic tale one of this console generation's defining experiences.

Set in a world ravaged by a pandemic that is slowly morphing humanity into mindless, soulless creatures, "The Last of Us" strives to weave a narrative of desperation, sacrifice and survival -- and does so with rousing success. You play as Joel, a survivor of the outbreak who has experienced unthinkable atrocities that have left him ruthless. He accepts a paid mission to escort Ellie, a precocious 14-year-old girl, across the U.S. Along the way, the pair's relationship morphs from a sterile business-only rapport into a more of a father-daughter bond.

The connection between the two is conveyed by startling voice acting and immersive cutscenes but also Naughty Dog's implementation of dialogue between Joel and Ellie during regular gameplay. These sequences reveal their diverging perspectives of the world's state of decay. Joel knew the world before it was consumed by this fungal virus. Ellie was born into this apocalypse and knows nothing else but the tattered and torn remnants of what used to be. This dichotomy is at the core of the narrative and provides a compelling look at this crumbling world.

At the heart of this chaos is a mysterious, highly contagious infection, which has left human beings in various states of insanity. The three stages you will most commonly encounter are Runners, Stalkers, Clickers. Runners and Stalkers are freshly infected humans who still have human qualities but are becoming driven by the outbreak. Their painful groans reveal the painful state they're in as the infection is coursing through their veins. They can see and hear you but are gradually losing those senses.

Clickers are the third stage. The infection has overtaken their minds and visibly sprouted through their skulls, causing them to lose their ability to see. To compensate, the Clickers emit a haunting clicking sound that they use like sonar. If they get a hold of you, it's game over so moving slowly and silently is a must.

But the adversaries aren't just the infected. Other humans will attack in hopes of stealing dwindling supplies. The human foes present will flank and use whatever advantage they have, a polar opposite to the infected. It's this level of variety that keeps the gameplay fresh and frenetic, something that most games fail to capture.

The combat is also extremely tense. With resources at a premium, each bullet you fire has extra value. There is a crafting system that allows you to create anything from a health pack to a Molotov cocktail. Scavenging the environment is critical to survival, providing you with ingredients that allow you to concoct some deadly compounds. There are also upgrades to some of Joel's abilities, but those are only granted after finding pill bottles that are scarce. Weapons do become available as you progress through the story, but they are a double-edge sword. They are highly effective but also draw a ton of attention.

"The Last of Us" does sport a multiplayer component that does carry over some of the single-player elements. There are two modes: survivor and supply raid. Survivor is similar to team deathmatch, but you will only have one life per round. It's similar to the tension of the single player with a heavy emphasis on cautious play. Once you eliminate all the players on the opposing team, your faction wins that round. The first team to four wins the match in this best-of-seven series. The goal in supply raid is to supply and protect your clan that is made up of four humans and increasing numbers of non-playable characters. Your team has a 20-cap spawn limit, but once you exhaust those spawns the game is over.

You can customize your character with an impressive amount of clothing and upgradable abilities. The customization feels very similar to Uncharted's multiplayer suite. Naughty Dog deserves praise for adding its own touch to multiplayer and keeping with the fiction it has created. It will be interesting to see if the multiplayer will have legs beyond the initial months after release.

But there is no denying that the campaign of will be remembered for years to come. With this console generation slowly giving way to the next, "The Last of Us" is easily one of the most ambitious and engaging titles in gaming. Naughty Dog continues to push narrative in video games to places few have ventured. From the wholly believable voice acting and jaw-dropping cutscenes to the decaying world that has been crafted with great care, "The Last of Us" is breathtaking to experience. "The Last of Us" will hit shelves June 14 exclusively for the PlayStation 3 and is rated "M" for mature.