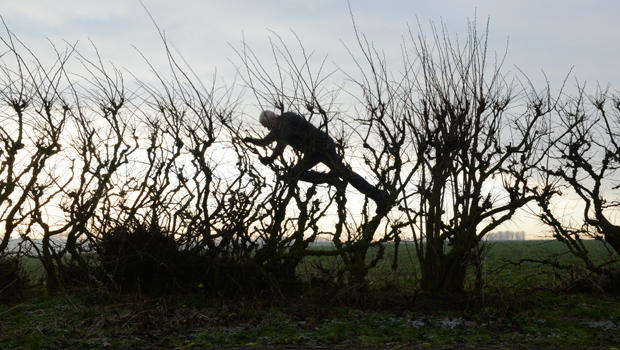 His preferred artist's materials are alive, or were -- felled trees, grass shoots, colorful leaves. Or, it's the raw stuff of Nature -- rock, water, the earth itself.

Andy Goldsworthy's landscape creations are testaments both to the implacable forces of nature and the impermanence of man and his art. For about 40 years the British-born artist has sculpted designs into the earth, chiseled passageways and living spaces into rock, bent branches to create sculptures, and adorned the wilderness with blazing color.

In 2001 director Thomas Riedelsheimer captured the often-ephemeral nature of Goldsworthy's work in the documentary "Rivers and Tides." Now he catches up again with the artist -- a bit grayer now -- as he continues making his mark on the world, even if that mark might easily be swept aside by wind, rain or gravity.

In the evocative new documentary "Leaning Into the Wind - Andy Goldsworthy" (opening in select cities Friday), the sculptor and photographer explains his creed: one can walk along a well-trod, well-delineated path, or one can scramble through the bushes at the side of the road.

An extended sequence in the film is of Goldsworthy turning an oak tree that collapsed across a stream into a canvas; it becomes the foundation for other natural building materials as a counterpoint to the never-ceasing flow of water. We see the fallen trunk through the seasons, an ever-changing experiment.

We also see the physical effort that Goldsworthy exerts (sometimes in the company of his daughter and assistant, Holly, or with workers armed with power tools), so it's ironic that, once the artist has left, the resulting works can appear so gentle and muted in the landscape.  A New Hampshire installation that appears like a walkway carved through rock into the ground, though stark, is so unassuming you'd almost think it had evolved there naturally.

We also see some of Goldsworthy's more permanent constructions -- installations in St. Louis and San Francisco that are commentaries on nature within man-made sites.

The film is beautifully photographed -- you almost rub your nose in the artwork -- but there is an ironic tangent to the narrative (if it can be called that) which runs counter to what one expects of a documentary about artistic expression. While paintings or sculptures might seem to be an artist's bid for immortality, that certainly can't be what drives Goldsworthy, given that much of what he creates is temporary. He might, for example, lay down on a street during a light rain, only to get up and leave an outline of a human body on the wet pavement. The drizzle soon fills in the dry space he once occupied.

That playfulness -- laughing at time -- is probably what accounts for Goldsworthy's strange hybrid of art. Imagine an intricately-carved sculpture crossed with a dancer whose artistry exists in the moment and evaporates into memory; time doesn't really know what to do with such a thing, except perhaps laugh at its brazenness. We in the audience would react the same way.

To watch a trailer for "Leaning Into the Wind" click on the video player below.