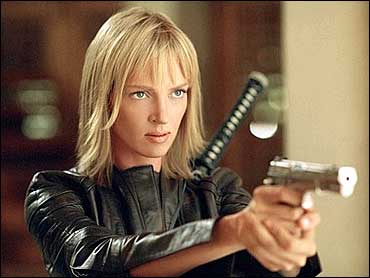 But that was only half of the story. This Friday, Thurman is back in theaters to finish things off in "Kill Bill, Vol. 2."

In the first film, Thurman plays the bride who was left for dead at the altar by her old mentor and assassin partners. Driven by revenge, the bride makes it her mission to kill those who killed her groom and, she thinks, her unborn baby.

"I come back. It's the circle of violence," Thurman tells The Early Show co-anchor Harry Smith. In the sequel, the showdown between the bride and the evil Bill finally takes place. But who will be left standing is unclear.

Both of Quentin Tarantino's films are based on American westerns, Kung Fu movies, and Chinese and Japanese sword movies, notes Smith.

About the director she says, "I think what's so exciting about him, many things, but one of the particular extraordinary things is his work. What I think is the most fun about him, as an audience watching his movies, is his material is so undigested. It's not washed down. It's raw and invigorating and alive. It's exhilarated. It's coming out of him with complete adrenaline."

Some Facts About Uma Thurman