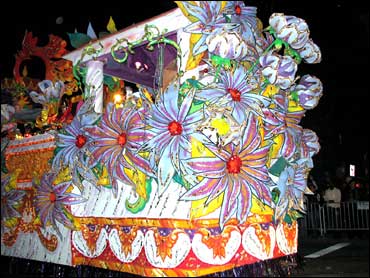 
As the hours wound down to Mardi Gras, spectators lined up four or five thick to watch the most decadent parade since Hurricane Katrina. The Krewe of Orpheus, founded by bayou native Harry Connick Jr., pulled out all the annual stops to awe revelers: flaming torches, boldface-named riders, masked horsemen and massive fiber optic-lit floats.

But no amount of pomp could fool seasoned revelers. Mardi Gras 2006 only resembles past carnivals on the surface. At its core, it is a diminished, more solemn version of past Mardi Gras carnivals.

"This year's Mardi Gras can't compare to what I've seen here five, 10 or 20 years ago," Billy Carroll, a gardener from Atlanta who formerly lived in New Orleans, told CBS News.com's Christine Lagorio. "Usually, the parades are almost too rowdy to the point where you're kind of nervous. This year, it's easy to walk around and people are so friendly. It's a changed place."

"This is my first parade. Most of us don't hang out at parades because there's such a great subculture here that we take advantage of instead," Keefe said.

Keefe is one of hundreds of construction workers who "chased the storm" into Louisiana and Mississippi to find repair work in its aftermath. For Keefe, a temporary gig turned into a passion for a place he'd never visited before. Now he's joined a prominent activist and Lower Ninth Ward rebuilding group, Common Ground, and is planning on sticking around.

Isn't living it up during Mardi Gras a necessary function of being a New Orleanian?

"I really don't get the beads. I mean, I have 30 pounds of beads. You see a gazillion on the street," Keefe said.

Nearly six months after Katrina flooded most of the city and scattered more than two-thirds of its population, all eyes are on New Orleans as it puts on the best show it can muster.

"I'm happy it's going on at all, though this is definitely more peaceful than I'm used to," said annual Mardi Gras visitor Troy Hotard of Baton Rouge.

"Show me something!" Hotard screamed to the crowd on Bourbon Street, trying to spice up the lackluster crowd moments later.

He got no takers.

A few blocks off Bourbon in a French Quarter park, while others were begging for beads on the parade routes, a dozen teens and twenty-somethings jammed on drums and string instruments. A volunteer-run organization gave out granola bars and soup. The square was dark and quiet, but allowed strangers to be social — sharing a more welcome pastime than pounding back hurricanes.

Helen Thompson, a 22-year-old repeat volunteer with the national Assemblies of God church group Answering the Cries, said "This year, more people at Mardi Gras just want to hang out and talk. It's definitely not as hectic as past years."

The locals are nowhere to be seen, Thompson said — even the homeless people she'd encountered at past carnivals weren't showing up this year.

"It seems most of the locals are just trying to make a living back here, nothing else," Thompson said.

Back at the parade route, Carroll offered up his explanation for the different feel.

"Some of the spirit of the celebration and this city is African-American and Creole, and we're missing a lot of that now. Some people just disappeared," Carroll said.

Just then, a voice boomed from the lead float's loudspeaker: "Laura Bush, everyone!"

"It's hard to forget that just a couple miles away there is complete destruction where the city was so teeming with life," Carroll said. "How is it going to come back?"

But a bit of normalcy — Mardi Gras normalcy, that is — popped up on music-club haven Frenchman Street early Tuesday morning. Crowds of young clubgoers met dozens of police on the street in what turned into a screaming match, onlookers said. At least three people were arrested after screaming at officers and climbing on moving vehicles.

At the parade route earlier, three sorority sisters from the University of Southern Mississippi were trying to avoid being penned into the median while a police motorcade rode through, opening the parade of Orpheus before the premier floats carrying Steven Seagal, Al Roker and other stars rolled by, spewing beads at the crowds.

"It's great that this many people are here, even though it's not as many as we're used to seeing," said 21-year-old Latoya Veal.

"You can see signs of Katrina everywhere, and everyone's looking for it," Tsega Alemu, 22, piped in. "But I'm so glad it's going on at all."