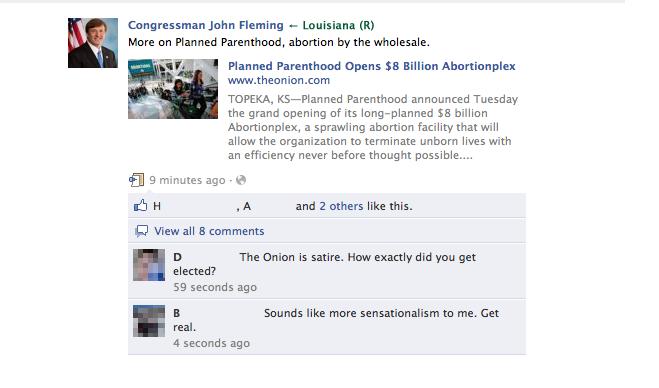 Louisiana Republican Rep. John Fleming is the latest victim of the satirical newspaper "The Onion," posting a fake article to his Facebook page only to realize belatedly that the article was a joke.

"Although we've traditionally dedicated 97 percent of our resources to other important services such as contraception distribution, cancer screening, and STD testing, this new complex allows us to devote our full attention to what has always been our true passion: abortion," the piece (jokingly) quotes her as saying.

The article also quotes a fake 19-year-old girl lauding the facility's "many attractions."

"I was kind of on the fence in the beginning," says the made-up person, Marcy Kolrath, in the article. "But after a couple of margaritas and a ride down the lazy river they've got circling the place, I got caught up in the vibe. By the time it was over, I almost wished I could've aborted twins and gotten to stay a little longer."

The website "Literally Unbelievable," which documents instances of people taking Onion stories seriously, posted a screengrab of Fleming's post. According to the website, Fleming included the caption: "More on Planned Parenthood, abortion by the wholesale," with the months-old link.

"The article was posted inadvertently and taken down within minutes," Fleming spokesman Doug Sachtleben told Hotsheet in an email.

On Feb. 3, Fleming decried Planned Parenthood for its part in a flap with the Susan G. Komen for the Cure foundation, a breast cancer charity, targeting the "so-called pro-choice movement" for allegedly taking aim at Komen "With shrillness and threats."