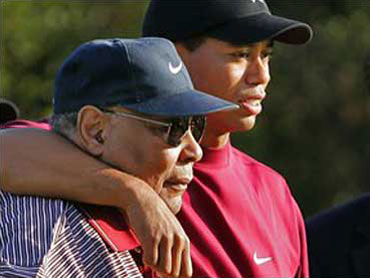 He says he's taking an indefinite break from golf to focus in part on being a better husband, but People magazine says his wife, Elin Nordegren, has already decided she doesn't want him.

"She plans to leave Tiger," the magazine quotes one source as saying. Another source told People, "She's made up her mind. There's nothing to think about; he's never going to change."

"It's just an endless stream of mistresses coming out at this point and everyone is really siding with his wife," observed Jennifer Garcia, a People assistant editor.

Woods and Nordegren have been married five years and have a 2-year-old daughter, Sam, and a 10-month-old son, Charlie.

And now, a new allegation: that Woods' father, Earl Woods, was also an unfaithful husband.

Dina Parr, Tiger's high school sweetheart, told the New York Post, "He would just call crying and say, 'My dad is with another woman' So, yeah, it's interesting that's it's turning out that he's doing the same thing."

And, notes CBS News Correspondent Jeff Glor, three weeks after the bizarre car accident that triggered the unraveling of Tiger's life, he still hasn't shown his face in public, and every day, the price for a post-crash paparazzi picture of the isolated golfer rises.

"Everybody does want to see him, and that's gonna be a big picture when it surfaces, and then they'll be something else that happens that will become bigger," TMZ Executive Producer Harvey Levin told CBS News.

Tiger's celebrity friends say he's even walled himself off to them -- TNT basketball analyst and former basketball great Charles Barkley among them. "I think," Barkley says, "when you have these fires in your life as I call them you need to talk to somebody else who is famous who have been through things in their life."

One bit of good news for Woods, though -- Dubai developers now say they will complete their massive project, called Tiger Woods Dubai, a 55 million square foot community that includes a gold academy, hotel and, of course, a course designed by Tiger.