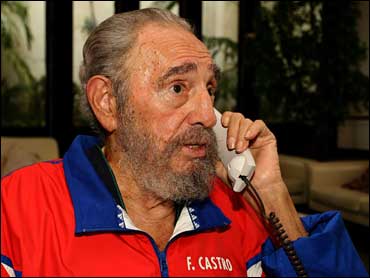 No one was available Sunday at either the Gregorio Maranon hospital or the Cuban embassy to comment on the report.

Castro, 80, has not appeared in public since undergoing emergency intestinal surgery in July. Since then here has been little information from Cuba regarding his condition. Castro has placed his younger brother, Raul, in charge of government.

"Castro's condition is clearly serious, and within Cuba, it is clear that the transition to Raul Castro has already taken place, although no major changes will occur until after Castro is no longer able to exert influence," said CBS News foreign affairs analyst Pamela Falk, "but in recent days Raul Castro has begun to make his first statements about national policy in a clear effort to make a change in leadership more acceptable to the Cuban people."

Although aware of Castro's condition, Sabrido was to examine him in person before deciding whether the Cuban leader should undergo more surgery, El Periodico said.

The paper said the doctor had operated on several important personalities in the past but it gave no names.

It added that Garcia Sabrido had recently addressed a surgery congress in Cuba.