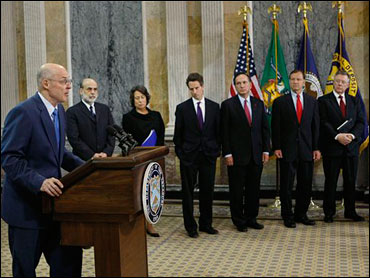 The credibility of the government's $700 billion financial rescue program was damaged by claims a year ago that all of the initial banks receiving support were healthy, a new report contends.

Special Inspector General Neil Barofsky generally found that the government had acted properly in October 2008 as it scrambled to implement the Troubled Asset Relief Program to avert the collapse of the U.S. financial system.

But the report said that then-Treasury Secretary Henry Paulson and other officials were wrong to contend at an Oct. 14 press conference that all nine institutions receiving the first round of support - $125 billion - were sound.

"These are healthy institutions, and they have taken this step for the good of the economy," Paulson had declared at the time.

Barofsky said that the fact that Citigroup Inc. and Bank of America Corp. soon required billions in additional assistance highlighted the inaccuracy of that claim and raised questions about the whole effort. In addition, Merrill Lynch, which was also in the original nine, was in the process of being acquired by Bank of America because of its weakening financial position.

"Statements that are less than careful or forthright - like those made in this case - may ultimately undermine the public's understanding and support," the report said. "This loss of public support could damage the government's credibility and have long-term unintended consequences that actually hamper the government's ability to respond to crises."

In announcing the $125 billion in support to the nine institutions, Paulson had said that by building up the capital reserves of these healthy institutions, it would allow them to resume normal lending to businesses and consumers and help stabilize the financial system.

The nine institutions, including JPMorgan Chase & Co. and Wells Fargo & Co., held about 75 percent of the assets of the U.S. banking system at the time.

A joint statement from Treasury, the Federal Reserve and the Federal Deposit Insurance Corp. also referred to the nine institutions as healthy.

In commenting on Barofsky's report, the Federal Reserve generally supported the findings, saying "transparency and effective communications are important to restoring and maintaining public confidence, especially during a financial crisis."

But Assistant Treasury Secretary Herbert Allison Jr., who now heads the bailout program for the government, said that any critique of the announcements made a year ago should take into consideration the unprecedented circumstances facing financial regulators at the time.

"We believe the most important lesson from this history is that quick, forceful action prevented a catastrophic meltdown of the system," Allison wrote in his response to Barofsky's findings.

Barofsky serves as the auditor for the Troubled Asset Relief Program, a position that was created by Congress when it passed the $700 billion bailout fund on Oct. 3, 2008.

In his new report, Barofsky reviewed Paulson's decision to switch the focus of the program from buying up toxic assets from banks to spur new lending to direct injections of capital. The report cited developments that supported Paulson's contention that financial conditions were deteriorating so quickly that the government did not have the time needed to get the toxic asset program up and running.

The new report also provided information on interviews conducted with embattled Bank of America CEO Kenneth Lewis and Paulson and Federal Reserve Chairman Ben Bernanke over their conversations regarding Bank of America's acquisition of Merrill Lynch.

A congressional committee has investigated whether the government pressured Lewis, who announced this past week that he would leave Bank of America at year's end, to continue with the merger despite sharply rising losses at Merrill Lynch and to delay revealing those losses.

The report said that it had "found nothing to indicate Treasury and Federal Reserve officials instructed Bank of America executives to withhold the public disclosure of losses," the report said.