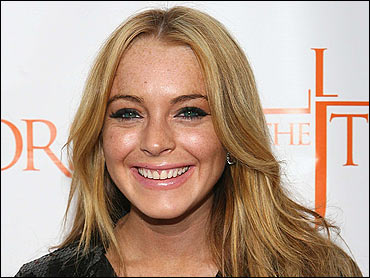 Shots taken from a video of Lindsay Lohan allegedly using cocaine were printed in Britain's News Of The World newspaper on Monday.

The newspaper reports that the "Georgia Rule" star took part in a "marathon cocaine binge" in a bathroom at a Hollywood club 20 days after her stint in rehab. A friend of Lohan tells the newspaper they released the video because she fears things will end tragically for the starlet.

"That's why I'm showing this video," she added. "So the world can know what Lindsay has been doing and she can't lie about it to herself or anyone else."

In the video, the actress allegedly brags about her sexual conquests in Hollywood. Lohan reportedly says, "I'm going to New York tomorrow to f*** Jude Law."

Lohan's pal told the newspaper that the 20-year-old — who left rehab in February — is spiraling out of control and said that the starlet has snorted 20 lines of cocaine in one night.

"Lindsay does not care who sees her do coke and where she does it," a friend told the newspaper, adding that she's been drinking as well. "She carries round a water bottle to try to fool everyone into thinking she is clean but she tips the water out and refills it with vodka and soda."

The friend told the newspaper that Lohan said the trip to Wonderland rehab facility was all for the sake of publicity.

"I remember looking at her and thinking how pathetic she looked and how out of control she had become," the friend tells the News Of The World. "When she is on coke, which is most of the time, all the attention has to be on her … I have lost count of the number of times I have watched as she stripped naked in front of everyone. Then she loves to check herself out in the mirror as she parades around with her boobs hanging out."

The insider tells the newspaper that Lohan has boasted about sleeping with other men in Hollywood, including James Blunt, Calum Best, Joaquin Phoenix, Benicio Del Toro, Jared Leto and James Franco.