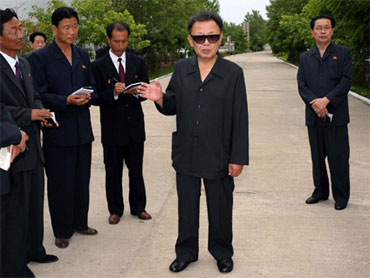 The 67-year-old Kim was diagnosed with the cancer around the time he was felled by the stroke last summer, Seoul's YTN television reported, citing unidentified intelligence officials in South Korea and China.

The report cited the officials saying the disease is "threatening" Kim's life.

Pancreatic cancer is usually only discovered in its final stage, and considering Kim's age, he is expected to live no more than five years, the report said.

The American Cancer Society lists rather less optimistic data; it says about 20 percent of people live at least one year after they discover they have pancreatic cancer but that fewer than 5 percent survive as long as five years.

Kim's health is a focus of intense media speculation due to concerns about instability in the North and a possible power struggle if he were to die without naming a successor. His third and youngest son, Kim Jong Un, has widely been reported as being groomed as heir, but the regime has made no announcement to the outside world.

North Korea's closed nature and its state-controlled media make it all but impossible to verify reports about Kim's health and his successor.

Monday's report came after Kim last week made a rare public appearance at an annual memorial for his late father and North Korea's founder, Kim Il Sung. It was only the second state event he has attended since the reported stroke.

Television footage showed him markedly thinner and with less hair. He also limped slightly, and the sides of his tightly pursed lips looked imbalanced in what were believed to be the effects of a stroke.

The images touched off speculation that he could have other health problems.

Medical doctor and professor Min Yang-ki of Seoul's Hallym University Medical Center has said diabetes usually leads to weight loss. The neurologist also said Kim's limping appears to be a result of a stroke. However, he said, overall it appeared Kim has recovered from that reported illness.

Kim walked on his own into a Pyongyang auditorium for last week's memorial at a normal pace and bowed while standing during a moment of silence.

Yang Moo-jin, a professor at Seoul's University of North Korean Studies, said he doubts the YTN report about pancreatic cancer because the number of Kim's "field-guidance" trips to workplaces has increased significantly this year.

"Would he be able to carry out such brisk activity while having pancreatic cancer?" Yang said.

Seoul's Unification Ministry, which closely monitors the North, said late last month that Kim made 77 trips to factories and farms across the nation through late June, compared with 49 visits made during the same period last year.

Kim Jong Il took over North Korea after his father died in 1994 of heart failure at age 82, though he did not take on his father's title of president. He runs the North from his post as chairman of the National Defense Commission.

In early April, he presided over a parliamentary meeting where he was re-elected as leader.

The agency also reported that Kim Jong Il is expected to officially designate the son as his successor in 2012, the centennial anniversary of late national founder Kim Il Sung's birth, the paper said.

But the regime under the son is expected to be unstable and vulnerable to internal political strife as Kim Jong Il's brother-in-law, Jang Song Thaek, could attempt to snatch power, the paper said.

A U.S.-based scholar who recently traveled to Pyongyang said Saturday that he thinks the son's official designation is expected to come "relatively soon."

"In the past, talking about succession is almost taboo," University of Georgia political scientist Han S. Park told The Associated Press. "But on this trip, I was able to discuss this with officials and acquaintances."