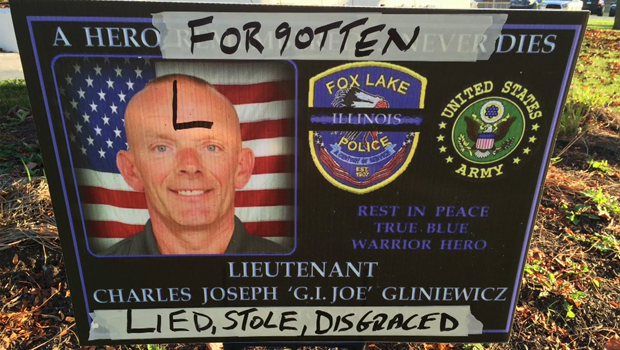 FOX LAKE, Ill. -- CBS Chicago reports investigators believe two other people were involved in the criminal activity of a popular Fox Lake, Illinois police lieutenant who, authorities say, committed suicide in September but tried to make it look like he was murdered.

The officer's relatives have asked for time and privacy. A statement issued through their lawyers said Wednesday had "been another day of deep sorrow for the Gliniewicz family."

Meanwhile, public works employees were pulling down the blue ribbons residents had tied to trees and poles as a tribute to their slain hero. Signs around the small town that had praised the cop known as "G.I. Joe" suddenly disappeared, replaced in one case by another that labeled him "G.I. Joke."

Gliniewicz 's friends and neighbors reacted with disbelief and dismay to authorities' announcement Wednesday he only meticulously staged his own suicide to make it look like he died in the line of duty, but had been stealing for years from a police club for youth he oversaw.

"It's breaking my heart," said Mark Weihofen, a 41-year-old school bus mechanic. "There is a 'We love you, Joe' sign that I pass by every day. ... It was already down."

Investigators said they believed the 30-year police veteran - whose death prompted a weeks-long manhunt and whose funeral drew thousands of mourners - killed himself because his criminal activity was about to be exposed.

"Gliniewicz committed the ultimate betrayal," Filenko said. "We completely believed from Day One that this was a homicide."

The revelations stunned people in Fox Lake, a village of 10,000 about 50 miles north of Chicago where the father of four had long been a role model.

"I haven't got my thoughts together yet. It's shocking," said Fox Lake Mayor Donny Schmit, a friend of Gliniewicz's who said the officer wanted to meet the day before his death to ensure that the Police Explorer program would continue after what he said was his planned retirement at month's end.

"You never thought he was this kind of man," said Kathy Pederson, a single mother who considered him a father figure for her son in the Explorers program.

Now, she said, "People are outraged and they are taking down the posters. ... They want their money back."

The reaction to Gliniewicz's deception extended beyond Fox Lake.

A Washington, D.C.-based organization responsible for collecting the names of officers killed in the line of duty -- the Law Enforcement Officers Memorial Fund -- quickly removed Gliniewicz's name and photo from its website and said his name would no longer be etched onto a marble monument dedicated to fallen officers. After his death, pundits had called Gliniewicz a victim of an increasingly dangerous environment for police as some citizens challenge what they see as overzealous enforcement.

An organization that assists survivors of officers killed in the line of duty, the 100 Club of Chicago, asked the Gliniewicz family to return a $15,000 donation. And Motorola Solutions, which announced in September it would put up a $50,000 reward toward information leading to the arrest of Gliniewicz's killer, said the money will be donated to the Explorer program to replace stolen funds, the Chicago Tribune reported.

Still, 24-year-old Ashley Scott said there are a number of people in Fox Lake who don't believe the officer killed himself.

"I say he died of police corruption - either his corruption or somebody else's," she said.

Investigators said Gliniewicz's death was carefully staged. Minutes before he died, he radioed he was chasing three suspicious men into a swampy area. Backup officers found the Army veteran's body about 50 yards from his squad car.

The first bullet from his handgun had struck his cellphone and ballistic vest. The second pierced his upper chest, under the vest. The swampy terrain was otherwise undisturbed, Filenko said.

By then, an intense and costly manhunt had begun, with hundreds of officers searching houses, cabins and even boats on area lakes. Helicopters with heat-sensing scanners and K-9 units scoured the area for days. More than 100 investigators stayed on the case for weeks.

When questions arose about the investigation in September, Gliniewicz's family dismissed the suggestion of suicide. He "never once" thought of taking his own life and was excited about his retirement plans, his son D.J. Gliniewicz insisted.

Gliniewicz deleted the messages, but investigators recovered them, and released some of them verbatim on Wednesday, without identifying whom he sent them to.

On Aug. 31, the day before Gliniewicz's death, Marrin said she asked him for an inventory of the Explorers program.

In one of the texts, Gliniewicz discussed trying to get Marrin out of office, perhaps by arresting her for drunken driving, but also mentioning "planting things" and a remote bog in the area.