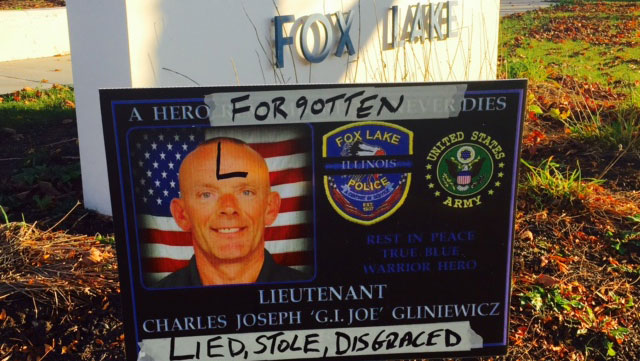 FOX LAKE, Ill. -- When an Illinois police officer was shot to death in September, swarms of cops joined a dragnet to find the three men he said he was chasing.

The cop was hailed as a hero cut down in the line of duty -- until now. Investigators said Wednesday it was all a lie. The officer, an instructor who created fictional crime scenes, had done it one last time.

After a two-month, $300,000 inquiry involving 150 investigators, it came down to this: Fox Lake Police Lt. Joe Gliniewicz was a crooked cop who killed himself but tried to make it look like a murder.

"Gliniewicz committed the ultimate betrayal to the citizens that he served and the entire law enforcement community,"George Filenko, who commands the Lake County Major Crimes Task Force, announced Wednesday.

Investigators say for seven years, Gliniewicz stole tens of thousands of dollars from a youth program he oversaw. The Explorers Program for prospective policemen was turned into his personal piggy bank for first class travel, mortgage payments and subscriptions to pornographic websites.

"He behaved for years in a manner completely contrary to the image he portrayed," Filenko said.

That image was of a straight-arrow, "G.I. Joe" kind of cop, so popular with the public thousands turned out for his funeral.

On September 1, investigators say Gliniewicz drove on patrol to a secluded area and radioed that he was following three men. Minutes later, a back-up unit found his lifeless body with two bullet wounds.

But as investigators looked deeper into his death, through 6,500 pages of his texts and 40,000 e-mails, they found evidence pointing in a troubling direction. One text threatened that the body of a local administrator looking into Gliniewicz's finances might wind up in a swamp.

The shooting scene also raised doubts, with things like his pepper spray and eyeglasses scattered on the ground to suggest a struggle.

But the coroner found that Gliniewicz had shot himself -- once in his bulletproof vest and once under it -- with his own semi-automatic handgun which he threw into the weeds before he bled to death in what investigators called a carefully staged suicide.

"Those acts reflected on the entire police community," Filenko said. "We took a black eye."

A day before his death, Gliniewicz was told his program was being audited. Officials told CBS News he tried to make his suicide look like a murder because he hoped to be remembered as a hero -- and not as a thief.