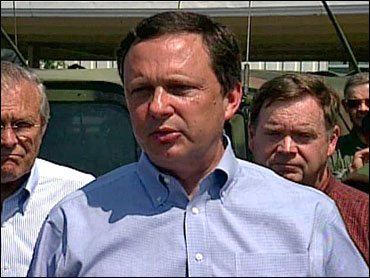 Michael Brown, head of the Federal Emergency Management Agency that has been heavily criticized for what many charge was a slow response to the decimation caused by Hurricane Katrina, now faces accusations that his resume is padded.

Much of the criticism of the response to the hurricane has been aimed at Brown, whose qualifications for the job have been questioned. Some even have called for him to be fired.

That bio and a White House news release says Brown worked for the city of Edmund, Okla., overseeing its Emergency Services Division.

But Carolina Miranda, a reporter for Time, tells The Early Show co-anchor Rene Syler that doesn't appear to have been the case.

"His bio, the White House press release, and a number of sources list him as assistant city manager in Edmund, Okla.," Miranda says. " When we called the folks in Edmund, they told us that, no, his position in fact had been assistant to the city manager, which is a purely administrative job, a very different job. He was an administrative assistant. It's sort of an entry-level, intern-type job for somebody who's interested in learning about government. …When he began that job in 1977, he was still a college student. He didn't graduate with his B.A. until 1978."

Miranda says she isn't sure who is responsible for that type of error.

"That, we'll have to wait to see and find out," Miranda says. "But the fact is, it's an error that's been repeated a number of times, on his FEMA bio, the White House press release. It's the kind of thing you'd think somebody would have caught it by now but, clearly, nobody has."

Miranda says there are discrepancies in another profile as well.

"FindLaw is a legal Web site where attorneys can post information about themselves," she says. "It said he was a professor at Central State University in political science. We called Central State (now known as the University of Central Oklahoma, in Edmund). They said he had never been a professor there, that he had been a student. … But his FindLaw bio says he had been an outstanding professor in political science."

FEMA has issued a statement challenging Time's findings. It reads in part, "Time's misleading online report on Undersecretary Mike Brown's background is based on online information Mr. Brown has never seen. The Web site used as a primary source by the magazine states clearly: 'We try to provide quality information but we make no claims, promises, or guarantees about the accuracy.' ... It's disappointing this magazine relied on unconfirmed information."

Miranda counters that the statement refers to FindLaw, about which she had reservations.