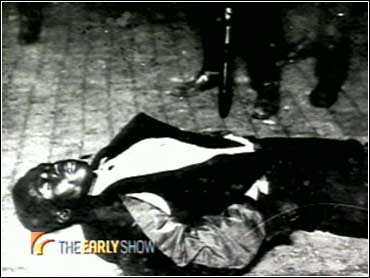 In 1921, a violent clash between black and white residents of Tulsa, Oklahoma left the city's prosperous black community in fiery ruins.

Although 40 people were confirmed dead at the time, oral history puts the death count as high as 300, including many whites.

On Monday, the commission assigned to gather facts on the riot will recommend to the Oklahoma State Legislature that survivors or their descendants be paid reparations.

Ross says the riot "was the worst civil disturbance since the Civil War."

"I probably talked to 300 or 400 survivors in Tulsa. I heard Willhemina Howell talk about her uncle surrendering to a deputy, walking out of his house with his hands up and being killed. I heard my Sunday school teacher talk about her nephew being pulled down the center of Greenwood behind a pick-up. I realized there was a massive cover-up by the press and the government."

"Coming out of the civil rights movement, I wasn't afraid of anything," says Ross.

What triggered the riot? A young black man got into an elevator with a white woman on May 30, 1921. No one knows for sure what exactly happened on that elevator, but one theory is that the man brushed against her, causing her to scream.

The man was arrested for rape but later released when the woman refused to press charges.

The local newspaper ran a story on the incident with the headline, "To Lynch Negro Tonight."

It drew a group of white people, ready for action. Conflict arose when the black community showed up to protect the accused man. Gunfire erupted.

Survivor Kinney Booker recalled how his mother and siblings hid while his father faced armed whites at the door.

Booker's sister thought the world was on fire.

By the time it was all over, the black area of town known as Greenwood was almost completely burnt to the ground. Many blacks left and never returned.

Rep. Ross initiated interest in studying the riot, but he declined to serve on the commission because he felt he was too biased.

Republican State Senator Robert Milacek is a member of the commission and he voted against reparations to survivors and their families, although he was outvoted.

"Actually, I feel that the state of Oklahoma acted very honorably with their use of the National Guard dispatched as quickly as possible, considering the circumstances in 1921, and basically brought the riot to a halt before more bloodshed could take place," said Sen. Milacek.

"I agree that there were serious injustices done," Milacek sas, and therefore he supports scholarships to descendants and residents of the area.

"And I also support erecting a memorial of some sort, but I can't support monetary reparations," he says, because "where does it stop?"

"Do you go back further in history and find every instance where somebody lost property or their life through one of these situations?"

Rep. Ross feels that "If people have been harmed, they have a right to bring that complaint against the government."

"The conspiracy of silence has been broken," he says. "I'm proud that my state and city were able to look into their horrific past and talk honestly about it."