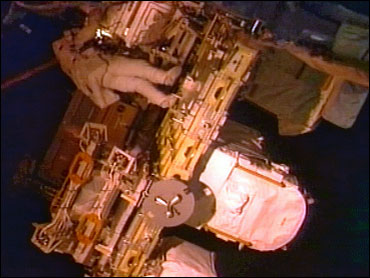 The crew of the space shuttle Discovery is now attempting to do something that's never been done before: sending a spacewalker beneath the craft to repair filler sticking out from the ship's thermal tile belly.

NASA says the protruding material on the shuttle could cause dangerous overheating during re-entry and lead to another Columbia-type disaster.

Armed with forceps and a makeshift hacksaw, a Discovery astronaut floated from the ship's airlock just after 4 a.m. EDT Wednesday for an unprecedented spacewalk to eliminate a potential source of dangerous overheating during the shuttle's re-entry.

Discovery will remain docked at the space station until Saturday. The shuttle is set return to Earth early Monday.

CBS News Correspondent Mark Strassmann reports the repair being attempted Wednesday is considered to be fairly straightforward, and it is one the astronauts have trained for, although they have never actually tried in space.

CBS News tech analyst Larry Magid speaks with astronaut Buzz Aldrin about the Discovery mission.
The Discovery astronauts got a call Tuesday from President Bush, who thanked them for being "risk takers for the sake of exploration."

The president wished the crew "Godspeed for your mission."

"Thanks for being such great examples of courage for a lot of our fellow citizens," Mr. Bush said.

Using a special foot restraint, Robinson is to ride space station's 58-foot robotic arm as fellow astronauts aboard the station maneuver it so he can reach the shuttle's belly.

Nobody's ever worked under the shuttle before and if you're not really careful you could hit the bottom and do some damage. But CBS News Correspondent Peter King reports Robinson seems to be most concerned about something we all worry about during home improvements - hitting his head.

Robinson is taking only essential tools for the repair - leaving anything else he may need, including a tile repair kit, just outside the airlock. He'll also make sure to secure his safety tethers between his legs and behind him to prevent accidentally striking the vehicle.

Once under Discovery's belly, Robinson expected to spend about an hour removing or trimming the fillers from two locations near the shuttle's nose.

NASA officials think Robinson should be able to easily pull the first gap filler - about the thickness of three index cards bonded together - by using his gloved hand.

If a gentle tug doesn't work, he'll pull a little harder with forceps. And if he remains unsuccessful, Robinson will resort to a hacksaw put together in orbit with a deliberately bent blade, plastic ties, Velcro and the handyman's favorite all-purpose fix-it: duct tape.

"Because of the way this gap filler is sticking up at both ends, it does not appear to be bonded," NASA officials told the crew in uplinked materials. "We expect it to slip out easily."

Once work is completed at the first location, astronauts planned to reposition the station's arm so Robinson could reach the second protruding piece of filler, which sticks out about an inch.

That piece could be trickier, as NASA officials believe it remains glued to a shim that is bonded to a thermal tile.