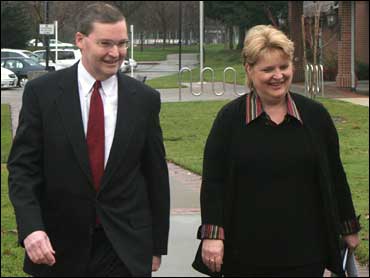 Republican Rep. John Doolittle of California, who is under investigation in a congressional lobbying scandal, said Thursday that he'll retire from Congress at the end of his current term.

"My wife, Julie, and I have made this decision after much prayer and deliberation. It was not my initial intent to retire, and I fully expected and planned to run again right up until very recently," Doolittle said after addressing supporters in his Northern California district.

"But it distilled upon us that we were ready for a change after spending almost our entire married lives with me in public service. We are at peace with this choice and look forward to starting a new chapter in our lives."

The development comes as Doolittle, in his ninth term, faced growing political pressure from fellow Republicans who considered him a liability because of his involvement, along with his wife, in the Jack Abramoff influence-peddling investigation. House Republicans, still smarting from losing control of Congress in 2006, are eager to put that ethics taint behind them and welcomed Doolittle's announcement.

"John's decision was made in the best interests of his family, his constituents and the House, and I appreciate his years of service in Congress," Minority Leader John Boehner, R-Ohio, said in a statement. "My prayers remain with John and Julie, and I wish them the best as they work to bring this difficult process to a resolution."

Doolittle came close to losing re-election in 2006 in one of the most conservative districts in California, and some in his own party believed he couldn't survive this time around.

He has denied wrongdoing in his ties to Abramoff, the disgraced former lobbyist whom he considered a close friend. But after the FBI raided the congressman's Virginia home in April looking for information about event-planning work that Doolittle's wife did for Abramoff, the congressman was forced to step down from the powerful Appropriations Committee.

A flurry of grand jury subpoenas to the congressman and his aides followed. Party leaders pointedly declined to encourage Doolittle's re-election plans and his fundraising lagged.

Doolittle is contesting subpoenas for his congressional records as part of a larger dispute between Congress and the Justice Department over the scope of criminal investigations of lawmakers. That made it unlikely that his legal situation would be resolved before November's election.

For months, Doolittle resisted suggestions that he retire, branding his GOP critics "weasels." But he faced mounting legal bills and at least two declared Republican primary opponents, with others waiting in the wings. Meanwhile, the Democrat he barely beat in 2006, Charlie Brown, collected 10 times as much money as the incumbent for a rematch.

Doolittle will be the latest in a string of House Republicans to announce their retirements, although most don't have his legal problems. Nearly 20 others are headed into voluntary retirement.

He has a number of ties to Abramoff, including interceding on behalf of the lobbyist's tribal clients. He received tens of thousands of dollars in campaign money from Abramoff and his clients, and unlike other lawmakers he never got rid of it.

Abramoff's firm employed Julie Doolittle for event planning work from 2002 to 2004, paying her a total of $66,690. Doolittle has said prosecutors seem focused on whether his wife did real work to earn the money. The fundraiser she was hired to plan ended up getting canceled after the invasion of Iraq in March 2003.

The Abramoff investigation already has led to a dozen convictions, including a guilty plea from now imprisoned former Rep. Bob Ney of Ohio.