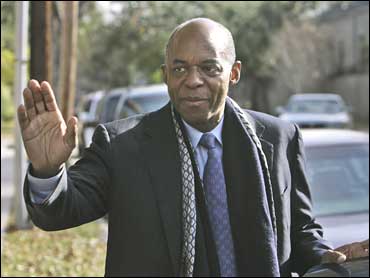 Rep. William Jefferson, D-La., was indicted Monday on federal charges of racketeering, money-laundering and soliciting more than $400,000 in bribes in connection with years of trying to broker business deals in Africa.

The indictment in federal court in Alexandria, Va., lists 16 alleged violations of federal law with prison terms totaling as much as 235 years. Jefferson is charged with racketeering, soliciting bribes, wire fraud, money-laundering, obstruction of justice and conspiracy.

He is the first sitting congressman to face charges under the Foreign Corrupt Practices Act, which prohibits corporate bribery overseas.

The scheme was complicated, and Jefferson set up a front company to hide the money, prosecutors said.

"But the essence of the charges are really very simple: Mr. Jefferson corruptly traded on his good office and on the Congress," said Chuck Rosenberg, the U.S. attorney for eastern Virginia.

In August 2005, investigators raided Jefferson's home in Washington and found $90,000 in cash stuffed in a box in his freezer.

The 63-year-old Jefferson, whose Louisiana district includes New Orleans, has said little about the case publicly but has maintained his innocence. He was re-elected last year despite the investigation.

Joseph Persichini, who leads FBI's Washington field office, called on the public to "take the time, read this charging document line by line, scheme by scheme, count by count. This case is about greed, power and arrogance."

Jefferson, in New Orleans on Monday, could not immediately be reached for comment. His lawyer was planning an afternoon news conference.

Two of Jefferson's associates have already struck plea bargains with prosecutors and have been sentenced.

Brett Pfeffer, a former congressional aide, admitted soliciting bribes on Jefferson's behalf and was sentenced to eight years in prison. Another Jefferson associate, Louisville, Ky., telecommunications executive Vernon Jackson, pleaded guilty to paying between $400,000 and $1 million in bribes to Jefferson in exchange for his assistance securing business deals in Nigeria and other African nations. Jackson has been sentenced to more than seven years in prison.

Both Pfeffer and Jackson agreed to cooperate in the case against Jefferson.

The impact of the case has stretched across continents and even roiled presidential politics in Nigeria. According to court records, Jefferson told associates he needed cash to pay bribes to the country's vice president, Atiku Abubakar.

Abubakar denied the allegations, which figured prominently in that country's presidential elections in April: He ran for the presidency and finished third.

The indictment does not name Abubakar. But it describes Jefferson's dealings with an unnamed "Nigerian Official A" who was a high-ranking official in Nigeria's executive branch and had a spouse in Potomac, Md. One of Abubakar's wives lived in that Washington suburb.

Court records indicate Jefferson was videotaped taking a $100,000 cash bribe from an FBI informant. Most of that money later turned up in the freezer in Jefferson's home.

In May 2006, the FBI raided Jefferson's congressional office, the first such raid on a congressman's Capitol office. That move sparked a constitutional debate over whether the executive branch stepped over a boundary.

The raid's legality is still being argued on appeal. House leaders objected to the search, saying it was an unconstitutional intrusion on the lawmaking process. The FBI said the raid was necessary because Jefferson and his legal team had failed to respond to requests for documents.

Some but not all the documents seized in the raid have been turned over Justice Department prosecutors.

Among the specific charges listed in the indictment: