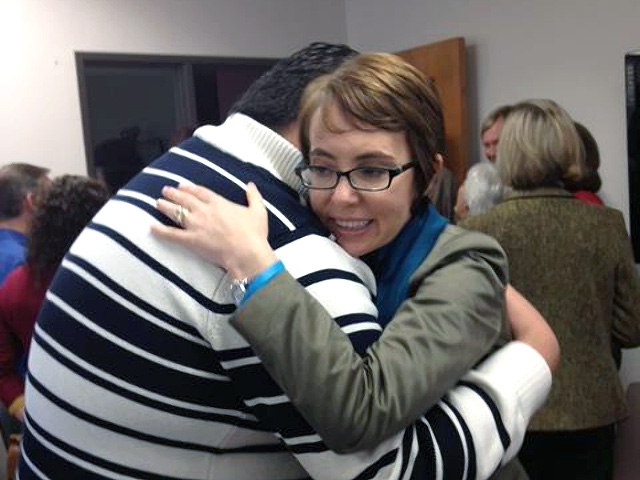 TUCSON - On her last day in Arizona as a Congresswoman, Gabrielle Giffords attended a series of events with staff, community leaders, and those who were with her at the site of the gunman's attack last January where six people were killed.

The three-term Democrat announced yesterday that she is leaving Congress to focus on her recovery.

With a nod to wrapping up unfinished business, Giffords today completed her Jan. 8, 2011 "Congress On Your Corner" event that was tragically ended when an assailant opened fire, killing six people and wounding 13 others, including Giffords.

Among those attending the private event were some of those wounded, as well as citizen heroes who subdued the gunman and aided those injured.

CBS Affiliate KOLD reports that Giffords arrived at her Tucson office Monday morning, where she met with staffers, including Daniel Hernandez, the young intern and certified nursing assistant who is credited with saving her life.

Also meeting with Giffords was Pat Maisch, hailed as a hero for wrestling a gun magazine from the shooter that day.

"It was very touching," said Maisch, who was not hurt in the attack. "I thanked her for her service, wished her well, and she just looked beautiful."

Also Monday the congresswoman was meeting with and thanking community leaders from her district, as well as some of those who have advised her on border security, solar, defense and veterans' issues.

Later, Giffords visited the Gabrielle Giffords Family Assistance Center at the Community Food Bank of Southern Arizona. The center, which opened on September 23, was established after people donated more than $215,000 in Giffords' honor after the shooting.

Giffords' aides had to yell at TV cameramen and reporters who surrounded the Congresswoman as she arrived at the food bank, telling them to back up. Giffords didn't bat an eye, but walked with confidence through the crowd and into the food bank, where she promptly hugged Carnegie and others.

When she saw the center that is named in her honor, she said "Wow" and "Awesome."

Giffords did not address reporters at the center and planned to head to the airport right after her visit. She was expected in Washington on Tuesday for President Barack Obama's State of the Union address.

Later this week, she will submit her letter of resignation to House Speaker John Boehner and Arizona Gov. Jan Brewer.

Giffords is a third-generation Arizonan who served five years in the state legislature before her election to Congress in November 2006.