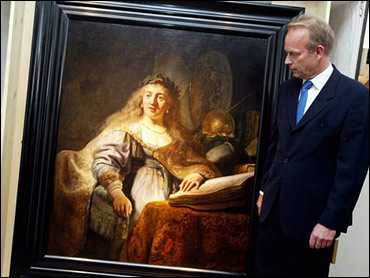 Flanked by gun-toting guards and security cameras, one of the few Rembrandt paintings not in a museum or private collection goes on public display Saturday and on sale with an asking price of $46 million.

The 1635 painting, "Minerva In Her Study," is one of the most significant to be offered in Sweden. Art dealer Verner Aamell told The Associated Press he'll keep the painting by the Dutch master on display in a private gallery in the capital and let the public view it for four weeks.

The opening comes a month after armed thieves broke into a museum in Oslo, Norway, and made off with Edvard Munch's masterpieces "The Scream" and "Madonna."

The brazen daylight theft stirred a debate across Europe on how to protect art if thieves are prepared to use deadly force to take it.

Unlike the guards at the Edvard Munch Museum in Oslo, those watching over the Rembrandt will be armed. Alarms are in place, and video cameras will run in the gallery 24-hours-a-day.

"We have a better possibility of protecting ourselves than (the Munch Museum) does," as the painting will only be on view for a month, Aamell said Friday. "This is an old bank office, with a vault and everything. The risk of theft is very small."

Ulf Goeranzon, a Stockholm Police Department spokesman, said the gallery has not requested help from police.

Aamell is no stranger to art theft. In 2002, five paintings he was displaying at an antique fair outside Stockholm were stolen. One was Jan Brueghel's "View Over Alost," which was valued at $3.2 million. The painting has not been found.

"The art show was in charge of security that time," Aamell said. "It was sloppily handled."

Despite concerns about theft, the Rembrandt, which is insured, may not find a buyer, he said.

"We don't know if we'll be successful, but we hope so," Aamell said.

The record price for a painting by Rembrandt van Rijn was $28.7 million for his 1632 "Portrait of a Lady" in December 2000 at Christie's in London.

Aamell said several foreign art collectors have expressed interest in the painting, but he hopes it will end up in Swedish hands.

"In that case, it will probably end up at the National Museum" in Stockholm, he said. "It's not exactly a painting you hang above your couch."

Aamell tracked the painting down this year and persuaded its Canadian owner, who wants to remain anonymous, to sell it. If no buyer has been found by Oct. 22, the painting may move on to another country, he said, and offered for sale there.

Bob von den Boogert, curator of the Rembrandt House Museum in the Netherlands, said it's rare for a Rembrandt painting to go on sale.

"Anyone who wants to buy one should do it now," he said. "If a Rembrandt painting gets into a museum collection, it will never get out again."

"Minerva In Her Study" depicts the ancient Roman goddess of wisdom and war sitting at a table, illuminated by light. Before her is an open book and one hand marks the spot she is reading. Behind her is a golden helmet, globe, spear and a shield bearing the head of the gorgon Medusa.