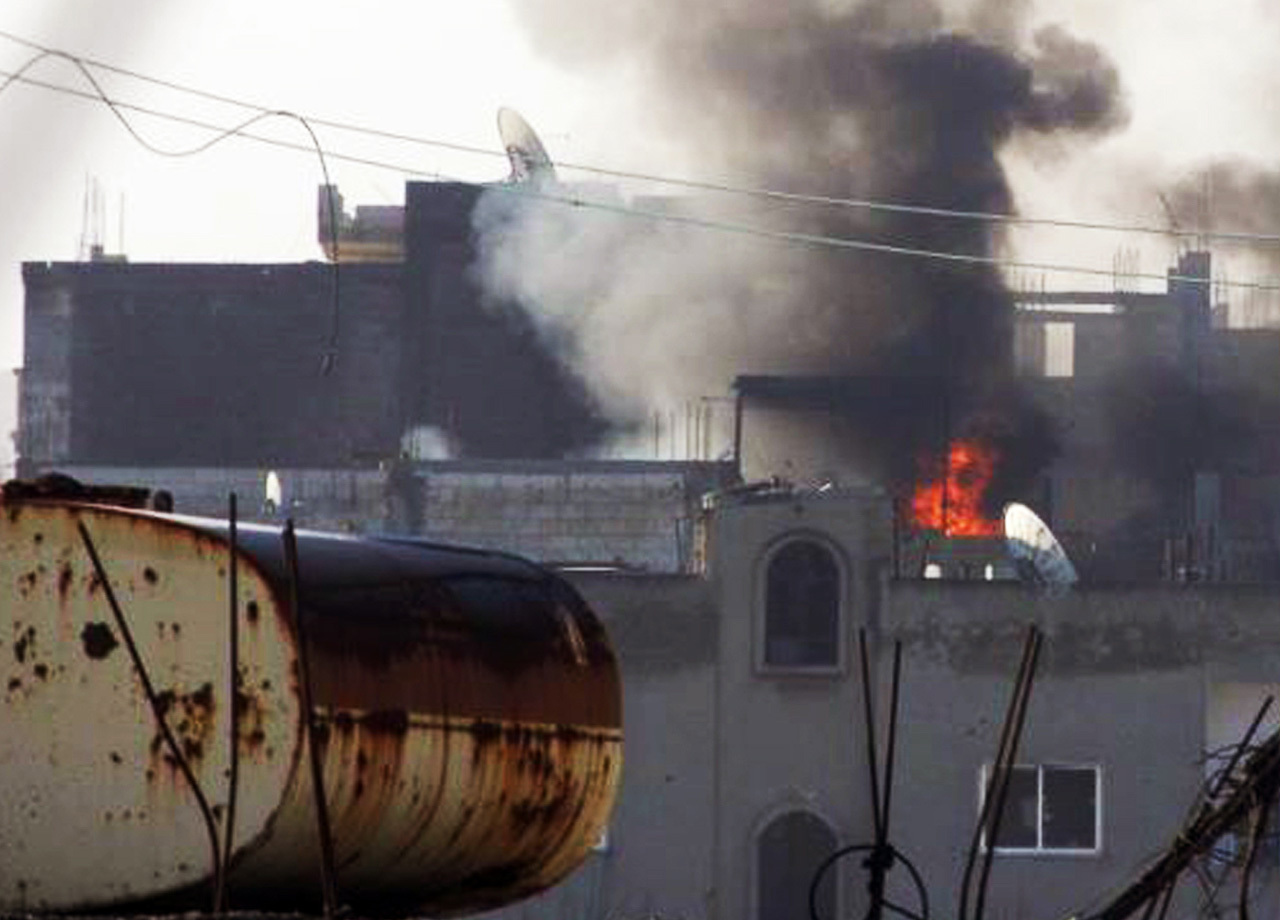 GENEVA - The Red Cross said it has failed to gain access to a besieged neighborhood in the Syrian city of Homs.

The humanitarian group and its Syrian chapter are seeking safe passage to evacuate wounded and sick civilians from Baba Amr, after managing to bring out 27 people Friday.

But a spokesman for the International Committee of the Red Cross in Geneva says negotiations Saturday "yielded no concrete results."

Hicham Hassan told The Associated Press that talks with the Syrian government and opposition forces would continue Sunday.

Hassan says the Syrian Red Crescent was able to carry out evacuations elsewhere in Syria, including in other neighborhoods of Homs.

Activists said at least 68 people were killed across the country, as regime forces pounded rebel-held neighborhoods in Homs.

Also on Saturday Syria lashed out at Saudi Arabia, a day after the kingdom's foreign minister backed the idea of arming the rebels fighting President Bashar Assad's regime, accusing Riyadh of becoming "a partner" in the bloodshed in Syria.

The sharp riposte from Damascus, which was published in a state-run newspaper,

Syria's traditionally cold relations with Saudi Arabia have plunged into a deep freeze since the 11-month-old uprising against Assad began. The Sunni power in the region, Saudi Arabia has been a harshly critical of the Assad regime, which is controlled by the minority Alawite sect, and its brutal crackdown against the mostly Sunni opposition.

The Syrian regime's relentless assault on Homs, which has emerged as the heart of the anti-Assad revolt, entered its fourth week with government shelling killing at least 19 people Saturday. An International Committee of the Red Cross team evacuated 27 people Friday from Homs' besieged neighborhood of Baba Amr but has so far failed to get out two wounded Western journalists and the bodies of two other reporters killed by government rockets.

ICRC spokesman Hicham Hassan said Saturday that the group and Syrian Arab Red Crescent Society have resumed talks with the government and opposition to continue evacuating all persons in need of help in Baba Amr.

"Until last night, seven wounded persons were evacuated from Baba Amr, as well as 20 women and children," he said.

Syria's Foreign Ministry accused gunmen of blocking the evacuation of the wounded journalists. Activists, however, said that French journalist Edith Bouvier of Le Figaro and British photographer Paul Conroy of the Sunday Times refused to leave Baba Amr with the Syrian Red Crescent Society and demanded that they be taken out by the ICRC.

The bodies of an American and a French journalist who were killed by government shelling Wednesday are still in Baba Amr.

The Syrian uprising began in March with mostly peaceful protests in a number of the country's impoverished provinces. As security forces violently suppressed them, killing thousands, the protest grew and escalated into an increasingly armed insurrection.

The U.N. said last month that 5,400 people had been killed in the Syrian revolt in 2011. Hundreds more have died since. Activists put the number at more than 7,300, but overall figures are impossible to confirm independently.

"I think it's an excellent idea," Prince Saud told reporters in Tunisia. Asked why, he replied: "Because they have to defend themselves."

Al Thawra said that the prince, by "rudely" supporting an armed opposition, has become a "direct partner in shedding more Syrian blood."

"It's shameful for the vocabulary of the Saudi speech to reach this level ... and to announce so rudely support for terrorists," Al Thawra said. The paper reflects the Syrian government's point of view.

In August, Saudi King Abdullah issued a harsh statement against Assad's crackdown and recalled the kingdom's ambassador to Damascus in protest. Since then, the ambassador has not returned and Saudi officials have been campaigning against Assad's regime worldwide.

The Syrian regime has accused the opposition of being terrorists acting out a foreign plot.

The Britain-based Syrian Observatory for Human Rights said at least 68 people were killed in shooting, clashes and government troops shelling throughout the country Saturday, the largest group of them in Homs.

Another activist group, the Local Coordination Committees, said 75 people were killed 31 of them in Homs province.

The LCC also said that citizen journalist Anas al-Tarshi, better known as Anas al-Homsi, died Friday during government shelling of the Homs neighborhood of Qarabees. Al-Tarshi, who used to film and upload videos on activist websites was killed while trying to evacuate wounded people from the neighborhood, the LCC said.

In Istanbul, Turkish Foreign Minister Ahmet Davutoglu said Saturday that Syria was seeking to crush its opposition and then proceed with reforms.

"That kind of logic unfortunately renders any kind of reform meaningless," he said. "To fight on the one hand with your people and then to claim that there is reform is contradictory."

He criticized the Syrian government's assault on Homs just before holding a referendum.

Assad has announced a Sunday referendum on a new constitution. The charter would allow a bigger role for political opposition to challenge Assad's Baath Party, which has controlled Syria since a 1963 coup. But leaders of the uprising have dismissed the vote as an attempt at superficial reforms that do nothing to break the regime's hold on power.

Davutoglu spoke at a joint news conference with U.N. General Assembly President Nassir Abdulaziz Al-Nasser, who called for increased pressure on Syria to stop its crackdown. Al-Nasser described the meeting on Syria in Tunis as a "starting point" at which "certain ideas were put on the table.