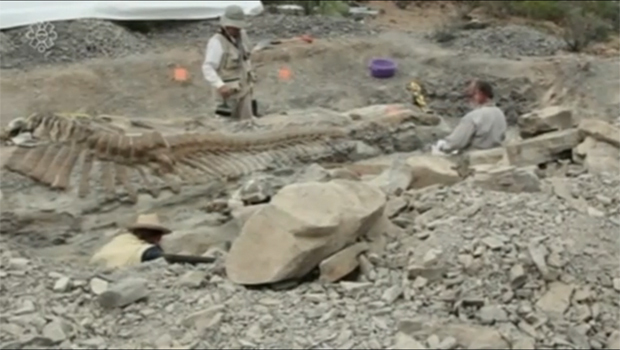 Buried for up to 72 million years, one of the world's largest intact dinosaur tail fossils is now almost fully visible. Archeologists from Mexico's National Institute for Anthropology and History (INAH) and National Autonomous University of Mexico (UNAM) have been brushing away sand and gravel for nearly 20 days, slowly revealing a record 50 connected vertebrae on the 16-foot tail.

First discovered in May 2005 and reported to INAH in June 2012, the fossil is believed to belong to a hadrosaur, or duck-billed dinosaur. The exact species is still being determined.

"For the biological study of dinosaurs this finding is important because we will have a sequence that will reveal the characteristics of the vertebrae. How they will be seen differentiating in size depending on their position in the spine," paleontologist Angel Ramirez Velasco said in a press release.

The dig site is in the small town of General Cepeda, in the northern Mexican state of Coahuila. Now an arid desert rich with fossils, the area was much closer to the coast during the Cretaceous Period.

The excavators also uncovered the dinosaur's hips, and say the rest of its body is likely buried deeper underground.