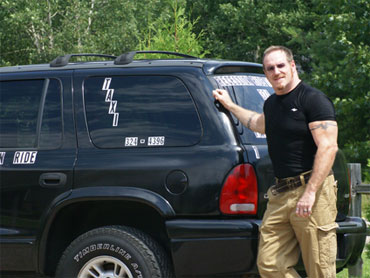 (CBS)
What do you think is the best idea for a new business?

1) Taco ingredient home delivery
2) Flavored ice cubes - for those who want a hint of lemon in their drinks, but don't want to use an actual lemon.
3) A bar on wheels
4) A taxi cab where people don't have to pay if they don't want to.

These ideas are all the brain children of 46-year-old Eric Hagen of Burlington, Vermont. For the last several months he's been trying to come up with a way to supplement his income.

A few weeks ago Eric started the "Recession Ride Taxi Service."
His motto is "Pay What You Want."

I went up to Burlington this week to meet Eric because, believe it or not, he's actually making money. Yes, some people don't pay the going rate. But many others are paying MORE than the going rate. They say they like the idea of being trusted to pay a fare that's fair. Eric's convinced he's stumbled on a new business model. Although when I asked him what other businesses might be able to use "pay what you want" pricing, he struggled, "um…delivery services, ahh, other taxi cabs, umm, couriers, ahh, delivery services…"

Too bad. I was hoping to get a steal on a new car.

To see Eric's full story, please tune in for tonight's Assignment America on the CBS Evening News with Katie Couric.