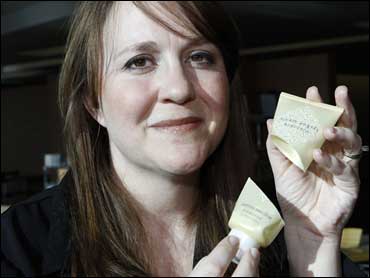 Amy VanDeventer has always been a cheapskate. The recession is taking her to new extremes.

Before the economy tanked, she was still wearing maternity clothes from her last pregnancy, clipping coupons and using hand-me-downs to dress her daughters, ages 2 and 3. Now, she's salvaging bagel scraps left on their plates for pizza toppings and cutting lotion bottles in half so she can scrape out the last drops.

"I was already cheap," said VanDeventer, a 36-year-old mortgage loan underwriter from Broomfield, Colo. "Now I am neurotic about it."

If you thought those cheapskate friends and relatives couldn't pinch pennies any tighter, think again. The recession is making tightwads like VanDeventer cut back even more. They're going way beyond sharpening their coupon scissors, replacing already cheap store-brand fabric softener with vinegar and even making their own detergent. VanDeventer was drying her hair in front of a fan after her portable hair dryer broke - until her friends bought her a new one.

The recession is radically changing behavior among many different types of people, from the Wall Street bankers who are now waltzing into Wal-Mart for the first time to buy their groceries to teens who are now thumbing through the piles of status jeans at secondhand shops to save money. And experts say that such behavior could linger long after the economy recovers.

What surprises frugality bloggers is that many cheapskates such as VanDeventer haven't lost their jobs and are not in danger of losing their homes. Many have stashed a good chunk of cash away. But the economic uncertainty is catapulting them to new levels of thriftiness.

"I do it out of fear because I would rather put that money in the bank or purchase something we really need," said VanDeventer, who now saves about 50 percent of her take-home pay, up from 25 percent before the recession began more than a year ago.

The trend is disturbing for merchants, who are already reeling from the sharp pullback by spenders. Such extreme miserly behavior could only worsen the decline in consumer spending.

"Frugal people are now looking at more ways not to spend money," said Lynnae McCoy, who runs a blog called beingfrugal.net, which attracts seasoned penny pinchers. In January, her site received 110,000 hits, up 30 percent from a year ago. What intrigued McCoy was the interest among frugal folks to save even more money by making their own detergent and other household goods.

Elizabeth Schomburg, a credit counselor from Roscoe, Ill., is now replacing store brand softener with vinegar in her laundry. The 31-year-old, who used to comb the 80 percent off sales racks, said she has stopped doing any "recreational buying."

"I am questioning every single purchase," she said.

She's also not stockpiling discounted groceries because she wants to limit how much money she puts out for each trip to the supermarket. That kind of behavior is showing up in fourth-quarter results at companies including foodmaker H.J. Heinz Co., whose sales suffered as consumers are cleaning out their cupboards before buying new items.

Jeff Yeager, author of The Ultimate Cheapskate's Roadmap to True Riches, sees a silver lining to the economic downturn.

"Whatever you do to simplify your life is a good thing," Yeager said. A self-proclaimed cheapskate, he has spent no more than $100 over the past five years on clothing for himself and won't throw anything out until it literally falls apart.

But he's found ways to cut back even more now, such as eating more lentils - which are cheap and nutritious - and biking more to save gasoline. His mantra for buying food? Buy not what you want, but what's affordable at the time.

Unlike many big spenders during the boom years, he says he and other cheapskates are "sleeping easy" these days.

They're also getting some respect from the spenders, who even just a few months ago mocked their thrifty ways.

"My friends used to laugh at me," said Jodi Furman, referring to her obsession with 70 percent off sales and her knack for saving money with coupons.

They're not laughing now. The mother of three from Lake Worth, Fla., parlayed her knowledge into a blog called neverpayretailagain.net last fall. The blog helps shoppers save money on fashionable clothing and healthy food.

"If you can't make more money, then you can spend less - and that's the equivalent of making more money," Furman said.

While she doesn't scrape pizza crumbs or make her own detergent, Furman said she's "laser-focused" when it comes to saving on groceries. She's saving 60 percent to 70 percent off her grocery bills. On a recent trip to Winn-Dixie, she scooped up $63.50 worth of groceries for $16.45. She picked up a box of TLC Cereal bars, regularly priced at $3.99, for $1 - it was on sale for $3 but she used a $2 coupon. She got a $3.99 package of Equal sweetener for free - combining a coupon with the sale price.

Many people are embracing the new challenge of squeezing the most value out of every last penny. Who knew you could make household products such as detergent? McCoy says it's not hard: mix Borax with a half bar of soap, baking soda and its relative washing soda, which cuts grease and can be found in the laundry areas of many supermarkets.

"If you have vinegar, Dawn soap and baking soda, you can pretty much make any cleaning product," McCoy said.