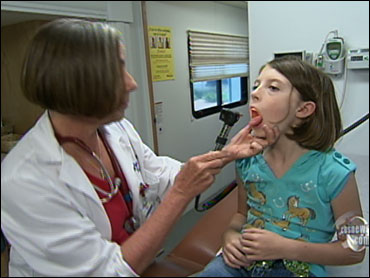 At first blush, you'd think Shaunna Terry does pretty well. She drives a nice car, and has a nice house.

Trouble is, the house isn't hers - Shaunna's a realtor in Austin - desperate to unload any one of several high-end homes in the middle of a market bust, reports CBS News correspondent Kelly Cobiella.

"When a house doesn't sell, you don't get a paycheck?" Cobiella asked.

"Don't get a paycheck," Shaunna said.

With her six-figure annual income a distant memory, health insurance for this single mom and her two daughters has become a luxury they've decided to do without.

"We weren't needing to go to the doctor's, so I was like, 'should we have insurance premiums or should we do food?' So unfortunately, I've decided to kind of let that lapse," Shaunna said.

"So you rolled the dice?" Cobiella asked.

"I rolled the dice," Shaunna said.

"I worry a lot about her and what she's going through," Alyssa said.

"Does she know you worry a lot?" Cobiella asked.

But 9 year-old Alyssa couldn't hide an ear infection last March. Shaunna had no choice but to take a $100 trip to the doctor, plus antibiotics. When it came to the follow-up visit, she balked.

"You wait it out a little bit just to kind of see," Saunna said. "'Do I absolutely need to do this?'"

Within weeks, Alyssa was sick again, this time with aches and a 104-degree fever.

"It started getting worse," Alyssa said.

"Did you feel like you didn't want to go to the doctor?" Cobiella asked.

"No, I wanted to because I knew they would take care of me and get me better," Alyssa said.

"Was there any mom guilt?" Cobiella asked.

"Very big," Shaunna said. "You know, feel like you didn't do what you're supposed to be doing for your children."

That's when the school nurse told Shaunna about the Children's Health Express Van, a pediatrician's office on wheels, with no insurance forms and no fees.

There are 37 more mobile medical clinics like it in 15 states across the country. Originally intended to serve low-income, under-privileged children, the mobile medical units are seeing more parents like Shauna come in every day, who've lost their insurance, lost their job, or both.

"We say to them, 'We'll be your pediatrician until you're in a more stable situation,'" said Dr. Irwin Redlener.

"When we have a situation like this recession, where we have a mounting up of barriers for families, it really increases the chances that children will fall through the cracks," Redlener said.

One safety net is supposed to be the federally funded CHIP program, recently reauthorized by President Obama. But of the estimated 8 million children currently uninsured, CHIP is expected to cover only half. Finding out whether your kids are eligible can be complicated - and time consuming. Dr. Redlener says, kids can't wait.

"For children, a temporary loss of access to health care can have lifelong consequences," Redlener said. "Because, in that absence, we may miss something very critical to a developing child."

And even though her ear infection is all but gone, Alyssa Terry says she still doesn't feel normal.

"When you're sick for so long, when you get back to yourself, you don't feel the same," she said. "You feel like someone different."

"Really? What do you mean by that?" Cobiella asked.

A big change for something that started so small, and another consequence for children of the recession.