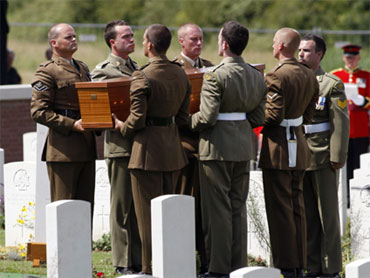 Royalty, governments and relatives on Monday honored Australian and British soldiers whose remains were discovered in mass graves on the 94th anniversary of the World War I battle of Fromelles in northern France.

Prince Charles, top Australian officials and families of some of the soldiers were to attend the ceremony, in which one soldier will be reburied, and which marks the end of more than two years of painstaking exhumation and identification work by archaeologists.

A coffin containing the remains of the last soldier was to be carried from the site of the mass graves in a World War I-era, horse-pulled wagon to a recently built cemetery nearby. Prince Charles will then dedicate the new Fromelles Military Cemetery.

An Australian amateur historian discovered the graves - which contain the largest group of Australian remains from World War I ever found - in a muddy field on the edge of a small wood in 2008, prompting an investigation by the Australian government.

Retired Australian banker Jim Parslow, 71, made the trip from Melbourne to honor his second cousin, William Moore, of the Australian infantry, who died at Fromelles at age 25. Parslow, an amateur genealogy buff, said Moore had been officially identified thanks to DNA provided by an unidentified family member.

"This represents closure for us. Finally, he's been identified and honored as someone who served his country," said Parslow, who added that Moore's brother was also killed in France in WWI. He said that Moore's death had long haunted the family.

"My father passed along all the information he had about him (Moore) before he died and I picked up where he left off," he said.

Riki Samuel, 59, a London-based communications company owner, made the trip to honor his great-uncle Edward Samuel, who died at Fromelles at age 30. Edward Samuel was a Scotsman of Jewish faith who emigrated to Australia a few years before his death. He was known to have fallen at Fromelles, but his body has not been identified.

"This is one of the most important days for the Samuels family," said Riki, who was one of ten of Edward Samuels' relatives attending Monday's ceremony. "We're hoping he'll be identified during a second wave of testing later this year, but you never know. So many of them were blown to bits."

The remains appear to date from a ferocious night of fighting 90 years ago. Late on July 19, 1916, Australian forces launched the battle of Fromelles, the first Australian combat operation on the Western Front.

More than 5,500 Australians were killed, wounded or went missing at Fromelles in under 24 hours, along with more than 1,500 British, cut down by German machine guns and artillery. German troops buried them afterward, Australian investigators say. The site, near a pockmarked battlefield, was covered over time. 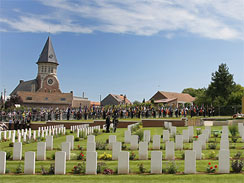 (AP Photo/Michel Spingler)
More than 23,000 Australian soldiers' bodies were never recovered for burial from World War I, according to the Commonwealth War Graves Commission.

Only a single body was to be reburied Monday. The other 249 bodies were buried in the new Fromelles Military Cemetery in early 2010. Only 96 of the remains found have been identified by name, all Australians.

An additional 109 of the bodies were confirmed to have belonged to the Australian army, but not named. Three were confirmed to be British. The other 42 are classified as unknown, the organizers said.
By Associated Press Writer Jenny Barchfield