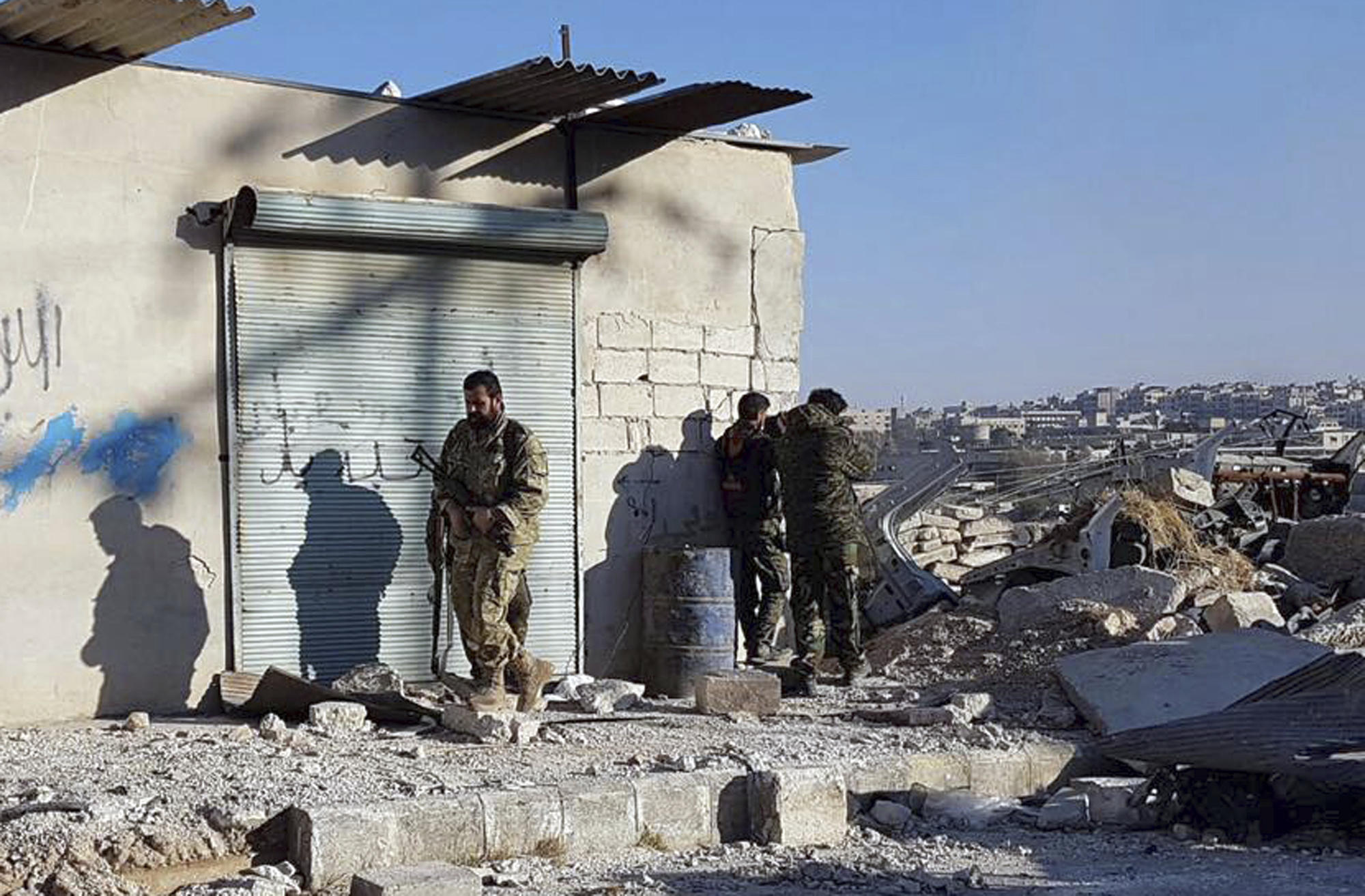 BEIRUT -- Syrian government forces captured more than a third of opposition-held eastern Aleppo on Monday, touching off a wave of panic and flight from the besieged enclave as rebel defenses in the country’s largest city rapidly collapsed.

Reclaiming all of Aleppo, Syria’s former commercial capital, would be the biggest prize of the war for Assad. It would put his forces in control of the country’s four largest cities as well as the coastal region, and cap a year of steady government advances.

Palmer says three months of non-stop shelling and bombing appear to finally have paid off for Syria’s army, its allies and its Russian backers. Troops punched into rebel-held eastern Aleppo over the weekend and by Monday evening, they controlled 40 percent of the territory that had been grabbed by the opposition since 2012.

All day on Monday, civilians streamed steadily out of the battle zone.

Charles Lister, a senior fellow at the Washington-based Middle East Institute, said the opposition’s losses in Aleppo are the biggest in four years.

Ever since it joined the uprising four years ago, eastern Aleppo tried to make itself a model for a Syria without Assad. It elected local leaders, ran its own education system and built an economy trading with the rebel-held countryside and neighboring Turkey.

Its residents kept life going amid ferocious fighting with the pro-government western districts, but four years of battles and airstrikes have reduced entire blocks in the territory to rubble.

Helped by massive Russian air power and thousands of Iranian-backed Shiite militia fighters from Lebanon, Iraq and Iran, Assad renewed his push for Aleppo this month. The besieged eastern districts came under intense airstrikes that killed hundreds in the past two weeks.

More than 250,000 people are believed trapped there with limited access to food, water and medical supplies. They include more than 100,000 children, the U.N. says.

“It is stinging cold, food is scarce and people are shaken in the streets,” Mohammad Zein Khandaqani, a member of the Medical Council in Aleppo, told The Associated Press in a text message from eastern Aleppo.

On Monday, Syrian and Russian soldiers, who for weeks have been attacking their homes, instead offered the refugees bus transport away from danger -- and desperately needed food. Fatima Akil said she hadn’t eaten for three days, unable to find even bread.

Another woman fled with her dead mother in a wheelchair.

“My mother died of hunger,” the woman said. “We’ve had very little to eat or drink for five months.”

Some are taking refuge in mosques while others moved to homes of displaced people in safer areas, he added.

Thousands of civilians, many of whom had refused to leave despite the suffocating siege and bombardment that tested the limits of endurance, fled the enclave over the weekend and Monday.

“We’ve been under siege for the past three months,” said Alaeddine Hilal, a 45-year-old trader who lives between the Hulluk and Haidariyeh neighborhoods, speaking by phone. “I couldn’t find a tomato or potato, or even an egg to eat. There were no nutrients left.”

Among the civilians who have lived under constant bombardment since the government offensive began, are seven-year-old Bana Alabed and her mother Fatimah. The little girl has helped put a human face on the suffering of civilians in eastern Aleppo through the Twitter account managed by her mother.

It was clear from their stream of tweets over the weekend that the government forces were getting nearer, at least from the air.

Early Monday morning, Bana said in a tweet that her family was “under heavy bombardments. In between death and life now.”

By the end of the day, they, too, would be forced to run for their lives.

Pro-government forces began a push last week apparently aimed at slicing the territory in two. Over the weekend, rebel defenses buckled under simultaneous advances by the government and Kurdish-led forces, sending people fleeing inside the divided city.

Troops moved quickly Saturday into the Hanano neighborhood, the first time they had pushed that far into eastern Aleppo since 2012. On Monday, they moved into the Sakhour district, putting much of the northern part of the city’s besieged rebel-held areas under government control.

With the capture of Sakhour, the rebels are now boxed in mostly in central and southeastern Aleppo, encircled by government troops.

Ammar Sakkar, a spokesman for the Fastaqim brigade, said the rebels would continue to fight.

“The situation of the revolutionaries inside the city is good, from a military point of view,” he said. “We’ve redeployed and made fortifications. There will be an attempt to hold fast.”

Still, the collapse in Aleppo is a devastating blow to the morale of rebels in other parts of Syria. With Aleppo secure, Assad will be able to turn his attentions to the Damascus countryside and Idlib, the province next to Aleppo.

The northern province is a stronghold of the al Qaeda-linked Fateh al-Sham Front and other Islamic opposition factions, and the loss of Aleppo is expected to be a defeat for the people holed up there.

It also potentially would free up Assad’s forces to advance on ISIS, including the northeastern city of Raqqa, the extremists’ de facto capital.

U.S. President-elect Donald Trump has said he will ramp up the war on ISIS militants and suggested he would be willing to work with the strongmen who do so. He has made clear that defeating ISIS is more important than removing Assad.

The war that has killed well over a quarter-million has its roots in a harsh government crackdown on dissent in 2011. It remains far from a political resolution.

“Assad’s survival does not promise stability in Syria,” said Lister, who predicts that the collapse of the more moderate rebel elements will embolden the extremists.

“The hunger to remove Assad is as strong as ever,” he said. “Islamists and jihadists are stronger, and that’s where we are headed today.”

Russia’s Defense Ministry said Syrian government forces in recent days captured 12 neighborhoods and over 3,000 buildings. The troops now control 40 percent of the rebel-held parts of Aleppo, and more than 100 rebels have laid down their arms and left the eastern suburbs, it added.

A report from east Aleppo’s Haidariyeh area by a correspondent for Al-Manar TV of Lebanon’s Hezbollah group showed bulldozers removing barriers to open roads as Syrian troops rode in armored personnel carriers. The neighborhood was captured Monday, with Hezbollah fighters taking part along with Syrian troops.

State TV said 3,000 people, half of them children, have fled in a few hours. It showed men, women and children in green buses heading for government-controlled areas.

Hilal, who has four children, said his family is scattered. “I stayed in the liberated area because I couldn’t move,” he said of maintaining his residence in eastern Aleppo. He has not seen one of his sons in two years and is yet to meet his first grandson.

“We’ve aged 200 years in these past two or three years. It was like judgment day. I wouldn’t wish this on my enemies,” he said.