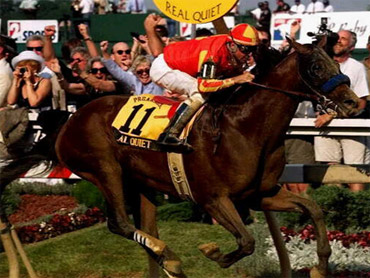 Real Quiet, the slightly built colt who in 1998 won the Kentucky Derby and Preakness and missed the Triple Crown by a nose, has died at 15.

"It's a pretty big blow for us," Jester said.

Jester brought Real Quiet to his Pennsylvania farm in 2005 and said the horse was in great health until his death.

Trained by Hall of Famer Bob Baffert, owned by Mike Pegram and ridden by Kent Desormeaux, Real Quiet narrowly missed the Triple Crown a dozen years ago. He beat Victory Gallop in both the Derby and the Preakness before Victory Gallop edged him at the wire in the Belmont.

"He gave us a lot of thrills and excitement," Baffert told The Associated Press by phone from California. "Just winning the Kentucky Derby for Mike Pegram was pretty amazing."

Baffert spent just $17,000 when he purchased Real Quiet for Pegram at the Keeneland September Yearling sale. When Baffert told Pegram about the buy, Pegram looked at the horse's pedigree and wondered how Baffert was able to swing such a bargain.

Baffert pointed to the horse's narrow front profile. As athletic as Real Quiet looked pacing around the sales ring, there wasn't much to look at when he faced forward. Baffert ended up nicknaming his new horse "the Fish."

"It's a good thing he was already named because that's what we probably would have named him," Baffert said with a laugh. "But he was a beautiful horse, just a beautiful specimen."

And a pretty decent runner, too, though it took Real Quiet awhile to find his bearings. He struggled at shorter distances and ended up needing eight races to break his maiden, finally doing so at Hollywood Park. He went on to win the Hollywood Futurity as a 2-year-old though he remained an afterthought in Baffert's barn.

Baffert figured stablemate Indian Charlie, not Real Quiet, was his best chance to win the Derby. Indian Charlie captured the Santa Anita Derby and went off as the favorite in the Run for the Roses. Baffert, however, wasn't so sure the smart money was in the right place.

"The last work before the Derby was an incredible work," Baffert said. "I knew right then he had a chance to win the Derby."

Real Quiet proved his boss right, surging past Indian Charlie at the top of the stretch then holding off a late bid from Victory Gallop while Indian Charlie faded to third.

Real Quiet was even better in the Preakness, roaring to the front at the turn to pull away from Victory Gallop by 2½ lengths to stoke hope for the sport's first Triple Crown in 20 years.

Baffert, who had just missed a Triple Crown in 1997 with Silver Charm, thought for sure his "tough little horse" had the stuff of which legends were made.

"Going into the Belmont, I felt really confident," Baffert said.

His confidence grew as Real Quiet took command in the stretch, opening a sizable gap. Yet Baffert could see his horse start to relax, almost a little too much, as Victory Gallop closed in.

By the time they hit the wire, it was too close to call. The photo showed Victory Gallop by a nostril. It's an image that sticks with Baffert more than a decade later.

"He just got out there by himself and if he had to do it all over again, he needed to wait on Victory Gallop," Baffert said.

Baffert wouldn't trade the outcome, however.

"I think winning the Kentucky Derby was more important," said Baffert, who teamed with Pegram to win this year's Preakness with Lookin At Lucky. "The Triple Crown is a great honor. I won (the Preakness and Belmont) with Point Given, and it wasn't the same. I'd rather win the first and give the other two up."

Real Quiet won the Hollywood Gold Cup and Pimlico Special at age 4 before being retired to stud. He spent time at Taylor Made Farm in Nicholasville, Ky., before being moved to Pennsylvania.

According to Bloodhorse.com, Real Quiet won or placed in 17 of 20 starts and earned over $3 million.

None of his progeny, however, has been able to duplicate his success.

"I've been looking for another one like him," Baffert said. "They're hard to find."