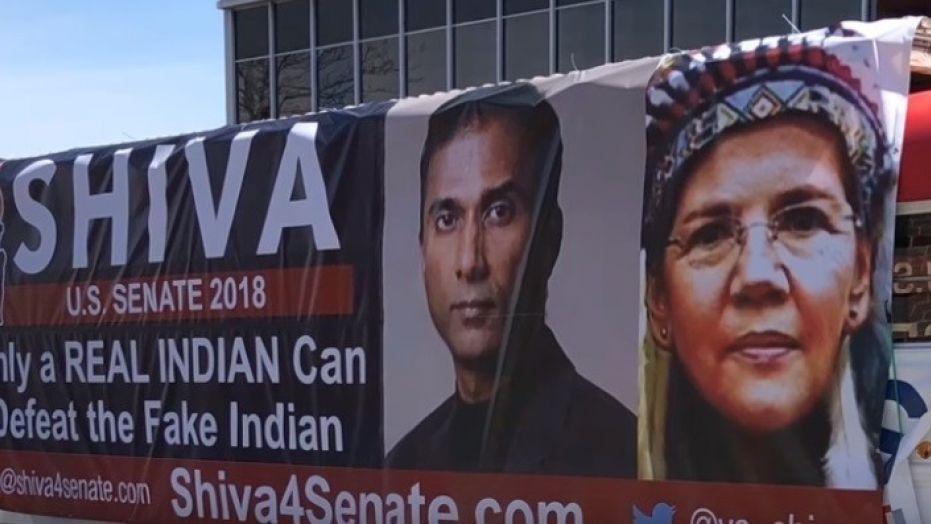 In Massachusetts, there is an independent candidate named Shiva Ayyadurai hoping to challenge Democratic Sen. Elizabeth Warren for her seat in the United States Senate. His campaign website calls him the "personification of the American Dream," based on his trajectory from the "untouchables" caste of India in the 1970s, to receiving his Ph.D. from the Massachusetts Institute of Technology to his political ambitions today. The website also includes a prominent call to action, asking voters to "Defeat #FakeIndian Elizabeth Warren."

And that controversial terminology -- referring to Sen. Elizabeth Warren as a "fake Indian" -- is not limited to Ayyadurai's website.

For over a month, the upstart candidate's campaign bus has sported two identical signs emblazoned with the words, "Only a real Indian can defeat a fake Indian." It's parked in a lot just a mile away from Warren's home. The signs also feature a side-by-side composite photo of Ayyadurai next to an eye-catching Photoshopped rendering of Warren in a Native American headdress.

This, of course, isn't the first time Warren has taken flak from political opponents over her claim of being part Cherokee. In 2012, Warren's Native American heritage was a frequent sparring point of Republican Sen. Scott Brown. And the issue made headlines again in November when President Trump referred to her as "Pocahantas" while hosting an event for Native American "code talkers" at the White House.

In the case of Ayyadurai's campaign sign, however, city officials in Cambridge reportedly took action and served the campaign with a letter from the City of Cambridge's Building Inspector, stating that a fine of $300 per day would be levied against the Shiva 4 Senate campaign if it did not remove the "fake Indian" banner from its campaign bus immediately. The city said the sign violates local zoning code.

Ayyadurai, for his part, feels that the letter represents "an outright attack on the First Amendment and Free Speech," and he's fighting back with a lawsuit.

"We will not allow the racist Warren to unleash her fascists in the City of Cambridge to shutdown our historic slogan, attack the First Amendment, and extort monies from our campaign," Ayyadurai's campaign website now reads in bolded red text. It then goes on to solicit donations from constituents "to support our fight to defend the rights that our American revolutionaries died fighting for" -- all this before gently closing the webpage with the words, "Be the Light, Shiva."