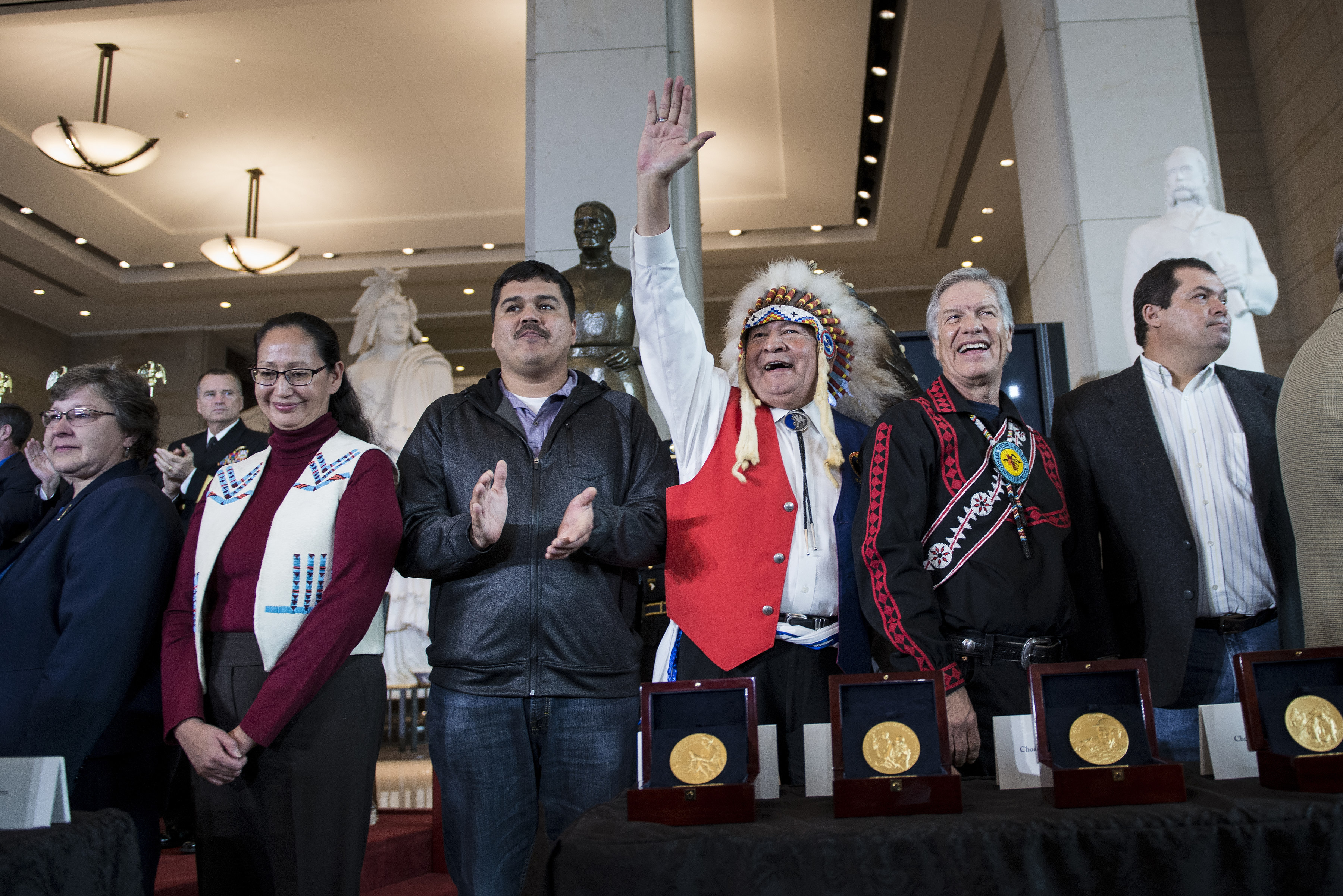 For decades, the wartime service of 96-year-old Edmond Harjo and other American Indian "code talkers" was something that wasn't even officially acknowledged, let alone publically recognized.

But on Wednesday Harjo sat in the Capitol's Emancipation Hall soaking in a standing ovation from hundreds of people - after an introduction from House Speaker John Boehner.

Harjo, a member of the Seminole Nation of Oklahoma, is one of the last surviving members of a group of American Indians who used their native language to outwit the enemy and protect U.S. battlefield communications during World Wars I and II. In a ceremony Wednesday, congressional leaders formally awarded the Congressional Gold Medal to American Indians known as code talkers honoring the service of 33 tribes.

From his seat, Lyle Cook watched the applause for Harjo and a procession of speeches proudly, with a lump in his throat.

Cook is a member of the Cheyenne River Sioux in South Dakota. He said all he could think about were members of his tribe who served in World Wars I and II but didn't live to receive the formal recognition that has been more than 70 years in coming.

"It is wonderful, but it is a bittersweet moment," said Cook, 52, an Army veteran. "I wish they were here."

Members of American Indian tribes heroically exchanged sensitive military information by speaking to each other in their native tongues on the battlefield, eluding enemies trying to break U.S. military codes and dramatically speeding up the military's ability to communicate.

Rep. Ron Kind, D-Wis., said the critical World War II battle of Iwo Jima would have been a far longer, and bloodier, engagement had it not been for the composed work of American Indians during the conflict.

"Over 800 battle field communications went out with perfect accuracy," Kind said of Iwo Jima. "It led to a quicker end to that conflict and it saved lives."

Their distinctive work during both world wars went unrecognized for decades in part because the military, which wanted to maintain its advantage, only declassified the program in 1968. Since then, formal recognition of the program's importance has come slowly.

Congress awarded the Congressional Gold Medal to Navajo code talkers in 2000, then recognized others in 2008. But lawmakers from South Dakota, Oklahoma and other states have long pressed for more tribes to be formally recognized for their wartime contributions.

"These men did not seek the limelight," Johnson said. "And there is no question that their contributions were unparalleled."

One by one on Wednesday, members of Congress came to the stage to praise the bravery of the code talkers, some as young as 15 years old, who volunteered to serve on battlefields in Europe and Asia. They credited them with saving thousands of lives, and praised their abiding sense of patriotism.

Rep. Tom Cole, R-Wis., said the code talkers served bravely, behind enemy lines, even though they were "often barred from full participation in American life."

"They saved lives and they won battles," said Cole, himself a member of the Chickasaw Nation.

Boehner told the story of two American Indians, serving in the European theater, who did not know each other. They began to speak a tribal language to each other and their commanding officer overheard them.

"He immediately put them to work on opposite ends of a radio," Boehner said.

As speakers finished their remarks, Boehner called representatives of the 33 tribes to the stage to receive their medals. The crowd delivered a thunderous standing ovation.

For Cook, of the Cheyenne River Sioux, it was a moment to savor.

"This is our land," Cook said. "We would always serve to protect our country."