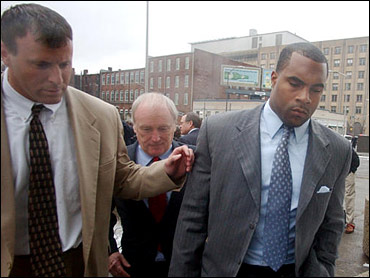 Star NFL running back Jamal Lewis pleaded innocent Thursday to federal drug charges that he tried to help a childhood friend buy cocaine in the summer of 2000.

The Baltimore Ravens' player was released on $500,000 bond after a 15-minute hearing in federal magistrate court. Lewis didn't speak during the hearing, other than answering "yes" when asked by the judge and the U.S. attorney if he understood his rights and his plea.

Lewis, who was wearing a gray business suit, was escorted into the courtroom by U.S. marshals and flanked by four attorneys. Lewis was not handcuffed.

"I am innocent, and I thank everyone for their continued support," Lewis said as he stood in the rain after the hearing.

One of Lewis' attorneys, Ed Garland, added that the same recorded telephone conversation that is being used by federal prosecutors to charge Lewis may instead prove Lewis' innocence. The meaning of the tapes, he said, is open to interpretation.

Lewis had turned himself in to the FBI Thursday morning.

Lewis was indicted Wednesday on charges of conspiring to possess with the intent to distribute five kilograms of cocaine and using a cell phone in the commission of the first count. If convicted on the conspiracy count, Lewis could face 10 years to life in prison.

Garland said he did not try to help a childhood friend buy cocaine in the summer of 2000. Garland said a cocaine buy wasn't discussed during a restaurant conversation more than three years ago among Lewis, a boyhood friend, and a woman who turned out to be a police informant.

No drugs were ever purchased, according to the indictment.

"Jamal Lewis wants everyone to know that he is not guilty, that he has not been involved in drugs," Garland said. "He's extremely disappointed that this is happening."

Ravens spokesman Chad Steele said the indictment came as a surprise to the team. "We had no clue," he said.

In a statement, the team said: "We believe in due process, and Jamal will have his day in court. There are two sides to every story. From what we know of the charges, these seem out of character for the Jamal we know."

The indictment came out of a drug investigation that has led to 30 convictions and helped dismantle a cocaine-trafficking ring in the city, said U.S. Attorney William S. Duffey. He refused to say whether Lewis was tied to that drug ring.

In an affidavit, FBI special agent Hoyt Mahaley said that an informant contacted Lewis on his cell phone on June 23, 2000, to discuss selling cocaine to Lewis' friend. The conversation was recorded, according to the agent.

Jackson and the informant met again on July 12, 2000, at a gas station in suburban Atlanta, the affidavit said. During the meeting, they discussed drugs, but no purchase was made.

Lewis wasn't at the gas station. His attorney, however, said Lewis was at the restaurant, but not for the reason alleged in the indictment.

Garland accused the informant of setting up Lewis and "trumping up what happened" in an attempt to get out of jail. He accused authorities of trying to "create a crime where there isn't one."

A college star at Tennessee, Lewis was the fifth pick overall in the 2000 draft, and signed a six-year, $35.3 million contract with the Ravens that July.

Last year, he became the fifth player in NFL history to rush for more than 2,000 yards. His 2,066 yards fell short of Eric Dickerson's record of 2,105 yards in the final game. He was the AP's Offensive Player of the Year.

In November 2001, he was suspended for four games after violating the NFL's substance and alcohol abuse policy for the second time. The league did not disclose the details of the violation, in keeping with its policy.

Lewis is the second Baltimore Ravens player to face serious charges in Atlanta. In 2000, star linebacker Ray Lewis — no relation to Jamal — was charged with murder along with two other men following a fight.

During the trial six months later, Ray Lewis pleaded guilty to a misdemeanor charge of obstruction of justice. He testified against his two co-defendants, who later were acquitted of all charges.