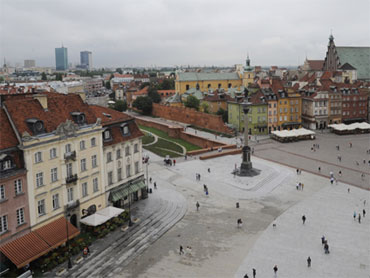 The plane slowly descends from white clouds and sweeps over a panorama of a city destroyed by the Nazis: the skeletons of bombed bridges jutting from a quiet river, the empty walls of burned-out houses, the Jewish ghetto totally flattened.

It is Warsaw in the spring of 1945, just after World War II.

The sea of rubble that Warsaw was reduced to during the war is vividly reconstructed in a 3D film that historians and computer graphics experts showed for the first time in Warsaw on Wednesday.

The goal of the film, which must be seen with special 3D glasses, is to bringing home to a young generation the scope of the wartime devastation of Poland's capital.

"Young people do not understand what it means that Warsaw was in ruins; they think it was just a few collapsed houses," Jan Oldakowski, the director of the Warsaw Uprising Museum, told reporters at a screening of the film "City of Ruins."

"Nor were we, at the museum, fully aware of what the city looked like," he said.

The 1939-45 destruction was the result of bombings carried out by Nazi Germany, which invaded Poland in 1939 and occupied it for six years, killing millions of people. Most of the damage resulted from the German army's revenge for the city's 1944 uprising against its brutal rule.

The uprising failed after 63 days of an uneven struggle, but as one of Europe's most dramatic acts of resistance to Nazi rule remains an important element of Polish national identity. The heroism shown by the insurgents - among them women and teenagers - is a source of deep pride to this day.

Oldakowski said it took 40 specialists two years to make the five-minute 3D aerial view sequence, a simulation of an imaginary flight of a British Liberator bomber over the city right after the war in 1945.

It reconstructs the trajectory that RAF bombers took when bringing arms and supplies to the insurgency. The uprising began on Aug. 1, 1944, and the release of the film is timed to mark the 66th anniversary.

Starting Sunday, the film will be shown to visitors at the museum, which documents the uprising and is a major draw for tourists and students from across the country. Last year, it had some 500,000 visitors.

Michal Gryn, from the Platige Image studio which made the film, said the team was not aware at first of the challenge before them in the form of the masses of documentary material they had to go through.

"It was a unique project to build a 3D model of authentic city ruins and make five minutes of film from it," Gryn said. "I don't think that anyone in the world has done this."

His team took a helicopter flight over contemporary Warsaw to film base material. They filled it in with detail from some 2,000 historic pictures, films and paintings - some from private archives

to recreate Warsaw as it was after the war.

The result is a computer simulation that shows collapsed bridges along the Vistula River, whole districts of roofless, burned-out houses and the Warsaw Ghetto as a flat sea of rubble.

A solemn musical score enhances the sense of death and menace.

An inscription that closes the film says that before the war some 1.3 million people lived in Warsaw, some 900,000 at the start of the uprising and just 1,000 amid the ruins in 1945.

Before the war, some 10 percent of the city's population was Jewish.

Warsaw has been fully rebuilt, including a meticulous reconstruction of the Gothic and Renaissance Old Town. Today it is a bustling city of some 1.7 million, an administrative and business center with many high-rise buildings.