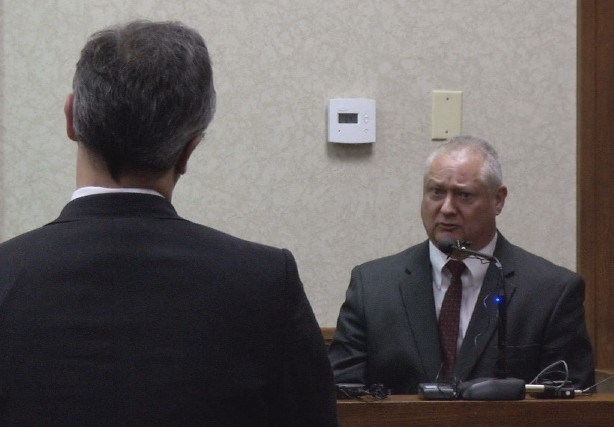 CHATTANOOGA, Tenn. - The high school freshman's injuries outraged the Chattanooga prosecutor: Police said three older members of the basketball team shoved a pool cue into the boy's rectum while on a trip to a tournament, causing injuries that required emergency surgery.

But a police detective three hours away in the resort town of Gatlinburg, where the boy was injured, testified that the case was overblown in the media. He called it a "stupid" kids' misdeed and said it only "happened" to fit the definition of rape.

The jarring disconnect between views of the attack has ignited an unusual public dispute between law enforcement in the two cities, with Chattanooga District Attorney Neal Pinkston going so far as to call in state investigators to probe what he called the "perjurious testimony" of the Gatlinburg detective.

The Chattanooga police chief even posted a Facebook diatribe, saying that "the allegations and charges clearly constitute rape. Period. For anyone, including a police officer, to suggest otherwise minimizes the severity of this incident, the experience of the victim and, ultimately, makes life more dangerous for current and future victims."

The public display of angry disagreement is a rare instance of a conflict between law enforcement agencies breaking out into the open. Experts say officials ordinarily try to work out their differences behind closed doors.

The conflict also highlights a public debate over hazing, pitting a "boys will be boys" attitude against a growing concern that behavior once dismissed as harmless can cause real damage. Susan Lipkins, a psychologist who has written a book about hazing, said the Gatlinburg detective is "part of a group of people who want to maintain the status quo," she said. But she said children should not have to be hazed or sodomized to play on a team.

Gatlinburg and Chattanooga officials agree on some basic facts, just not on what they mean.

Gatlinburg Detective Rodney Burns testified that during a tournament in the Smoky Mountains town just before Christmas, three older boys held down four younger players and pushed a pool cue against their rectums on the outside of their clothes. The abuse went on for several days until a freshman player's pants and underwear ripped and the pool cue tore into him. Police have said the teenager needed emergency surgery to repair his rectum, bladder and prostate gland.

In court, Burns testified, "What this case actually is is much smaller than what it's been blown up to be. To me it was an assault. It wasn't sexual in nature, his pants weren't pulled down, they weren't doing it for sexual gratification, this was something stupid that kids do that shouldn't have been done, you know?"

The three older players are charged with one count each of aggravated rape. Burns said in court the cases of the other three boys who were held down do not qualify as sexual assault because there was no penetration.

The Chattanooga prosecutor, however, told the judge, "I think it is clear there were four sexual assaults that occurred."

Pinkston has no authority to pursue charges against the teenage suspects in the three other attacks in Gatlinburg, but he has sought to prosecute three Ooltewah High School officials who accompanied the teens to the tournament. They are accused of failing to report the assaults to proper Chattanooga authorities. The judge has sent the charges to a grand jury.

Chattanooga police Chief Fred Fletcher criticized the Gatlinburg detective's testimony on his personal Facebook page. In the message, which the Chattanooga Times Free Press posted on its website, Fletcher says, "The allegations being adjudicated against several young men in our community constitute rape. Not simply hazing, or bullying, or teasing, or horseplay. Rape. A violent crime."

Eugene O'Donnell teaches law and police science at the John Jay College of Criminal Justice in New York and has worked as both a police officer and a prosecutor. He said conflicts like this between law officials are almost always worked out behind closed doors.

"That there's prosecutor-police tension is not shocking, but it is shocking to have a prosecutor publicly proclaim that an officer is involved in perjury," he said.

Public outrage could also cost the Chattanooga-based Hamilton County schools superintendent his job after students revealed the attacks were part of an ongoing pattern of abuse that included beatings. Superintendent Rick Smith is negotiating a buyout that could have him step down as early as next month.

Jimmy Dunn, the district attorney general whose jurisdiction includes Gatlinburg, did not return a call from The Associated Press.

Attorneys for Burns issued a statement defending the detective, saying he testified appropriately and filed the appropriate charges in consultation with Dunn's office. The statement also accused Pinkston of using the case to further unspecified political ambitions.

CBS affiliate WDEF in Chattanooga reports Burns' statement goes on to say: "General Pinkston seems more concerned with his own publicity than the well-being of the victims of these assaults. He has needlessly injected himself into this case for his own political ambitions at the cost of victims, pursing a seasoned detective who worked diligently and effectively to charge the perpetrators."

Pinkston countered that he has no ambition other than to serve the people of his district.

The assaults in Gatlinburg would absolutely be seen as sexual if the same thing had happened to a girl, said Lipkins, the psychologist. And teenage boys are reluctant to admit they have been sexually assaulted.

"It's the most humiliating thing that could happen," she said. "And that was why it was done."