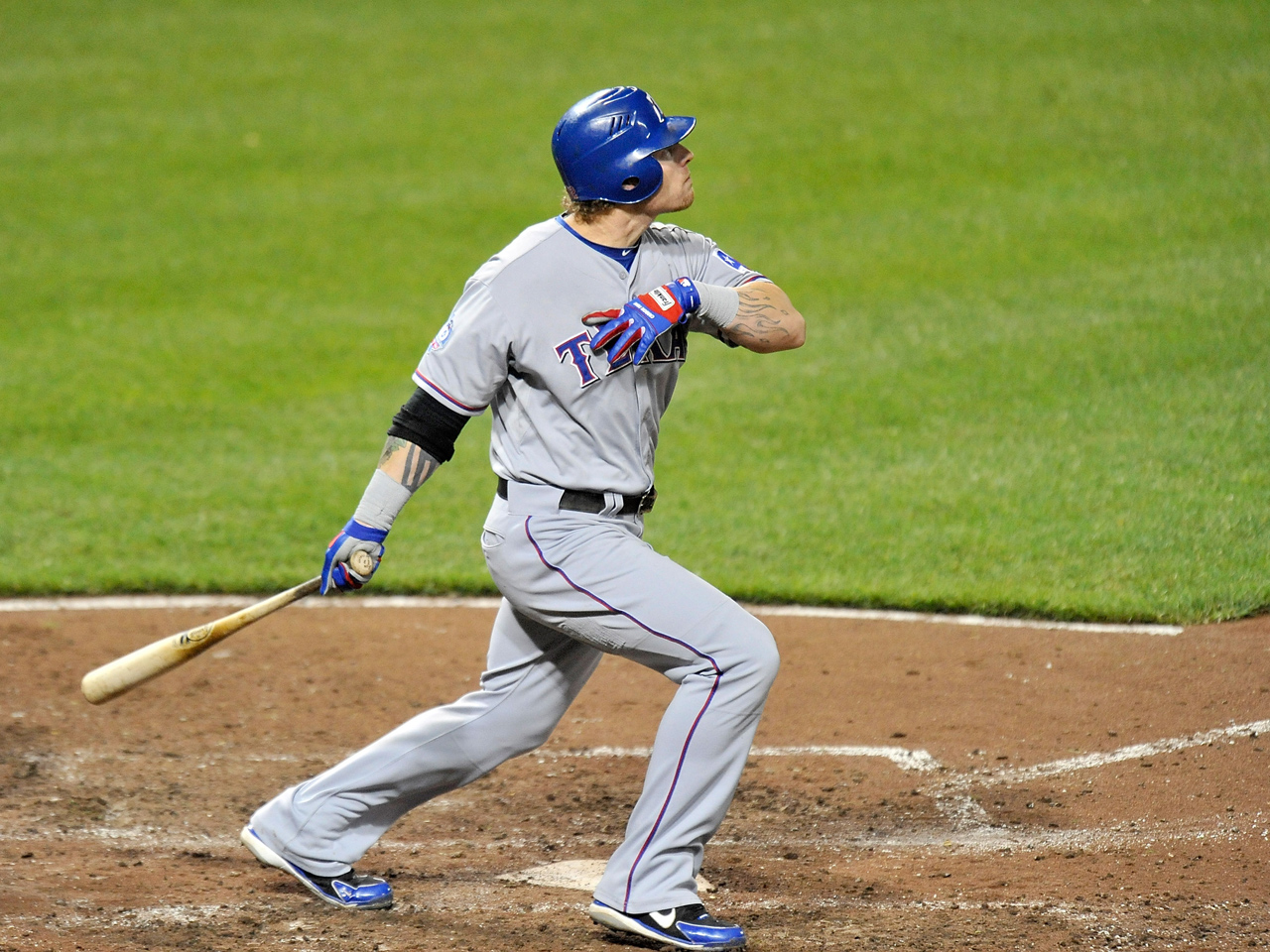 (AP) BALTIMORE - Moments before he made history with his final swing in an incredible four-homer performance, Josh Hamilton stepped to the plate in the eighth inning with a surprising sense of calm.

The Texas Rangers slugger had never before hit more than two home runs in a game, and he already had three. So as he took his place in the batter's box against Baltimore right-hander Darren O'Day, Hamilton already had a feeling of accomplishment.

"I just went up like it was any other at-bat because if I don't hit one," Hamilton reasoned, "I've still had a really good night."

It turned out to be unforgettable.

Hamilton became the 16th player to hit four home runs in a game, launching a quartet of two-run drives against three different pitchers to carry the Rangers to a 10-3 victory Tuesday.

Hamilton homered off Jake Arrieta in the first and third innings, added another off Zach Phillips in the seventh and topped it off with a one-for-the-books shot against O'Day. During the last at-bat, Hamilton took a mighty hack and missed, lined a foul into right-field seats and then sent an 0-2 pitch over the center-field wall.

"Obviously it's, other than being in the World Series, the highlight of my big-league career," Hamilton said. "I was saying after I hit two I've never hit three in a game before, and what a blessing that was. Then to hit four is just an awesome feeling, to see how excited my teammates got.

"It reminds you of when you're in Little League and a little kid, and just the excitement and why we play the game. Things like that. You never know what can happen. It was just an absolute blessing."

Hamilton also doubled in the fifth inning. His 18 total bases is a new single-game American League record, and his eight RBIs are a career high.

"It's like anything else — you do something good or something incredible happens, it takes a little bit for it to sink in," Hamilton said. "I think when I get away from everybody and I have some time to myself, I think it might then."

Hamilton is the sixth AL player to perform the feat. The last to hit four homers in a game against the Orioles was Rocky Colavito in 1959, at old Memorial Stadium.

"He's the best athlete in baseball," teammate Nelson Cruz said of Hamilton. "If anybody can do it, he can do it."

Elvis Andrus got on base ahead of Hamilton in each instance, said, "He kept hitting bombs and bombs. It feels really good because I don't have to run that hard to score."

Hamilton, who is in the final year of his contract and could become a free agent after this season, leads the AL with 14 homers and 36 RBIs, and his 5-for-5 effort raised his batting average to .406.

He also set the Texas single-game club record with five extra-base hits, breaking the mark of four held by eight players. Hamilton has homered in five of his last six at-bats, counting his final trip to the plate Monday night.

Hamilton's record-setting night is the latest accomplishment in a career that almost never was.

He went from first round draft pick in 1999 by Tampa Bay to out of baseball all together because of drug and alcohol addiction.

He recovered and returned to the majors in 2007 with Cincinnati, and was traded to the Texas, where he has become a star — the AL MVP in 2010 — while still battling his addiction. He had a relapse before this season, but is off to a torrid start.

"Understanding that what I'm doing and what God's allowed me to do coming back from everything I went through and allowing me to play the game at the level I play it, it's pretty amazing to think about," Hamilton said.

Adrian Beltre also homered for the Rangers. Coming off a 14-3 win in the series opener, Texas has won two straight for the first time since April 24-25 and are 20-10, their best-ever record after 30 games.

Dating back to last season, Texas has won seven in a row over Baltimore by a combined 70-18 score.

Rangers starter Neftali Feliz (2-1) gave up one run on four hits and had a career-high eight strikeouts. Converted to starter after notching 72 saves over the previous two seasons, Feliz had a 2-0 lead to protect before throwing his first pitch and maintained the advantage — just like when he was closer.

The Orioles entered the series with the best record in the majors after a 5-1 trip through Yankee Stadium and Fenway Park, but they have looked more like a team with 14 straight losing seasons in these two games against the two-time defending AL champions.

Arrieta (2-3) allowed six runs and nine hits in 6 1-3 innings. He yielded a career-high three homers, matching the total he surrendered in his first six starts this season.

His most notable flaw was his inability to keep Hamilton from hitting the ball out of the park.

"It was the first time I've ever seen anything like that. Very special hitter," Arrieta said on Hamilton. "He didn't miss tonight."

J.J. Hardy and Nick Markakis hit consecutive solo homers for Baltimore in the eighth, long after the outcome had been decided.

The Rangers jumped out to a 2-0 lead in the first inning when Andrus drew a one-out walk and Hamilton hit Arrieta's next pitch over the center-field wall.

It was more of the same in the third, and then some. After Andrus reached on a chopper off the plate, Hamilton lined an opposite-field drive into the left-field seats. Beltre followed with this sixth home run, the fourth time in 30 games that Texas has homered in successive at-bats.

Andrus singled in the seventh before Hamilton sent a drive over the center-field wall against Phillips, who was recalled from Triple-A Norfolk before the game.

After that, the only suspense was whether Hamilton would get another at-bat. He did, and made it count.