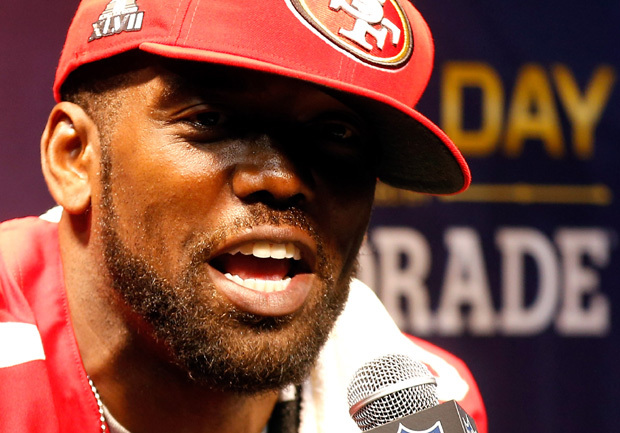 Super Tuesday (aka Super Bowl media day) is a generally a time for players to speak in cliches, reflect on their careers and crack jokes.

Or, in the case of San Francisco 49ers wide receiver Randy Moss, it's a time to declare yourself the greatest ever at your position.

It's obvious that Moss doesn't rely heavily on numbers because they don't back up his claim. Statistics say another player who wore the 49er uniform - Hall of Famer Jerry Rice - is the greatest wide receiver of all time.

Rice finished his career with 1,549 receptions, 197 touchdown catches and 22,895 yards. The 35-year-old Moss has tallied 982 catches, 156 touchdowns and 15,292 yards in his career. Moss, who came out of retirement last year, had 28 receptions for 434 yards and three touchdowns in the regular season for San Francisco.

"Moss is an otherworldly talent and one of the greatest wideouts the NFL has ever seen," writes CBSSports.com's Will Brinson from New Orleans. "But the greatest? Naw. That's Rice."

For the record, Rice is a guy who believes in statistics.

"Put my numbers up against his numbers," Rice told ESPN's Adam Schefter after hearing about Moss' bold declaration.