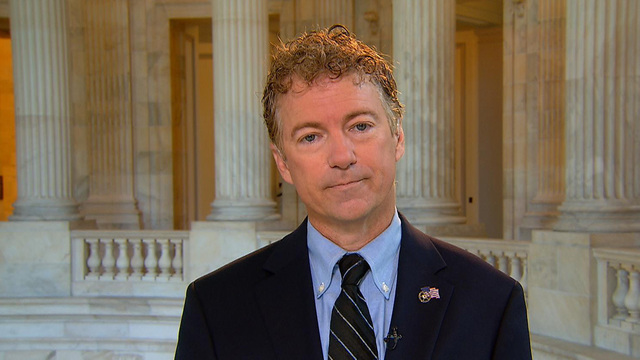 Presidential candidate Rand Paul is planning to sign the Republican National Committee's loyalty pledge and forego a third party run -- and is cautioning that if Donald Trump doesn't sign it, the billionaire could hand a 2016 victory to Democrats.

"What I don't like about Donald Trump is his using the Republican party and then perhaps going out at the very end after he doesn't win the nomination and then trying to destroy the Republican party," Paul told "CBS This Morning" early Thursday. "Ross Perot, you know, ended up giving us the first Clinton and I think that if Trump does this again, he could give us another Clinton."

Others in the party, like Wisconsin Gov. Scott Walker and former tech executive Carly Fiorina, also received the pledge and have declared their intention to sign it. Trump is set to meet with RNC chairman Reince Priebus Thursday to discuss the loyalty promise.

While Paul has yet to discuss the pledge circulated by Priebus, the Kentucky Republican would, "in all likelihood," put his name on the document.

"We have said in the past that I am not going to run as a third party candidate," Paul added. "And I think that is a reasonable pledge to take."

He did, however, express sympathy for third-party candidates because "sometimes the two parties don't do a very good job."

"Third parties do provide pressure on the two parties to do better, actually," Paul said. In 1988, Paul's father, former Texas congressman Ron Paul, announced his presidential candidacy as a Libertarian.

The Kentucky Republican also weighed in on Kim Davis, the Rowan County clerk defying the Supreme Court ruling on same-sex marriage and refusing to issue marriage licenses to gay couples.

"If society is going to change its opinion on what marriage is, I think it'd probably be better through persuasion than through sort of an aggressive tactic where we federalize everything and force people to do things they don't want to do," Paul said, defending the Kentucky clerk's resistance. "Ultimately, I think it would be better to probably let people make their own decisions."

Kim Davis and her deputies are slated to explain to a federal judge why they shouldn't be held in contempt of court, even though they continue to defy the justices.

But Paul cautioned that if same-sex marriage advocates "push too hard, they're actually going to make things worse."

"I think persuasion is a much better way than sort of bullying people to believe in what you believe in," he said.

Others in the GOP, however, have advised that Davis' actions are inappropriate, given her position as a government official.

South Carolina Sen. Lindsey Graham said Turesday that "as a public official, comply with the law or resign," while New Jersey Gov. Chris Christie added that someone working in goverment "has a bit of a different obligation than someone working in the private sector."

Nationwide, clerks in 13 counties are refusing to issue marriage licenses to same-sex couples, including nine in Alabama, where the chief justice of the State Supreme Court is strongly opposed to same-sex marriage.

"Scary": California community close to running out of water